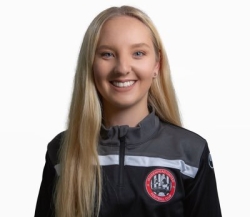 How would you summarise your season so far?

I think we have had a season of ups and downs but with moments of excitement having beaten many of the top teams at home and caused an upset. We can be proud that we have sustained our place in the National League and rebuild ready for next year now.

How’s the team’s recent form been?

Mixed as with many teams in our position and at this stage of the season.

What’s been the highlights of your season?

As I mentioned before, having those results at York Road against sides at the top of the table and in the play-off positions was great. The atmosphere was electric and it gave the whole team a real confidence boost.

I can’t single anyone out but as a group, we are a real physical side that won’t shy away from getting involved in all areas of the pitch and working together to get a result. Gyollai has returned from an injury and I can’t wait to see his back in action between the sticks for the Magpies!

You have a poor away record, why do you think that is?

Many teams tend to have a poor away record when compared to home, especially in the National League. Maybe this comes down to the size of a stadium, the journey, and balancing the football with full-time jobs (which our players do consistently).

Will many supporters make the trip down?

Our travelling supporters are absolutely class! The noise they make at every stadium we go to really make a difference and represents the town and football club around the country week in and week out.

What tactics does the manager like to use and what’s your likely line-up?

I can’t give that away and nor will Dev! We are sometimes forced into changes due to injury and our smaller squad size may impact the formation and game plan but overall the gaffer does a great job of using everyones strengths.

Would you say the season has been a success considering how competitive the league is?

Definitely! We have opened the turnstiles once again to our supporters after COVID last year and put on some great team displays. We have had our ups and downs as with any team, especially in this league but our main aim has been achieved and now we kick on for next year.

Personally, I would have to say Stockport County. They are such a well-drilled side with real class and I really enjoyed watching them play their football.

And finally, what’s your prediction for Saturday’s game?

I am going to go with a 2-1 Maidenhead win, Kelly and Sparkes with the goals!