Prior to Aldershot on Tuesday night, I think we all agreed that 6 points from the next two games were an absolute necessity, and the Gulls delivered. 7 goals in two games and none conceded, goal difference improved and gap to 7th decreased = Perfect. Here’s my talking points for Weymouth (h):

I think it’s fair to say that the attacking midfielder had got bogged down since his arrival from Sunderland in January. The move from U-23 non-contact football to the plenty of contact National League is not an easy jump, and players who see the 5th tier as easy pickings are in for a surprise! Gary Johnson has kept playing Wearne, kept pushing him to make an impact and has been rewarded in the last two games. A deserved man of the match on Saturday, Stephen loves to collect the ball on the left and get a shot in – and the first goal gave United a great start. With confidence up the young lad now needs to translate this to tougher occasions, but much like the entire United squad he’s feeling good and ready to go in the last 9.

It’s a lot to ask of a lad to play 3 matches in a week or so after a lay-off from football, and so it proved for Opi Edwards on Saturday. Gary Johnson clearly rates Edwards and wants to get him up to speed for the run-in, but Opi’s first half was littered with too many errors and just saw the winger off the pace of the game. Two weeks now for the little winger to sharpen himself up on the training pitch and try to ensure he remains in the first XI for Notts County. I’m not sure that Edwards suits the wing back role, however the boss does like the formation and without suitable alternatives it looks like his best way of impressing the gaffer.

Over 2500 in attendance on Saturday, which is an excellent figure and a sure sign that the Yellow Army haven’t given up on the dream of making the 2022 NL play-offs. The number was helped by the Lottery ticket offer, but with the sun shining and the team having beaten Shots 4-0 only a few days earlier, why not go down and support the Gulls. The atmosphere felt somewhat subdued at times, almost like a starter before the main course against Notts County. With County likely to bring down a large away following and the significance of the game for our play-off chances (6 pointer alert!), I’m expecting much more noise that day….just a shame it’s two weeks away!

It’s been a mostly frustrating season for Danny Wright. A season of injuries mixed with games where the striker just couldn’t influence proceedings and the Gulls couldn’t feed him like 2020-21. What he has remained his pivotal to Torquay United. With no alternates trusted we’ve desperately needed the striker to find form and in recent weeks it’s happened. Wrighty looks fitter and stronger in the last batch of games, becoming the handful for defenders that we are used to seeing. His performance against Shots was worthy of a goal, so it was nice to see him nod one gratefully in on Saturday. Much like Sillsy years ago, Danny always gives everything for United, always shows for the ball and always grinds away for the team. Plenty of fight left in the striker yet.

Thoughts now turn to bigger tests to come for United. Two weeks between games isn’t ideal for Gary Johnson. With two wins, the squad looking fit and momentum with us, I’m sure he’d love the Notts County game to be next Saturday. But it gives the gaffer time to work on the training pitch and time to formulate his plans for the coming games. Who can forget Kyle Cameron turning up on the left wing in the 2021 play-offs? Well GJ could perhaps surprise Notts again! After that we have a trip to Woking, which although remembered for the magic of Wynts, is normally a testing trip and they’ll have new boss Darren Sarll riling up the Cards this time around. I’m proud of these lads, we could have melted away into the National League abyss but they keep plugging away and keeping finding results. We have form, we have the best manager around and we have hope – considering our woeful start to the season that is pretty good isn’t it. 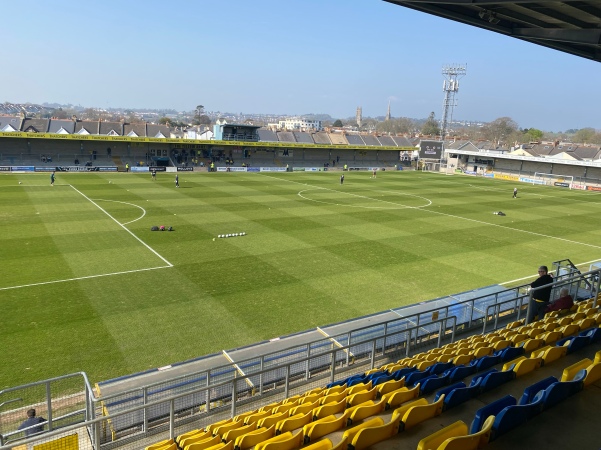 “The next game is like last year’s play-off game against Notts County. This stadium should be full because that is a six-pointer for sure” – GARY JOHNSON