Danny discusses the Top 3’s of the season so far……

Fourth game of the season and the Gulls were looking for their first win of the season. Home defeats to Altrincham & Woking did little to convince the Yellow army of the current squad.

Rampant Torquay went 2 up inside 20 minutes thanks to a Armani Little brace, and further increased their lead with goals from Hall & CLE. Maidenhead did fight back in the second half and in true Gulls fashion set up a nervy finish. But Torquay hung onto to secure their first 3 points of the campaign.

A fairly bland game sprung into life in the second half when Chesterfield’s talisman Tshimanaga helped himself to two goals to put the home side on course for a routine home win. Torquay had other ideas as they got back into the game 2 minutes from normal time, through Little’s quick feet, and in true Gary time style, Lapslie netted the equaliser in the 5th minute of stoppage time.

Wasn’t difficult to pick this one out. Any game that ends in a 5-0 victory will take some topping. After some indifferent form, Torquay headed into the game knowing a win was vital to lift the mood of both the fans, and the players.

The Gulls duly obliged by netting 4 first half goals courtesy of Lapslie, Holman, Little & Lewis. Holman added to his tally in the second half and United hit 5 without reply to record a thumping victory.

Holman gets the nod in at #3, just ahead of a few others. A sweet turn and shot in a very congested Wealdstone box, gave Holman his first TUFC goal and a vital 2-0 cushion at the time.

I’ve opted for this one through sheer importance. What was turning into a frustrating day at Plainmoor, Torquay couldn’t force that ball into the Southend goal. Not for the want of trying. But, after a lovely teasing ball in from Moxey, Connor was on hand to slot in at the back post and give us that vital 3 points.

Where there was contention for places 2 and 3, there was nothing of the sort for top spot. Lewis with an absolute banger, that had it been scored in the PL, would have gone down as one of the greats. Intercepting the ball in his own half, the big Welshman strode forward and unleashed a spectacular effort from all of 30 yards out into the top right hand corner. Take a bow.

Notable omissions: CLE’s strike at Maidenhead to make it 4-0 was sublime. A fantastic switch from Little allowed Evans to cut in and unleash a thunderbolt with his left peg. Little’s effort at Chesterfield to get us back in the game was also unlucky to miss out. A neat finish after some silky feet.

CLE capped off a great move to give the Gulls a share of the spoils at the Hollywood party. After great hold up play by Armstrong, and a telling pass from Lapslie, Chiori provided a superb cross on a sixpence for the onrushing Lemonheigh-Evans to head home.

Gulls 3 nil up in Berkshire, and Little having the game of his life. Having already secured a brace, the midfielder beat his man on the left, before playing a delightful 50+ yard cross field pass to Connor who duly did the rest.

Obviously CLE has a habit of finishing off great assists. As mentioned above, Moxey with a delightfully dangerous cross right across the six yard area for anyone to attack, and thankfully Connor was on hand to tap it into an empty net. A goalkeeper’s nightmare, an attacker’s dream.

Notable omissions: Holman’s assist for Little’s goal at Chesterfield was both clever and important. A neat backheel found the galivanting Little who slotted home.

When you are 2 down with 88 minutes on the clock and you come away with a point, you are bound to be happy. Unfortunately it was a 17.20 KO which hampered the Yellow Army contingent, but the guys and girls that did go, certainly did the club proud.

4 up at half time, even the most ardent of TUFC fan would be sceptical of a comfortable second half. And so it proved. Although the Magpies hit back with 3 goals, Torquay grabbed their first win on the road in front of a superb away following.

The eagerly anticipated trip to Nottinghamshire did not disappoint. In front of a near 7000 crowd on this bank holiday weekend, Torquay took the lead through a Danny Wright header. In fine voice, and some ‘deliberate’ chants aimed at one or two of our former players, the 10 men Gulls held onto a creditable point, once again backed by tremendous support.

Not even going to do a 3, 2, 1 on this one. The monster hot dog I had here was immense. The match and result unfortunately wasn’t as good. Best food i’ve had at a game. Period.

BW showed why they are near the top, with some neat passing and finishing which frankly the Gulls couldn’t compete with. A routine 2-0 win for the home side and a Torquay side miles off the pace.

You’d be forgiven for a side just relegated from the Football League to have a bedding in period. Grimsby needed no such thing, unlike Southend, as they comprehensively beat an out of sorts Torquay 3-1 at Plainmoor.

As much as Torquay were poor, and I mean utterly woeful, any team that comes to your patch and scores 4 are decent. We’ve had our run ins with Woking over the years, but credit where its due, on that day, Woking were head and shoulders above us. Disastrous day.

Lovely kit to be fair. The combination of white and blue works well. Their team maybe misfiring, but their shirt manufacturer’s certainly aren’t. 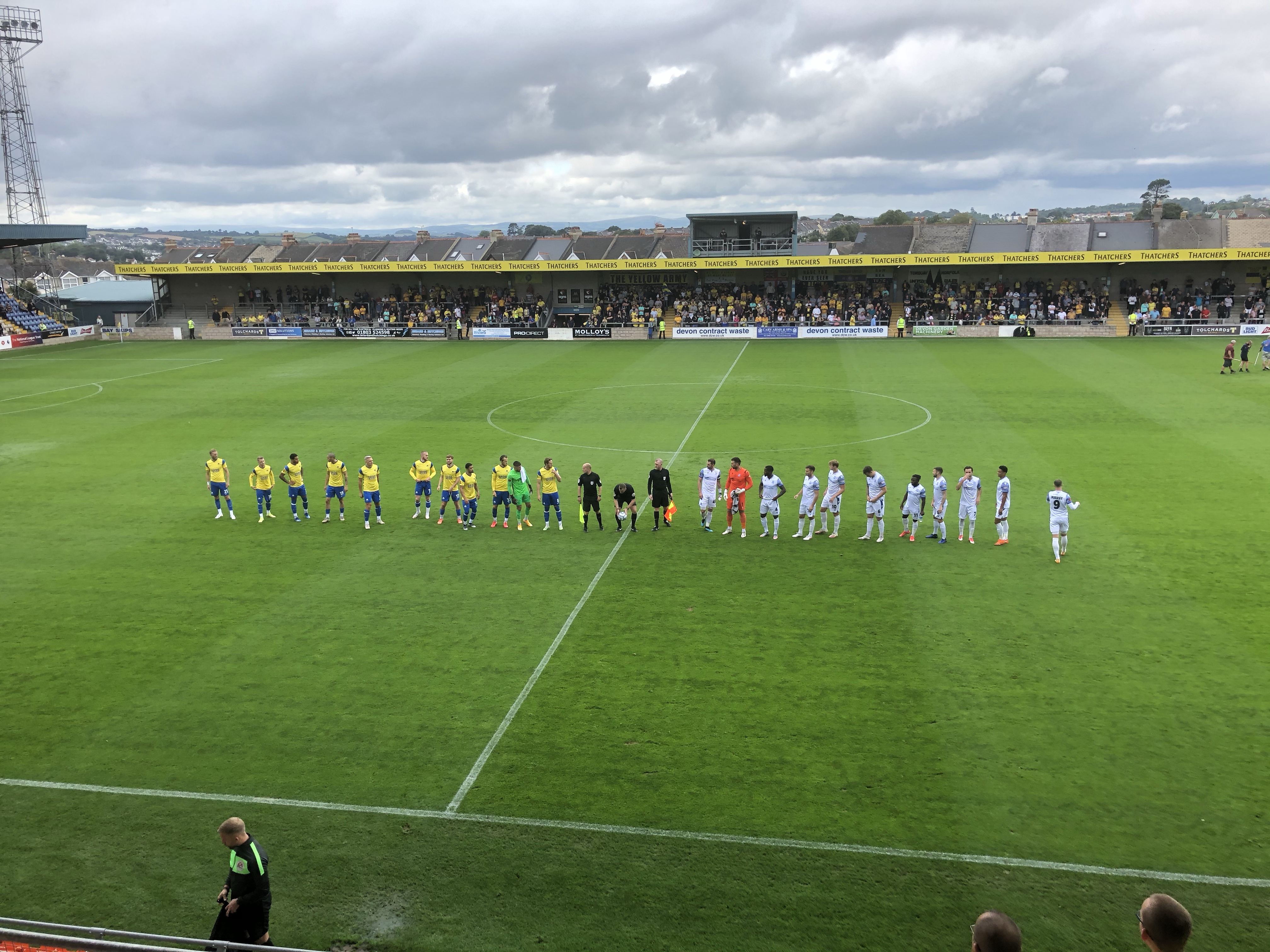 Unusual colour for a Torquay kit and a bit marmite, but certainly gets the thumbs up from me.

A bow to our ‘Magpie’ days, and a throwback to the Sparkworld kit of 2003, the first away kit I owned. Beautiful kit which I hope is used more often.