Another late goal, another party pooped, another handy away point. Almost ten thousand North Walians turned out to see their compatriot Connor Lemonheigh-Evans perform at their home ground, and though the little master kept his talents under wraps for most of the game, he gave the fans what they wanted in the 84th minute with a brave equalising header. Most inside the ground went silent after that, though, presumably because they were so stunned by the talent on display.

A raucous atmosphere at the Racecourse ground was only amplified in the first ten minutes as Wrexham took the lead. A long throw from notorious one-trick-pony Ben Tozer bounced around in the Yellow area and was finally blasted home by Harry Lennon. Imagine.

Without wishing to defeat the object of a match report, that is basically all that happened in the first 80 minutes of the game. There were so few clear-cut chances that the Yellows’ first shot on target came after at least an hour. A fantastic tackle from The Lemon towards the end of the first half saved himself a red card, and his team a goal, but that was the only time we were ever really opened up. Neither team had any real quality on display, both relying on throw-ins (Wrexham’s was longer than ours, I’m afraid to say) and set-pieces (Wrexham’s were considerably better than ours, but still not particularly dangerous) to make anything happen.

As the game wore on, it looked increasingly like we were rolling over. Wrexham were bad, but we weren’t good enough to trouble them. Substitutions changed that. Tom Lapslie added some bite to the midfield, debutant Byron Moore looked assured and composed on the ball, and Alex Addai provided some much-needed directness and speed in the final third.

But the cross for the decisive goal came courtesy of a different pace-merchant. Chiori Johnson, who had been moved to right back having started in midfield, delivered a delicious ball for The Lemon whose bonce did the rest. Ear cupped. Crowd Silenced. Piss Boiled.

A couple of corners at each end kept both sets of fans (those who were still watching the game and not each other) interested for the remaining 6+6 minutes, but neither side earned or deserved a winning goal before the final whistle. As home supporters very slowly drifted out, while Yellows were kept back in our shack, one of the North Americans in whom I’m supposed to be interested wandered over to applaud. It’s fair to say he got the ovation he deserved from the Gulls’ faithful. Seriously, though, who the [redacted] hell is he? 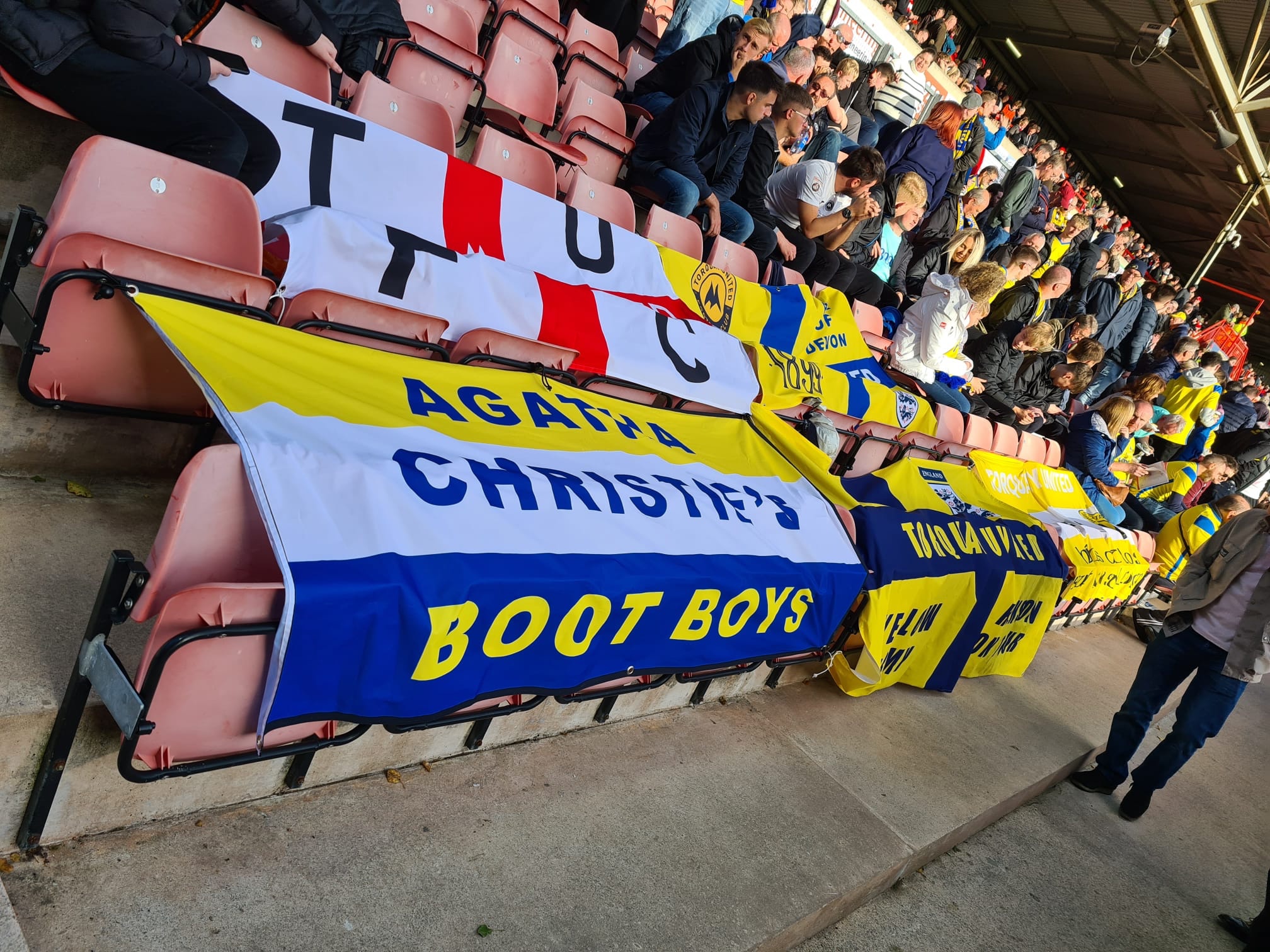 Shaun MacDonald 7 – Will probably go under the radar in this one, but I thought Shaun had a good game. Though he was rarely challenged by shots, his claiming of crosses/throws was the best I’ve seen from him. This included one in the dying seconds, where the ball was about as far out as you can expect a ‘keeper to come, but he did so with communication and confidence. Deserves enormous praise on what could have been a tricky afternoon for a less dominant custodian.

Ben Wynter 5 – Had a mare, bless him. Gave the ball away a lot. Weirdly looked better when he moved to centre back, not that that’s his best position at all. Put it down to “if he didn’t have bad days, he’d be playing in League One.”

Harry Perritt 5 – Barely noticed him first half. Put in a baaaaad challenge at the start of the second and was booked. Seemed fair to take him off; wasn’t worth the risk with 10,000 Welsh men and women already on the ref’s back.

Joe Lewis 7 – A solid performance from the other national stomping ground returner. Good in the air: played them at their own game well.

Dean Moxey 6 – Gave the ball away a bit too much and was possibly static for their goal (though I’ve not seen a replay).

Chiori Johnson 7 – Probably the best I’ve seen him play. I think he really suits playing at the back of midfield, just running around a lot, snuffing out what he can, giving the ball to more gifted players as soon as possible. That said, it was his gift of a cross from right back that got us back in the game. Definitely a player there. More of this please CJ.

Armani Little 5 – Like Wynts, I think he’d be the first to admit he had a mare. The pair of them are lucky we pulled it back because they’d both be getting far worse ratings if I was reporting on a dreary 1-0 defeat. Buy The Lemon a pint (and maybe let him take a corner sometimes).

Dan Holman 5 – Will get to it in the tactics section, but he wasn’t playing as a number 9 and that didn’t suit him. Barely touched the ball in fairness.

Connor Lemonheigh-Evans 7 – Was one of the livelier wires (in a box of extremely unlively wires), but also lost the ball too often. Goal and celebration more than make up for it. The only celebrity I was there to see.

Klaidi Lolos 6 – Not great, not bad. Also one of the livelier ones. It won’t come off for him every week, and that’s ok.

Sinclair Armstrong 6 – Had absolutely no service at all but worked hard and forced the issue a few times. A pleasure to have him in the side.

Tom Lapslie 6 – Was going to say he did very little, then I saw a replay of the goal and his pass to Johnson was lovely. Classic Lapslie performance other than that. Tenacious, generally good.

Byron Moore 6 – Could tell, even from glimpses, that he’d played at a higher level. Has a really calm head on his shoulders. Will come good.

Alex Addai 6 – A joy to have him back on the pitch. Did exactly what he did in his Chesterfield cameo: took people on, won a few corners, just livened up a side who looked dejected.

Do you agree with Matty’s ratings? Vote here

Man of the Match – Connor Lemonheigh-Evans

The Lemon just takes it, though all of those with a 7 staked a claim. Nobody really stood out: whisper it quietly but it was a pretty poor performance all round. But he got his goal and shut his rowdy, missile-throwing compatriots up so for that he can take it.

It was a 4-2-3-1. Johnson and Little sat behind, then the front four rotated quite frequently, with Armstrong and Lolos sharing the number 9 role. It worked fairly well, though lacked width, and Wynts would argue that he gave the ball away so often because he never had an option down the line. Subs changed it, with Wynter moving to CB, Johnson to RB and Lapslie in midfield. Moore and Addai looked more comfortable in the wide areas than those who came before them.

Their fans sang a lot about promotion and winning the league. I know everyone does this to an extent, and there’s a natural sense of optimism around their club at the moment, but their players are nowhere near the standard required to top this table. Perhaps they missed Mullin, but the striker who played had no chances so maybe that wouldn’t have made a difference either. No threat other than the set piece. You could argue that they might be a good playoff team (one good goalscorer, solid at the back, lots of big lads, dirty long throw filth), but on yesterday’s evidence they’ll do well to finish 7th. My prediction is, as was sung by the Gulls fans, we’ll see them next year.

Wrexham had two penalty shouts, both rightly waved away. Rightly booked Parkinson for his protests on the second one. No other big decisions.

I’ve just noticed that I started my last match report with “death; taxes; Torquay being poor for 85 minutes and nicking a point”. At least this time we were only poor for 83.

In truth, yesterday’s away trip was more about the day than the game. My old man’s got the honour of writing the TT Groundhopping blog and I’m sure that fine collection of (mostly) boozy anecdotes – and it was an anecdote-heavy day – will be far more entertaining than this run-of-the-mill report on a boring game. But we can take from it that the gruesome Yellows are still going, still keeping on, still stinking the place up. There are very few better joys than going to a busy (well, three-sides-busy) ground, expecting very little, being told we get battered everywhere we go, nicking a cheeky point and royally ruining 9,000+ people’s day.

I’ll repeat, we do need to be better if we’re seriously going to be play-off contenders. But yesterday was yet another spirited draw away to a supposedly good team, and for that we should be proud. We’ve got Dover, Barnet and Aldershot next up. Three positive results there and suddenly we’ve got ourselves a decent place in the table and a bucket full of momentum. For now, let’s revel in the fact that we’ve made one documentary a little bit less glamorous. It’d never live up to the Champions doc anyway.