Death; taxes; Torquay United being poor for 85 minutes then nicking a point.

A delicate move and finish from Armani Little and a last-minute goal-line scramble were enough for the Yellows to claw a draw from the jaws of defeat in front of the BT Sport cameras, after being deservedly 2-0 down with ten minutes to go. The Spireites will feel hard-done-by, but also deeply disappointed by their capitulation in the dying moments.

The first half was more even than the second, though Chesterfield still saw most of the ball. Pantomime villain Stefan Payne spurned a decent headed chance, but otherwise United defended resolutely and kept the opposition’s threatening looking strike partnership quiet. The best chance of the half fell to the Yellows: Lolos got on the end of a long ball and found himself, more by luck than judgement I think, in on goal. The former-Argyle man had two tickets in that particular raffle, but both shots were well-saved by Loach.

The general mood at half-time was “ah, they’re probably better than us but we’ve defended well and could nick this.” Then we conceded. A cross came in from the left, which MacDonald scrambled across to. At full stretch, his palmed effort landed straight into the path of Kabongo Tshimanga, who is a man you can’t give the ball to 10 yards out. His finish was emphatic.

The game looked dead. I was planning my sharp exit for the train, the Chesterfield fans were singing with glee, and their players looked comfortable and in control. Everyone in that equation had forgotten one crucial factor, though. Gary Johnson’s teams don’t give up.

Armani Little picked the ball up in outside the penalty area, and manufactured a slightly stunted one-two with substitute Dan Holman. But there was nothing stunted about the rest of the move: the number ten danced inside and caressed the ball towards the ‘keeper’s right. 2-1. Consolation goal, hope that kills you, etc.

No. The fourth official raised his board to signal five minutes of additional time, and after four and a bit of those minutes the Gulls won a corner. Shaun MacDonald went up, hoping to replicate his former colleague’s antics on a much much smaller scale. Such heroics weren’t required. For probably the first time in the game, the corner was accurate, and the ball found its way into the net via Tom Lapslie’s arse and a thundering failed clearance by a Chesterfield defender, sending the 142 (I think) away fans into hysterics.

Spoils shared, a point gained. Nothing sexy about that performance, but a sexy sexy way to end a game.

Shaun MacDonald 6 – I hear he got some stick on the telly for the first goal. I was a the opposite end of the pitch, but that seems harsh to me: if he didn’t come for the cross it would’ve been tapped in at the back post, but it was just a tad too far out for his outstretched hand to get any meaningful purchase on the parry. Didn’t do a lot wrong. Apparently, after the equaliser, he smuggled the ball under his shirt. If that’s true (and I’d love to see evidence if the cameras picked it up), Shaun goes straight in at number one shithouse of the year. Institutionalised.

Chiori Johnson 6 – A workmanlike performance at right wing back. Needs to watch his discipline – he could well have been sent off again – but was otherwise decent if unspectacular.

Joe Lewis 6 – We defended very well in the first half, and he was a massive part of that. The back three were less convincing in the second.

Keelan O’Connell 6 – Flashes of excellent attacking play but lacked the end product. Had a great chance to bring the game back to 2-1 but whacked it straight at the side netting. Worked really hard at left wing back too, clearly not a natural position for him. Reckon he’ll turn out to be a good signing.

Asa Hall 5 – For a great deal of the game, our midfield was utterly non-existent. Neither imposing themselves, nor supporting the front two, nor providing the defence with much protection. There are probably tactical reasons for that beyond the realms of my knowledge, but because I don’t know why I’ll have to give the midfielders a lower rating.

Gabby Rogers 5 – Ditto. Moments of nice feet, but it wasn’t his day.

Armani Little 6 – Ditto, but he did brilliantly for his goal.

Klaidi Lolos 6 – Looked the best of our forward-thinking players and was hard-done-by to be taken off.

Danny Wright 5 – Far from his best game, though he had very little service or support. Came alive in the last ten minutes and nearly got himself on the scoresheet twice. Still one of the best strikers in the league.

Dan Holman 6 – All the subs made a noticeable difference. Holman looked threatening and made Little’s goal nicely.

Alex Addai 6 – Looked extremely lively when he came on. His express pace and trickery caused all sorts of problems. If we can find room for him in this 5-3-2 system, and he’s fit, he has to start.

Do you agree with Matty’s ratings? Vote here

Man of the Match – Ben Wynter

To be honest, nobody had an especially good game yesterday, but Wynts just about edges it for his first-half performance. He made some superb last-ditch headers, clearances, and tackles, and seems to relish playing on the right of a back three.

Same 5-3-2 as last week. Little’s return from injury was well-timed, as he replaced the newly-injured Connor Lemonheigh-Evans in midfield. Not entirely sure where the goals will come from with this shape, but it did keep us solid and in the game for an hour or so. (Forgive me, this next bit is really boring). Very often, Chesterfield had an extra man on the opposite side of the pitch. Particularly in the first half, they’d switch the play and because our three midfielders were helping on the one side, the wing back was left stranded in a 2-on-1 on the other. Whether that can be solved by the players playing better, whether it needs a striker to drop in and help the midfield out, whether the formation just invites that and Gary is OK with it because it’s a long way from goal and elsewhere we’re unthreatened, I don’t know. You can wake up now. 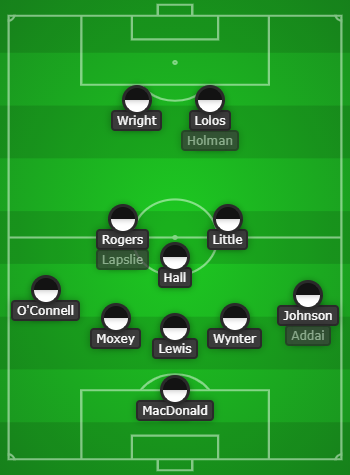 The referee, rightly, not giving that handball in the box in the 94th minute. You just know the penalty would’ve been so bad, the ball sailing over the bar, over the stand, and being pierced by the spire, and I’d be writing this report with significantly worse mental health. A corner was always the preferred outcome.

Chesterfield are a good side, and leaving there with a point has to be chalked up as a good result. They move the ball nicely and have quality all over the pitch (Fraser Kerr aside, whose performance won’t have left Gary regretting letting him go). Tshimanga is a top-class finisher at this level, and we gave him two chances to finish.

Spoke to one chap on the way out, whose main concern was that his team “can’t defend two-goal leads!” which seemed like a very niche complaint. I also overheard a fan saying (in a very broad Derbyshire accent, as you’d expect of a woman supporting a football team from Derbyshire) “Ah, just a year ago we woulda been chuffed with that result”, to which I could only smile and walk on. 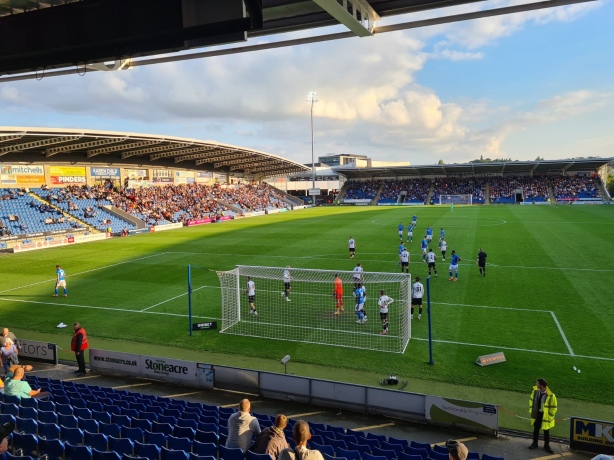 Only had small decisions to make, and made most of them well. James Rowe was wrong to suggest our first goal was offside, and the handball that I obviously profusely protested for was correctly not given.

This was minutes away from being a very different match report. Not doom and gloom, but general despondency about getting a deserved shoeing from a club who have improved their lot from last season while we…have not done that. The first half was hard work and we were made to earn our clean sheet, the second was poorer and more porous with both teams having decent chances but only one team taking them. But then we scored twice, and there are few better tonics than a last-minute, crucial goal away from home.

I take a weird sense of pride in this team, in the way that they’re quite regularly just a laugh. You really cannot write them off in either direction: they can’t promise you they’ll hold on to a four-goal lead any more than they can promise that a two-goal deficit is insurmountable. Yeah, they’re probably not quite as good as the team we had last year, but the same spirit and ruthlessness remains. We all know the man to thank for that. There’s a lot to work on if we’re going to be in the playoff conversation this season, and the sticking plaster of a late equaliser doesn’t heal that wound. It doesn’t half ease the pain, though.

Not our best performance but happy to get a point coming from 2-0 down, great character from the boys, happy with another goal 🤝@TUFC1899 https://t.co/KT7n5H6sWR

Dread it, run from it, Gary Time™ arrives all the same

If our goalkeeper (as reported on Chesterfield forums) has hid the ball up his top after our equaliser then he needs to be rewarded with a lifetime contract immediately and awarded permanent membership in the TUFC Shithousing Hall Of Fame. Outstanding commitment.