“At the end of the storm there’s a golden sky”…at last a win…a bloody win in the National League! Could beating Woking FC at Plainmoor ever feel so f##king sweet? I doubt it. You can talk tactics, formations, line-ups, goalkeeper rotation until the cows come home (and on the TT WhatsApp group we do!), but the main factor to grasp from Saturday was the superb attitude and battling performance from the Gulls. Where has this been?? Getting in the faces of the opposition, winning the ball, pushing harder than they’ve pushed for weeks and making our own luck (we were due some). What a blinding afternoon and one that Gary Johnson I’m sure has been begging for.

The team was more galvanised from the off, picking Mr 100% Ruairi Keating paid dividends as he would not give their defence a rest and Asa Hall reintegrating as midfield general was exactly what we needed. Nipping in with challenges, winning headers and bagging a second goal in two games, the skipper was immense I thought. Unlike the first one in that horrible Huish Park Boxing Day massacre, this one was important and deserved by a United team who had simply come to play.

Not to mention the ‘Return of the King’ Jamie Reid to action. With him upfront defences have so much more to think about. He can run in behind you or thump one in from 25 yards out – defenders just can’t handle him. The difference he makes is just massive and we can only hope that any incoming advances for Jamie are resisted. Ben Currie pointed out the serious body language from the striker at the end of the game, so we have our concerns at TT towers. We can but hope JR19 remains at United.

So Woking FC (h) was the first proper game for my eldest daughter Megan (a proud and somewhat spiky 5 years old last October) and initially I thought I had picked the worst possible fixture. Losing again was indeed possible (some would say likely) and so was a toxic atmosphere at Plainmoor as Ben Gerring scored from a set piece and the TUFC defence buckled once again. It all seemed written in stone, so thank goodness the football script-writers had something else in mind!

Megan has shown little interest in football apart from asking which colour I support and demanding that the TV be switched over to CBeebies immediately. But I wanted to bring her to Plainmoor and show what Daddy is all about, why he studies his phone frantically for scores and why he dashes off to Torquay every other week. Football is simply a big part of who I am and I suppose I’m hoping that some of this passion for the sport rubs off on her.

The results were mixed! An anxiety over Gilbert the Gull and a nervous apprehension over the noise in general made her initially uneasy…but with enough food packed (an apple was chumped on for around 15 minutes…call it a stress-apple if you will) and other family (plus friends) nearby she managed to last out the game, even if I was told off for jumping up too much! By the end I didn’t care and that Ruairi goal was the best moment of the season so far. Hugs and high fives all round – Megan bemused by it all but well-behaved and just about accepting of Daddy’s silliness! The second half was so great I almost joined in with that Ben Gerring song, before reining myself in. She’ll be back in the spring-time…maybe.

How brilliant was that atmosphere on Saturday? The Yellow Army found their voice and it’s been too long since the place was jumping. It’s a cliché but the noise of the crowd can make a difference, and I think having a team packed full of triers spurred us on. Nobody was dipping out of challenges and we responded to that enthusiasm. It goes both ways and a delighted Gary Johnson understands this like no other manager we’ve had.

The gaffer has had an awful time of it, and whilst no-one at TT seriously doubted his ability to turn it around – there had been far more questions than answers. January cannot come soon enough for GJ and hopefully it’ll give him a chance to rejig the squad accordingly. With Wynter also out injured now, full backs must be one of the priorities and for all the endeavour from Cundy/Niate/Cameron on Saturday I will be amazed if a new centre back doesn’t arrive in the coming weeks. Add to that a striker and you’re looking at a busy New Year on the horizon. Just DO NOT drop Ruairi – like a modern day Kevin Hill, his commitment to the cause just gives us extra and players like that are worth their weight in gold.

No time for a separate article this month, so here are the latest Player Ratings for the month of December (players only included if they’ve played 50% or more of the games):

2 – Ben Whitfield 6.8 – So industrious and never gives up, Ben is GJ’s best signing.

4 – Joe Lewis 5.9 – Never picked at CB for reasons unknown, Joe is a trier no doubt about that.

5 – Jean Niate 5.5 – Jean did well against Woking, but his capacity to play NL remains unclear.

6 – Shaun MacDonald 5.3 – Played great against Aldershot but all over the shop at Yeovil.

8 – Lloyd James 5.1 – Corking game V Aldershot but disastrous at Yeovil, the jury is out.

9 – Ben Wynter 4.8 – His worst month as a United player perhaps and now injured.

11 – Aaron Nemane 4.8 – Written off a bit unfairly by some, he was lively last weekend.

12 – Jake Andrews 4.7 – Needs a settled run in the team to kickstart his season.

13 – Kyle Cameron 4.6 – Central defence has been a shambles, needs a new partner.

Thank you for supporting TT this year and thank you to all the ace contributors who make this website doable! See you at Plainmoor on NYD. 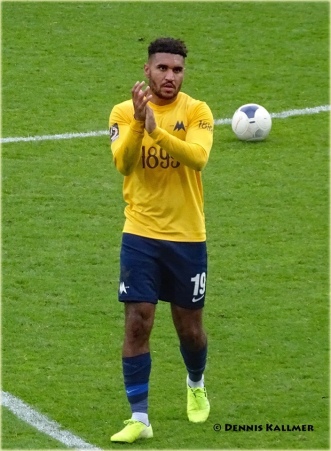