United left it very late to record back-to-back victories for only the second time this season with an unlikely and hard-fought win over AFC Fylde at Plainmoor. 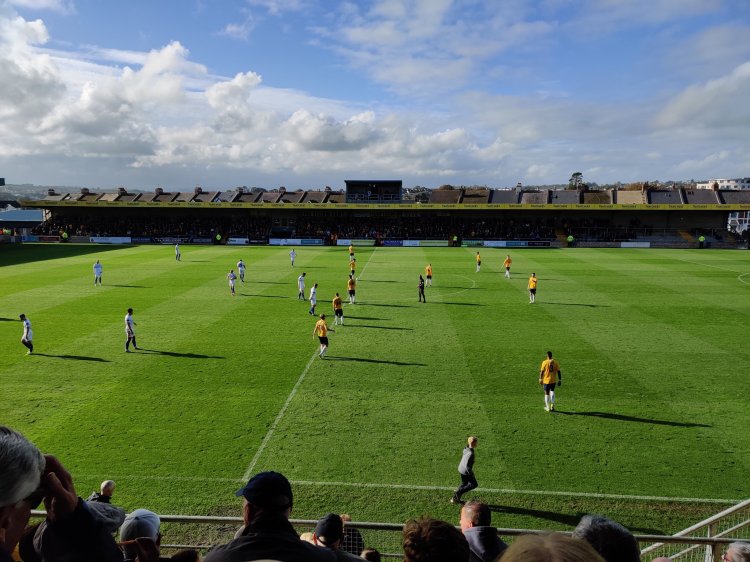 Torquay’s season has been plagued by inconsistency, not helped by a lengthy injury list, but with players now starting to come back The Gulls look well-placed to now kick on. Armani Little and Jean Niate were welcomed back into the squad, the starting XI unchanged from last weeks 4-0 romp at Stockport.

The Coasters were on the receiving end of a 4 goal hammering themselves on Tuesday, at home to Barnet. United fans know all to well to be ‘wary of the wounded beast’ and when Craigen got booked after only 30 seconds for a forceful challenge it was obvious that today would be a battle.

Kalvin Kalala, fleet of foot, picked up where he left off in Lancashire and started in confident mood, firing a warning shot early on by getting in behind his full-back and sending a dangerous cross into the box. Minutes later the mercurial Frenchman lit up a dull and drizzly Plainmoor with one of the goals of the season, of ANY season.

Cundy kept an attack alive with a flicked header that fell invitingly for Kalala who, on the full volley, rifled the ball into the top corner from the edge of the box. Dan Lavercombe, ex-Gull now Fylde keeper, did not stand a chance, you will not see a more perfectly executed volley, it looked beautiful and brought the entire ground to its feet. Va Va Voom.

That, sadly, was as good as it got for Torquay as an attacking threat in the first half, there was some neat interplay and some nice passing combinations but desperately little in the way of chances in and around the box.

Fylde, undeterred by the early blow, grew into the game and showed some flowing moves of their own but it was from set-pieces that they looked the most threatening. They nearly equalised just minutes after conceding following a mad scramble in the box after an inviting in-swinging corner- Robbie Cundy produced a brave bit of last-ditch defending to prod the ball away.

Minutes later, Whitmore headed against the post from another dangerous centre from the impressive Yeates. Torquay were slightly lucky to go in at the break one goal to the good; the teams separated only by Kalala’s moment of magic.

Fylde continued to pose problems at the start of the second half, Covolan twice had to be alert to thwart efforts from Rowe and the lively Craigen, there was a certain inevitably that the visitors would equalise but the manner of it when it eventually came was disappointing in the extreme.

A total lack of communication between Torquay’s Brazilian keeper and his covering defender, Liam Davis, turned what should have been an innocuous long-ball that had been over-hit into the easiest tap-in of Williams’ career. Covolan assumed Davis would leave it for him to sweep up, Davis assumed Covolan wanted the ball nodded back to him, neither got it right and Williams nipped it to accept the gift of an open goal. A shambles.

As has often been the case this season, Torquay’s heads dropped upon conceding and really struggled to string three or four passes together in an attacking manner, with far too many balls launched in the vague direction of the forlorn and increasingly frustrated Reid. It was a tough watch as Fylde tightened their grip on the match, the second half saw Torquay largely on the back foot, there looked like there was only going to be one winner.

As time ticked towards the 90 minute mark, and with fans heading to the exits, Torquay finally got the ball in behind the Fylde defence to force a corner. Although it came to nothing, it gave those remaining the belief that the match wasn’t quite finished as the 4th official raised his board to indicate 4 minutes added on. Was there to be a twist in the tale?

There was. Kalala, who kept trying to make things happen all match, retrieved a loose ball and sent a delicious, pacey cross into the box which was met emphatically by the head of Matt Buse, who directed his effort perfectly into the corner of the net to send The Yellow Army wild as all the players piled on in front of the Popside. Johnson, Downesy and all the subs enjoyed it too, ending up 5 yards onto the pitch in celebration, Plainmoor was rocking. Is there any better feeling than a completely undeserved last minute winner?

Covolan 6. Two smart saves at the start of the second half but woeful miscommunication for their equaliser. Kicking wayward.

Wynter 7. Solid and reliable, couple of beautiful diagonals, didn’t get forward as much as usual.

Cundy 7. Getting better every game, knows when to pass the ball out and when to be ‘no-nonsense’

Davis 6. Usually very solid and reliable, but a shambolic error for the equaliser from our most experienced player.

Kalala 7 (MOTM) made the difference.

Vincent 6. Our most technically gifted player but struggled physically today, passing was a bit astray.

Buse 7. Got stuck in and always showing for the ball, extra point for his thumping last minute header.

Whitfield 6. Quieter than we’ve already come to expect but never stops trying or working, just didn’t quite come off for him today.

Andrews 6. Another who never gives up and keeps going until the end, set-pieces weren’t too effective today when we really needed them to be on the rare instances we broke up the Fylde pressure, would like to see him centrally.

Reid 6. Starved of service and didn’t really get a sight on goal, as much his team-mate’s fault as his own. No worries, JR19 will be back and will finish league top scorer this season.

Little (on for Vincent) 6. Good to see Armani back, looked a bit rusty but got stuck straight into the battle. Sat quite deep, can we get him further forward?

It’s Kalvin’s world. We just live in it. #TUFC @kaalvinho 🚀

Man of the Match: Kalvin Kalala

If you’d asked me between 80-90 minutes (IE, when the sponsors must choose) I’d have gone for Cameron or Cundy for negating the threat of Rowe well and for being slightly less average than everyone else. However, Kalala has to win it for scoring a beauty and for setting up the winner with a scintillating cross. He ended up being the difference today and I’m off to the Open University to start a degree in French. Magnifique.

Same line-up as the one that dispatched Stockport so convincingly last week, why change a winning formula?. Tried to get Kalala on the ball as much as possible with varying degrees of success. Only one like-for-like substitution in the midfield so no change of formation, just simply trying to find a way to win.

Teams who lose 4-0 are either completely terrible or react positively in their next match with a point to prove, Fylde were the latter and when they had 2 players booked in the first 5 minutes I worried that they might be a niggly, physical team, intent on disrupting play as much as possible. Instead, Fylde played some nice football and dominated for long periods of the match. They deserved to equalise, even if the manner was through none of their own doing, and probably deserved to be heading back up to Lancashire with all 3 points. The last minute winner will be as agonising for them as it was jubilant for us.

I was impressed by Fylde today and their lowly position appears false and I would expect results to improve and for them to climb the table based on this performance.

I can accept incompetent performances from young referees; everyone has to learn their trade somewhere. Sam Allison is an experienced official and he seems to have a stinker every time he rocks up at Plainmoor. His match was punctuated by inconsistent decision-making, trying to allow the match to flow at some points and then fussily interrupting it at others. There was a period of 20 minutes in the second half where there was a head scratcher every other minute as he threatened to lose control completely, more and more free-kicks looked cheap and easily bought. This, coupled with his 2 linesmen appearing to guess the majority of their throw-in calls led to a very frustrating watch from the stands. Ire often turns to the officials when your team isn’t playing at all well.

It’s easy to want to write about Matt Buse after he’s just planted one right in the corner in the last minute, but his is an interesting rise to prominence from local non-league obscurity.

Despite impressing during an extended pre-season trial, I still had question marks as to whether he could make the step up to the full-time blood and thunder of the National League. He looks extremely comfortable at this level, excellent work-rate and keeps it simple, he may have got his chance through injuries to others but he has more than taken it and deserves to keep his place on merit as and when others return.

Before today I wondered whether our central midfielders could score goals, I know he had a decent record at Taunton, and today he showed that he can. His run was perfectly timed and his header was expertly directed, Lavercombe didn’t move for it. What a moment for Matt Buse and I’m sure he will only get better. Looks like a very popular guy in and around the team too. Just goes to show that hard work pays off.

These 3 points were every bit as fortuitous as they were welcome. We were second best for much of the match but still found a way to win. The last-gasp winner sent the punters home happy and masked what was a disjointed and frustrating performance in the main with goal-threat at a minimum. Today showed the importance (for me) in leaving Kalala on the pitch for as long as possible, because despite his periods of in-effectivity, he is capable of moments of inspiration such as his perfect delivery for the winner.

The manner in which we conceded was disastrous. We have seen that all too often, and whilst similar mistakes mattered little last season, we simply cannot allow opposing teams these sort of freebies. It has nothing to do with technical ability, these errors are down to concentration and communication. We must do better, there can be no excuses.

It has been an increasingly stop-start season so far, not helped by the misfortune (and number) of injuries, and yet we are still well-placed to ensconce ourselves in the play-off and promotion picture; we have a good squad. With players now starting to return, a run of wins will see us rise further up the table. With 2 more away matches to come before the week is out, and with the bizarre scheduling of the National League showing no signs of slowing down, today was a crucial win in order to keep the momentum building. The best teams often win matches that they don’t play very well in; we certainly did that today. Tres, tres bien.

Massive win today! Boys dug deep, buzzing too be back on the pitch 😅⚽️

Very sad to learn of Pete Wiley’s passing today. One of the best voices I’ve heard in football. A top bloke.