A Bristol City U-23 squad are sent down to Plainmoor and teach us a footballing lesson for much of the game, eventually triumphing 3-1 in an open (and reasonably entertaining) 90 mins that could easily have been 6-3. 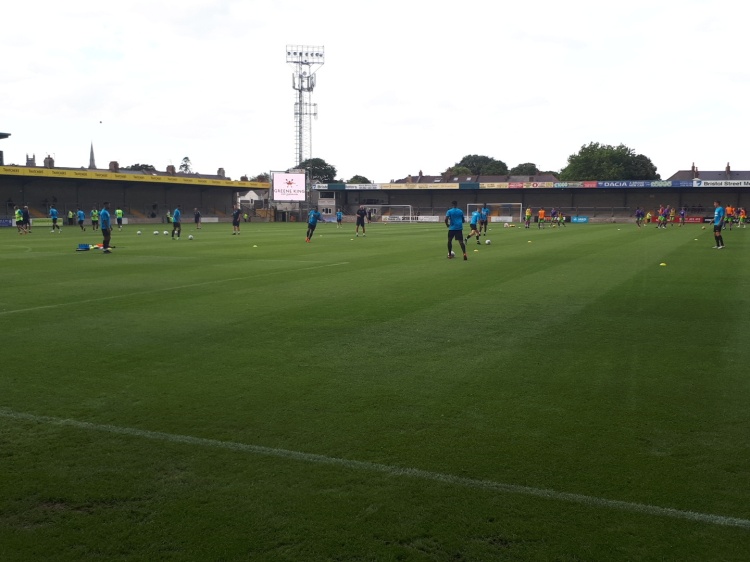 TUFC start with a 4-4-2 which is a shambles for most of the 1st half, as City exploit holes in our defence and midfield, making chance after chance but only taking two of them. The 1st one being an absolutely belting free kick from Jake Andrews.

Owers switches to his preferred 3-5-2 at half time and United appear much more comfortable as the cavalry of Davis, Williams and Essuman arrive – the 2nd half XI also appears to be his favoured XI for the season start, but we shall see. Meanwhile the Bristol City kids play lovely stuff, show super movement off the ball and I’d happily take any of them on loan straight away!

Shaun MacDonald does well in goal when called upon and makes some smart saves to deny City – however he’s not a big physical presence and unlikely to usurp the injured Alex Bass for the number 1 jersey. Bobson Bawling has a nightmare at right-back, the guy is clearly not happy there and gets caught out of position on numerous occasions. At centre back there are wobbles all night long. Josh Gowling is either unfit or just not interested (maybe both). Young cbs Kyle Cameron and George Essuman have their good moments, but also struggle especially when City press them and look like they need an experienced head around. Liam Davis comes on and looks the part as usual, he’ll definitely be one of the best defenders in the NLS.

Asa Hall and Samir Nabi have very disappointing games in midfield. Samir is anonymous and barely touches the ball in the first half especially. We can only hope he’ll shine against lesser opposition. Asa drops back to pick up the ball, but gives it away on a number of occasions and lacks sharpness (and fitness). Ryan Dickson also fails to make much of an impression, and between the three of them I would question whose going to win the ball back! On the wing James Roberts tries to provide much needed width, but struggles to get in the game as City’s youngsters impose their will – I’d be surprised if he gets a contract going by that showing.

In the 1st half Ruairi Keating is one the few who shows full commitment, and is often surrounded by City players as he gains possession. Brett Williams arrives and within a few minutes bangs one in the left hand corner from a tight angle – after that there’s some quality touches, some missed opportunities and some lethargy, typical Brett then really! JP Pittman looks fit, makes some promising runs but doesn’t look like scoring and Jamie Reid replicates that in the 2nd half as the game gets stretched. The search for a new striker should still continue, we certainly need one; someone who can hold up the ball, link up play and is a threat on crosses – they would be worth their weight in gold.