Today was the day we’d all been waiting for. The final day of the season. The end of all our suffering was finally here as the last game of a truly torrid season reared its ugly head. Yellows Twitter was typically glum, with predictions of our boys being spanked four or five nil being thrown around as playoff chasing Ebbsfleet actually had something to play for. Whereas we were down and out for the count, with Gravy Gary still somehow at the helm. In fact, the game turned out to be surprisingly entertaining as both sides threw a bit of caution to the wind and battled out a good 1-1 draw. 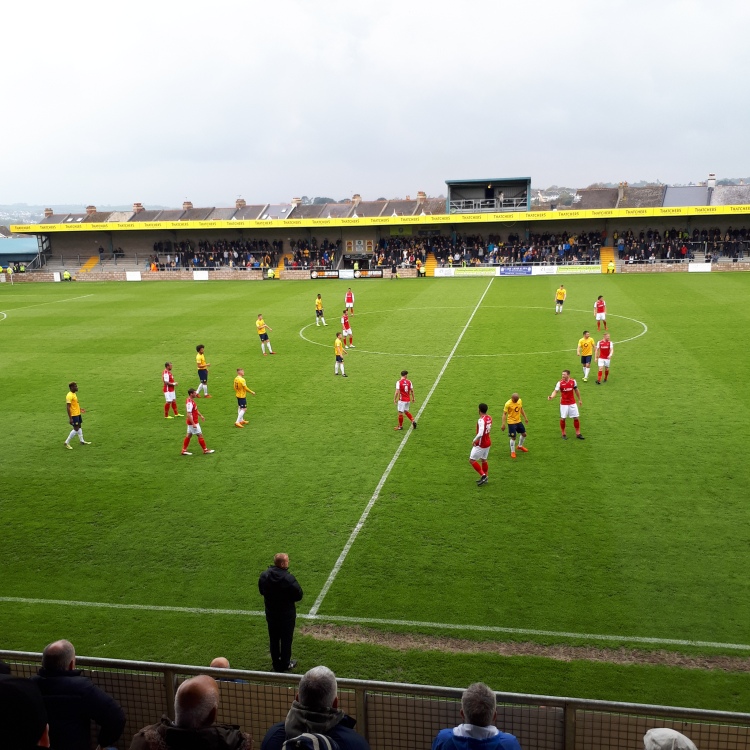 The first half started with Ebbsfleet setting the agenda. Right from the word go they were pushing men forward, trying to catch us out. However the Gulls held their nerve and started to create some chances of their own. The greatest name in football, Connor Lemonheigh-Evans, found Fleet keeper Ashmore with a tame shot from distance and Healey should’ve done better when in on goal. Ebbsfleet then created a couple of half decent chances with both Whitely and Kedwell going close, before the Gulls gained the upper hand and managed to force some corners and apply some pressure. But nothing came of it and the half petered out. It wasn’t helped by some truly awful refereeing by Brammall, who missed a blatant elbow on Brett and an obvious pull back on Healey when chasing a very gettable ball over the top.

The second half started in the same vain, with both sides struggling to get the upper hand, but somehow creating chances. A moment of handbags after 57 minutes was the only excitement in the opening 15 as Winfield wrestled Romain to the ground while the striker was charging. The Ebbsfleet player obviously wanted a cuddle because they stayed on the ground for a little while as players from both sides joined in. It resulted in both players being booked. Then in the 69th minute (nice) the breakthrough finally happened. Replacement fullback Connors saw his cross from the left loop over everyone and plant itself in the far corner of the Torquay goal via the post. Ebbsfleets bench went bonkers as a huge slice a luck went their way.

Torquay responded brilliantly from the kick off and only two minutes later won themselves a penalty. Williams was flattened by a terrible challenge and Healey stepped up to despatch it nicely. After missing the last two, it was nice to finally score from 12 yards. The game then had a few chances for both sides, but nothing major, as it petered out to a dull conclusion. In the end it was probably a fair result, and a fairly forgettable way to end a season we all want to forget.

Connor Lemonheigh-Evans was very impressive again today. He’s skilful, has a good turn of pace and can be surprisingly disruptive for such a small player. He’s developed a very good understanding with Young in the middle of the park as his driving runs really helped turn defence into attack. He’s definitely the player we all though Dowling would be.

Luke Young once again looked head and shoulders above everyone else on the pitch today. His passing was good and his work ethic great as he did all he could to end this season on a high. He is a player that does not deserve to be stuck in this situation and should be playing in the League next season. We’ve offered him a new contract, but I doubt he will stay. Thanks for the service and loyalty Luke.

Who would’ve known what would have happened if Rhys Healey had joined us earlier. The Cardiff loanee was a real handful today with his movement and he took his penalty with a coolness we haven’t seen enough of. Finishes the season as our top scorer with six, and should be playing in a much higher division next year.

I also want to give a shout out to Vincent Dorel, who came over for a chat at the Player Sponsors event. He’s a top goalkeeper, and a top gent. I’m glad we’ve offered you a new contract, and I hope to see you again next season.

Another game, another exhibition of Owers ball. The only change for the match was in the back three as Efete came in for Balatoni. This made our defence instantly more solid as he can actually move. The usual five at the back, two in midfield and a long ball towards the front three was the order of the day as we tried to push the away side back. With nothing to play for, the team threw caution to the wind and really went for it today. We peppered the goal with shots and played some good stuff when we kept the ball on the ground. But we couldn’t finish, and only scored because of a penalty. Story of the season (apart from scoring the penalty).

Ebbsfleet were playing like a team pushing for the play-offs, right from the first whistle they were going for it. Daryl McMahon has built an incredibly physical team and they often towered over our boys, which really nullified the effect of Owers ball. Even their keeper, Nathan Ashmore, looked more like a prop forward than a professional footballer. Veteran striker Danny Kedwell was a real handful, but often had to drop deep meaning that his usually wrecking ball effect was nullified. Midfielder Andy Drury was a great presence in the middle of park, working well in tandem with fellow midfielder Luke Coulson to create a platform for Ebbsfleet to build from. However, at times it felt like they were trying too hard as they pushed men forward, and did nothing with the ball. A better team would’ve punished them.

Thomas Brammall was awful today, one of the worst refereeing performances I’ve seen this season at Plainmoor. He made four really bad calls today, two of them could’ve resulted in a straight reds for the away side. Namely, Ebbsfleet defender Rance led with an elbow on Brett while one of The Fleet defenders went studs up on Barnes and we didn’t even get a foul. The only call he got right was the penalty, thankfully.

Really struggling to think of a key moment this week, the game always felt destined for a draw, right from the first whistle. But just because I have to, I’m going to say Healey’s equaliser. Brett was floored by a nasty challenge by defender Kenny Clark, which should’ve been a booking, and Healey sent the keeper the wrong way. As he celebrated, he told the away bench to calm down and stay quiet. A classy touch, right from the Warnock manual. The way we responded to going behind was outstanding as we didn’t feel sorry for ourselves, but picked ourselves up and kept going. I don’t want to keep saying this, but if only…

If I was Owers, the first person out the door (after myself) would’ve been Brett Williams. This time last year he was playing the football of his life, single handedly keeping us in the National League. However, we’re seeing none of that Brett swagger this season, he looks off the pace, lazier than normal and like he wants to be anywhere else. I’m genuinely surprised he’s been offered a new contract, there must be other players who at least look like they actually want to play for us.

This time last year over 4,000 people watched Myles Anderson and Aman Verma secure our status as a National League team for another season. Fast forward a year and just 1,700 fans watched the curtain come down on what can only be described as a cluster f**k of a season. In a very even and lively game, we more than matched play-off chasing Ebbsfleet, and were the side definitely more likely to win. I’m not convinced they would’ve scored if it wasn’t for a flukey cross that deceived Dorel.

Now the season is over, serious questions have to be asked. How does Owers still have a job? Who would be the alternative? How many players really want to stay with us? What does Clarke Osborne really want to do with the club? Why does McGinty always wear a mouth guard? All serious question, that need serious answers. I am really glad the seasons over, there have been a couple of high points, and so so many low points.

There’s no debate that this is the lowest point in Torquay United’s history. We are standing on a gangplank over oblivion with our owner prodding us in the back with a cutlass. But this is not the time to give up on the team.

Clarke Osborne wants this club to fail, it’s so obvious. We all know he wants the freehold so he can sell the stadium and build flats, or an IKEA, or a race course and fulfill his wet dream of a new stadium. But we can’t let him.

Torquay United are our team, our club, our community. They’ve been around longer than Osborne has been alive, and will continue to exist as long as there are enough people to support them. He wants people to stop going, he wants people to forget about the team, he wants us to fade into the distance and become a long forgotten memory. We can’t let him win.

No matter who plays for us, or who manages us next season we need to get behind the boys. We need to show GI that people still care about the club and we won’t go down without a fight. The support has been great this season, home and away, and often a lot more than the team deserve. Long may it continue into next season.

I love this club, I really do. I’ve spent way too much time, money and tears following them for the last 15 years and I’ll be damned if I let us die in a ditch because some developer with a hard on for asset stripping wants to raze us to the ground. I know I’m not the only one that feels this way, just look at the brilliant banners that have been displayed at the last two games by hard-core members of the popside. Stick together, support the boys, join TUST and together we can start to take our club back.

Thanks for reading, and see you next season.