Hi James – thanks for talking to TorquayTalk, we just wanted to get some views on our opposition before Saturday’s massive 90 minutes (well they’re massive for us anyway!)

Let’s talk about your season so far, how’s it been for you and what’s been the highlights?

It’s been a great season thus far and I’ve enjoyed visiting some great old grounds including Plainmoor and Prenton Park and going to away games north of the Watford Gap unless it’s midweek(!!).

What were your expectations for the campaign after promotion from the National League South?

I didn’t really have any expectations as far as the season’s concerned, more so hopes. So long as we survive to play at least a second season in the National League, I’ll be more than happy.

Who are the key players that we should be looking out for on Saturday?

All the squad have performed out of their skin this season, but special mentions go out to Harry Pritchard who’s been banging in the goals and Sam Barratt, who was in the recent England C side that played Slovakia. The defence have been awesome too.

Alan Devonshire, in charge at Maidenhead for a second spell, is doing a great job, and has a great team of coaches behind him. I’ll keep his tactics under my (Dev) cap for now, I’m sure Gary Owers has done his homework.

Yes I’m sure he has Jamie….

You lost 4-0 at Plainmoor earlier in the season after the team arrived late, any predictions for Saturday’s game?

Losing 4-0 at Plainmoor was a real downer. I remember chatting in the bar at Plainmoor to some of the Torquay fans pre-match and they didn’t have much hope for The Gulls. The pit stop on the M4 certainly didn’t help us. I don’t like to predict results as usually the complete opposite happens, perhaps I should go for a Torquay win?!? Hmmm….

York Road is a good old traditional ground. Built in 1871,  it’s the oldest continually used football ground in the world to be used by one team. It has a capacity of 4,000 (500 seated) and is ideally situated adjacent to Maidenhead railway station for any travelling fans not coming by road. 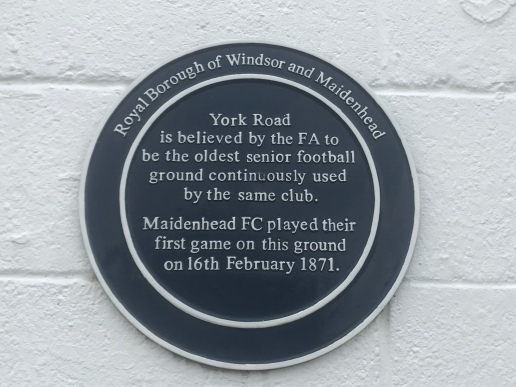 Are you satisfied with your current owners?

We’ve got a great Chairman in Peter Griffin, who backs Dev all the way.

We desperately need 3 points as we struggle to avoid relegation, what are your views on our current situation, if any?

I have a bit of a soft spot for Torquay, as I used to work with a Torquay fan here in Maidenhead. I really do hope you survive along with ourselves, mainly so we can have another go at you at Plainmoor, when hopefully the coach driver can get the team there on time.

And finally a big question to finish – the Yellow Army will be there in force, any suggestions of pubs for our fans to enjoy this Saturday?!

The Yellow Army will be more than welcome in almost all the pubs in town. Across the road from the railway station is The Bell which is your best bet should we be segregated as it’s right on the road for the turnstiles. If you’re into your Wetherspoons, it’s The Bear for you and it’s about a 5 min walk from the ground. At the top of the High Street is Off The Tap, a recently refurbished pub which does a great line in Pizzas if you’re looking for a bite to eat.

Thanks for talking to TorquayTalk Jamie, all the best for the rest of the season.