A very frustrating performance from the boys in yellow this evening, despite snatching a point at the death. The first half was mostly Torquay, yet again having a lot of the ball but not making it count. Alex Davey hitting the bar from a corner and a Luke Young free kick were the closest United came to getting a first half goal, but it was Gateshead who went into the break better off. A miss-communication at the back saw Jordan Preston profit and pole the ball home. The second half was much the same story, a lot of possession but no real penetration. Guy Gnabouyou was lively when he came on, and so nearly scored the winner but for a brilliant save. United rescued a point through captain Sean McGinty from a Luke Young corner. Despite the late excitement, a missed opportunity. 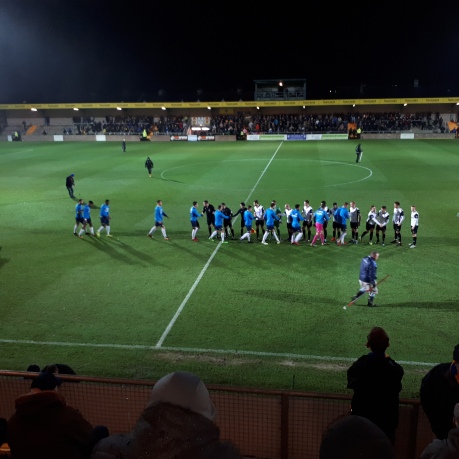 Man of the Match – Luke Young:

Luke Young was the best player on the pitch this evening. He constantly had the ball in the middle and beat players, played a clever pass, and controlled the game. I seriously doubt he will be a Torquay player come the end of January.

Sean McGinty was good tonight. I’ve always liked McGinty, and I think having the armband has matured him as a player – I think you can draw a similarity to when Angus MacDonald was given the armband. The defence is the one thing I will admit Owers has improved and I am pleased the team is performing well without Gowling.

Slightly different approach to the tactics area – we’ve all spoken about the formation. I want to talk about Luke Young’s corners. Now I think Luke is our best player, but corners are an issue for me. Now I know we’ve scored from one today, but we have had a lot of corners wasted. What I don’t get, is why has Gary Owers is getting corners floated in, rather than whipped in. With a floater cross its harder to generate the power, whereas with a whipped cross the power is already there.

Gateshead were underwhelming, they didn’t have anything that gave the impression they will struggle or be up there. I think they’ll coast the season and finish mid-table. An underperforming club in my opinion.

In stoppage time, after McGinty equalising, Jennison M-W puts a hard ball into the box, Guy Gnabouyou connects first time and it’s brilliantly saved by the Gateshead ‘keeper. That save made the difference between taking all three points or dropping two points.

The ref was poor this evening. I thought he gave a lot towards Gateshead. I didn’t get the best view but the decision to book JM-W for diving seemed an odd one for me.

I’m bored of constantly criticising Josh, but it’s getting ridiculous. Constantly slowing play, missing chances, and missplacing passes. But the thing I really can’t stand is the strolling around with his head down. There was a moment this evening I think Davis was breaking away from the box and had McQuoid in space, but McQuoid’s head is down and he’s oblivious. Enough is enough, send him back.

Despite the late goal and excitement, this is two points dropped. Having the amount of pressure that we did merited more in the game, but once again it’s a case of missed opportunities.

“A very similar game to many we’ve seen over the years! A bright start, no goal and then a sucker punch at the other end. After that it got pretty grim in the second half and I for one couldn’t see us scoring. So it was a nice surprise when McGinty’s header just about stayed in! A draw doesn’t feel like enough though, especially as Gateshead were so sluggish in the first 20. The lack of a leader upfront really tells in weather conditions like that, when you need a big physical body to hold the ball up – Keating and Reidy were not up to the task. I agree with Sam’s man of the match – Luke played with confidence and always tried to get us moving forward”. Dom – @DomRoman