Football, eh. Very few things could drag upwards of a hundred people from Torquay to Cleethorpes of an afternoon. I’m sure many of the fans in the away end today had come from closer than Devon, but that matters little, and those who did travel the full distance deserve the upmost respect and an immediate mental health appointment.

I suppose, before we get into what everyone is thinking about – the death of the season, contract renewals, how my day was – I should probably begin by talking about this football match. It’s impossible, though, to talk about it in isolation, because it was a pretty decent microcosm of the campaign as a whole.

We came absolutely flying out of the blocks, and deservedly took the lead through an Asa Hall thunderbolt. The host’s sucker punch before the break should have been nothing more than a wake-up call for the rampant Yellows, but instead it was a warning sign of disappointment yet to come. We looked tired, very tired, by the end of the match. We’ve only really got eleven good, fit (even that is debatable) footballers, and they all started today. So for most of the second period those footballers, some of whom have played forty games this season, were blowing out of their proverbials.

As injury time loomed, and Grimsby fans began to filter out, Armani Little – one of the season’s shining lights – was guilty of a tired touch in the box. His second touch was far more deadly: it was a tackle. A desperate, mistimed tackle. The tackle seemed to be a cry for help; it begged “any danger of having literally anyone worthy of wearing the shirt on the bench who could do literally any heavy lifting at all at any point this season?” With the award of the penalty, at least two men in cyan fell to their knees.

They knew that was it.

She’s been clearing her throat since about November. Sitting there, bulbous, bulging out of her ill-fitting black dress, waiting to burst into song, munching on a pork pie for starters. I personally texted her on Monday and managed, with a lot of sweet talk, to convince her to hold off after the Eastleigh draw. She thought that was her time, but I assured her a win at Grimsby would let a slither of light back in. She agreed, just. But now she’s off. Those chimes in the distance are the frightful tones of the fat lady. She’s singing Goodbye Horse, she’s singing it loud, she’s singing it clear.

I imagine the Discourse in the Yellows Media-sphere for at least the next two months will be occupied with diagnosis of what went wrong this year (awful start; bad recruitment in challenging circumstances) and what we need to do in the summer. I’ll probably bore myself with my own opinions by late May, so I’ll not give too much detail now.

But now the death knell has tolled and the nails are in the coffin and the ton of straw has broken the camel’s back, it is time to properly focus on next season. As far as I can see, our out of contract players fall into approximately four categories:

Moxey (definitely worth another season)

There are a couple of borderline calls, there, and almost certainly some players I’ve forgotten about, but that’ll do you for now.

For reasons that I can’t be arsed to Google, The Mariners play their home games in Cleethorpes: a town ten minutes train ride from Grimsby, and that almost shares a name with a talismanic former Gull. Before the game, I started to fall a bit in love with it. It’s a proper working class, chippies everywhere you look, donkeys on the beach, 2p machine, extremely friendly people, not a decent boozer in sight but three mini-golf courses in about as many steps, genuinely dangerous looking Ferris wheel, rusty slide, pathetic excuse of a rollercoaster, people walking round town dressed as St George with a dragon on the end of a foam spear, open top bus, assault by a wall of wind (and sand) as soon as you get off the train, reasonably picturesque, smells a bit of seaweed and a bit of piss and a bit of doughnuts and a bit of serial chronic underfunding, absolutely sod all to do on a Saturday except go to the football, seaside town. It was not too dissimilar to Paignton or Barry or Blackpool and was thus right up my street, in its own mad way.

After the game, I hated Cleethorpes. It was cold, the lack of boozers became a serious problem, the million chippies had all closed (seriously. I earmarked four chippies on the seafront for a post-match chip butty and they were all closed at HALF PAST FIVE ON A SATURDAY (WHEN ARE THEY GOING TO SELL CHIPS IF NOT AT HALF PAST FIVE ON A SATURDAY?) You could get enough ice creams – which by the way would clearly just blow into the sea – to sink a ship but getting even a whiff of a chip became a serious mission), the chippies in town that were open didn’t do chip butties, and the seagulls were circling like Football League clubs around a goal-scoring midfielder. It’s amazing the difference a defeat makes to your outlook, eh?

(I’m talking to myself as much as anyone else)

Come on, now. We were clearly never going to win the playoffs. You daft daft fool.

The cynic in me says it’s better to have that hope stamped all over now, than to go to Southend needing a win and ballsing it up. This is probably just God’s way of telling us to focus on the cricket season, as is correct. That said, it’s fun to have hope, isn’t it? And it is a shame that this weird, sometimes fun sometimes awful sometimes losing at Havant sometimes beating Stockport and Wrexham and Notts County season has come to an underwhelming end.

See you at Oldham! 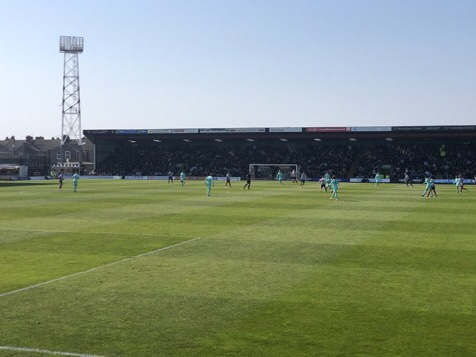 “I have just been talking to the lads about decisions that they make – even in life. You have to make more right decisions that you do wrong. I thought in the second half we made a few wrong decisions and it cost us. In a big game like that it can cost you dearly” – GARY JOHNSON

THE GULLS WEEK 25th APR – 1st MAY by Danny Burnell

2 thoughts on “TALKING POINTS – Grimsby Town (a) by Matty Hayward”