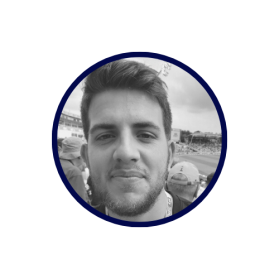 What do you write in a match report about a game where not much happened?

Armani Little’s lethal first half finish was enough overcome a toothless Woking whose ten-minute tirade at the end felt about as dangerous as woolly jumper.

The Yellows started strongly and produced a brace of half-chances for Stephen Duke-Mckenna (one saved; one wide) while Shaun MacDonald kept the back door closed with some proactive ‘keeping on the edge of his area.

Then we struck. Ben Wynter, on return to the Ben Wynter International Stadium, slipped a through ball into Armani Little. It looked for all the world like he would, probably should, square it to the Lemon for a tap-in. Perhaps even the goalkeeper was expecting this, because he stood flummoxed and helpless as Armani’s arrow flew into the roof of the net. Whether the ex-Woking man was offside or not is now entirely academic (he was, considerably, I thought), the strong-in-number Yellows faithful erupted into a glasses-breaking, push-and-shoving delirium.

The rest of the game was characterised by a distinct lack of quality. Woking had their spells at the end of each half, and can probably feel a bit hard-done-by to leave empty handed. Nicke Kabamba did hit the bar with a header, but it was loopy and never really looked like going in.

Bums were squeaking in the away side-terrace and seated section when the Cards kept pushing through the seven minutes of added time: MacDonald and Wynter were celebrated for a defiant save and goal-line clearance respectively. United didn’t fold, though, and clinched another crucial three points in the surely doomed but nonetheless fun push for the play-offs.

Shaun MacDonald 7 – Did spill one, but then regained it, and generally looked pretty solid. Another clean sheet for him. What a difference he’s made.

Ben Wynter 8 – I simply love him. Another stoic defensive performance, tallied with a beautifully crafted pass for the goal. He loves playing those Cards.

Stephen Duke-Mckenna 7 – Utilised in a wing-back role today, and performed well. Looked dangerous going forward and unthreatened on the back foot.

Asa Hall 7 – My Lord. Must’ve been shattered playing 90 minutes after barely making an appearance for weeks, but he stood firm.

Chiori Johnson 7 – What a good lad. Played The Lapslie Role at the base of midfield. Worked hard, threw himself about, gave the ball to people with more ability than him. A good performance.

Dan Martin 7 – Honestly barely noticed him, which is probably a good thing for a left wing back.

Connor Lemonheigh-Evans 7 – Threatened to score a couple of goals very similar to his hat-trick-clincher at Plainmoor, and really should have put the game to bed in a dying-seconds-counter-attack. No dice today, but a solid performance all the same.

Danny Wright 8 – The linchpin of the side. He’s so crucial to how we play, and showed that again yesterday.

Opi Edwards 6 – Didn’t really do much, but his fresh legs provided some value.

Keelan O’Connell – Came on too late to give a rating, but did his job well.

Man of the match – Armani Little

By quite some margin. He really is a classy player. The finish came from a place of confidence we’ve not seen in him before. He also exhibited some real maturity in his decision-making, winning of cheap fouls, and general time-wasting come the end. If anything’s to happen this season, we’ve him to thank for lots of it. He left cos they’re shit.

Have to make room to say that the Torquay fans were, once again, excellent. It’s difficult to make noise on a long terrace without a roof, and there were spells of quiet when the boys in cyan were slightly under the pump, but the number of people who continue to turn out for this silly little football club up and down the country is something we, and those people, should be proud of. Either that, or there needs to be a widespread investigation into the mental health of Torbay’s population, because there really must be a better way to spend a bank holiday.

Also a nod to the weather, which was unexpectedly (if you ignore forecasts) ace.

Stephen Wearne went off injured on Saturday, and that clearly kept him out of contention for yesterday. Tom Lapslie was also absent from the squad, though he was walking around on the pitch after the game, so we can deduce that he is neither dead or suffering from a broken leg. Those two were replaced by Asa Hall and Dan Martin. In a slight reshuffle from Saturday’s shellacking of Notts County, Chiori Johnson moved into the middle of the park and Duke-Mckenna operated in the right wing-back role. The rest was as we’ve come to expect, as illustrated by this beautiful diagram. 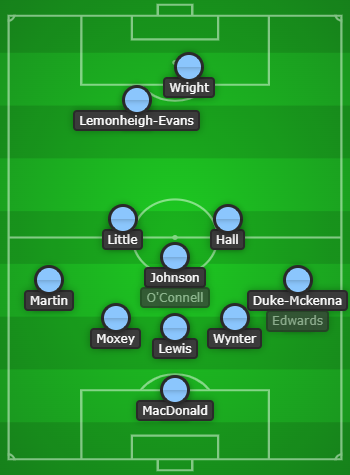 Woking are as Woking should be. Very very mid-table Conference. I know they’ve been out of this league a bit, but they are to me the archetypal, perfect, classic mid-table Conference club. They will win three or four games a season you don’t expect them to win. They will also lose to a dreadful club or two. They’ll sometimes have a good run in a cup. They’re not going up. They’ll flirt with but generally avoid going down. They’re just there, and I’m glad they are, because if we are to stay in this hellhole of a division for another season, it’s a nice place to go and win.

Lots of soft fouls given both ways, many very similar-looking challenges overlooked. What the referee lacked in consistency, his assistant made up for in ignoring offsides. I may be proved wrong on this – I’ve not seen the highlights – but I think we probably got away with that one.

If we had even two points fewer than what we do, that game would have been extremely boring and pointless and, to be honest, I might have done something else with my day. But that’s the thing about football, particularly this daft old club. They keep you hooked, keep you coming back. We were pretty ordinary yesterday. As a spectacle, the game was reasonably dull. But that literally does not matter one jot. We went there for three points; we got three points; even though they’ll probably all be meaningnless as we inevitably finish 10th, there’s a small lingering feeling – a green shoot of possibility – that maybe those three points could be the difference between the life and death of our promotion chances.

Hope is a good thing, maybe the best of things. And no good thing ever dies.

Woking (a) in the sunshine! ☀️💛💙 #tufc pic.twitter.com/TeQXjDcRrk

Christ, that is one card happy referee. https://t.co/mNL0vtuAAs