Chris looks back at the key points from Saturday’s win

Now this is a phrase that fundamentally annoys me, but it was very relevant to the Yellows yesterday. Due to the latest injury to Danny Wright, and the absence of any #incomings, Gary took the decision to not select a recognised striker. We have tried this before and let’s just say that it didn’t work. But against Wrexham, it was all part of the GJ masterplan. Stephen Wearne was the chosen not number nine and it worked perfectly. The key to it working well is to have a mobile, hard working forward that can close the space and is skilful. Wearne did all of these things really well. He was a nuisance to the defence and never stopped annoying and harassing them. This therefore meant the system worked.

I always think that some managers make too much of systems and formations. Football games are generally won by whoever plays better on the day. But every now and again, you watch a game where the formations and system wins the game. And yesterday was one of those. Gary did Parkinson all ends up. I shouldn’t imagine that analysing Wrexham’s style of play was too hard, bring as it was mainly wang it from the bloke with a mega throw, or lump it forward and try and win the physical duel. By playing Asa at the centre of a three, and Wearne as a false nine, the game plan worked brilliantly. The forward players and wing back pushed and pressured high up the pitch whenever they tried to play from the back. This condensed the space and gave them nowhere to go. We also attacked noticeably slower than usual, particularly in the first half. This led to us using the ball, and not trying to put crosses in that nobody would win. The back three were all outstanding and won every individual duel with some SERIOUSLY big blokes.

Some fans that I have spoken to and read have been worried that Asa may be reaching the end of his career this season. There have been some games on heavy pitches where his legs have struggled and he has faded from games and looked his age at times. But the role yesterday was spot on. The way he played reminded me of how Steve Woods (what a legend) played towards the end of his career. Asa reads the game so well and is able to anticipate a problem before it happens. In midfield, his legs sometimes don’t let him get there, but you see the game so much more from centre back and he judged everything very well. He was strong in the air and alongside Lewis and Moxey, the three of them never stopped communicating throughout.

The Importance of a Goalkeeper

The goalkeeper is perhaps the most important component of any football team. Any mistake is magnified and usually costly, and the confidence of the whole team can be undermined by a poor goalkeeper. In truth, I think we saw this at the start of the season, and how a quiet keeper doesn’t help and can lead to indeterminate and poor decisions from defenders. I wasn’t personally hugely concerned at Shaun MacDonald moving on, as I felt that we could do better. But the proof is always in the replacement. Once that didn’t work, credit to Gary for giving Mac what he needed to return to the club. It may be too simplistic to say that was purely assurances that he would be number one, but he made the comment when he signed again. Yesterday, he was outstanding again without making many saves. He talks, communicates, barks, guides and cajoles from the back and is always sharp off his line. He was brilliant of his line and was decisive, always showing strong handling too. He also time wasted very efficiently.

Whilst saying all of the above about the false 9 and the system, it won’t work every week. We have been far too reliant on Danny Wright all season, and as much as I love him, his fitness cannot be relied on. The team selection also shows what GJ thinks about Holman and Lolos that he would rather play with no forward than select them. So that situation is not sustainable moving forwards. We have to add a forward that gives a physical option, and can score goals. I am sure that isn’t as easy as it sounds, but we are two quality players from being able to have a real go in the remaining eighteen games this season.

We couldn’t make it, could we?

The general consensus of late has seen us being finished and mid-table mediocrity one week after a defeat and we are all going for it the next after a good result. And I think that this squad as it is has too many holes in it. But we have had some seriously impressive results this season. Wins at home to Stockport and Wrexham is not something that many teams will have on their CV. Neither are draws at Notts County, Chesterfield and Wrexham. But with some luck with injuries and two really good quality and timely additions, we can be in with a shout of a go at the playoffs. We have some winnable games ahead, and fitness will be key. Buy hey, why not in this league? 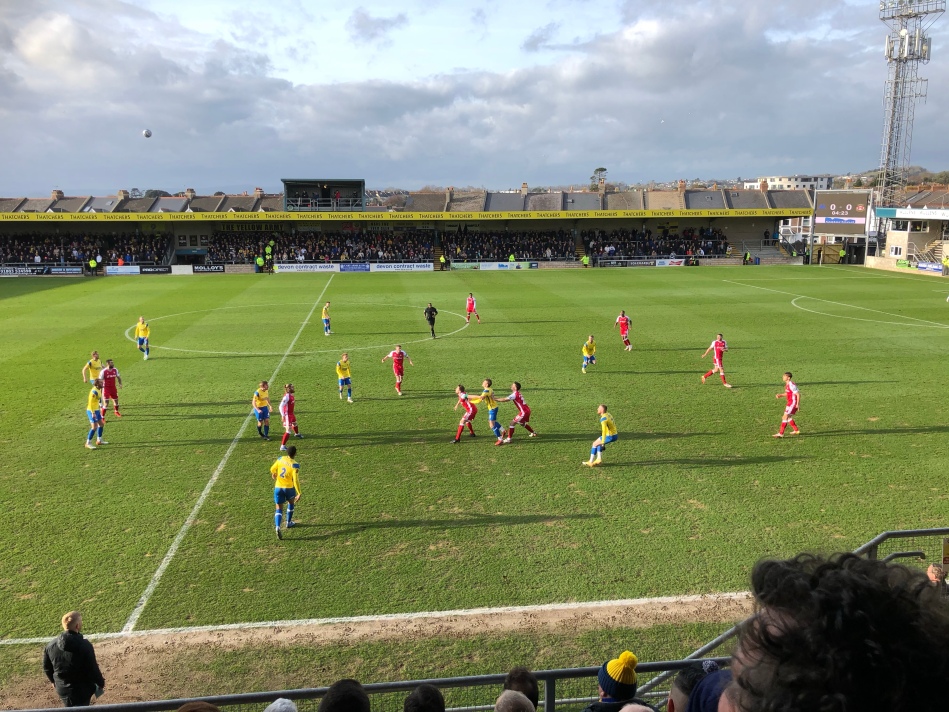 “I thought we showed bravery, not only from our big ‘uns, but our little ‘uns as well. The boys supported each other, and it turned into a never-say-die performance” – GARY JOHNSON