Aled returns to talk about his team Wrexham AFC

Hi Aled, so how would you summarise your season so far?

If I was grading it, might well be B-. Expected to be a bit higher about 3rd/4th considering the players we have got and the quality available. But since our last meeting, our results have been better and performances have definitely improved.How’s your recent form been?

From our last 7 league games we have drawn 1 and lost 1 but won 6. The draw and loss have only come because we had a red in the 2 games. It involved 4 away games 3W 1L. We look more threatening away from home than at home games. Scoring only 10 at home while scoring 32 away this season so far.What’s been your highlights?

Beating a decent Bromley side 2-0 (scoring more than 2 at home isn’t a regular occurrence for us). Last minute winner limbs madness away at Halifax. Beating Yeovil away 2-1 after being 1-0 down, the win was made even sweeter after the Yeovil scorer ran to the away end was goading the away fans after scoring. Winning at home 1-0 against Grimsby, Palmer scoring his first goal for the Reds. 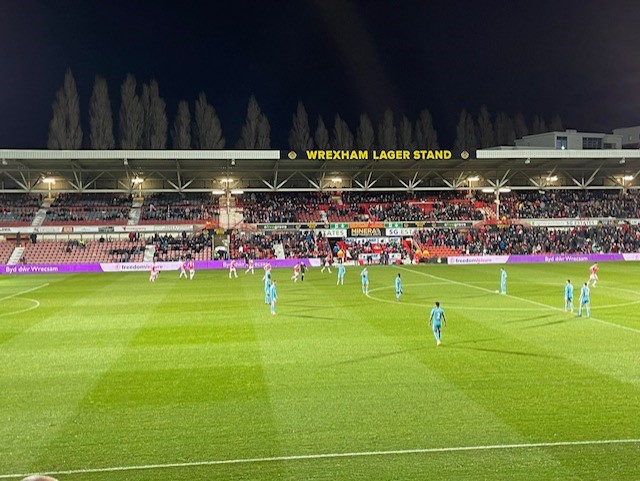 At the start of the season Luke Young didn’t perform to his usual best but recently he has definitely looked closer to his normal self. Jordan Davies is a quality player going forwards and has got a great free kick on him (look at his one against Weymouth if not seen already).

What do you make of the recent big money signings the club have made?

Palmer is a brilliant signing, big target man. Even though he is a big man he is surprisingly quick for his build. Haven’t seen much of McFadzean and O’Connor but from what I seen and heard about McFadzean he looks a decent player. O’Connor is highly rated as you’d imagine, considering he came from Southampton’s academy, he is a commanding CM who can also play on the left side of a back 3 which also suits our formation. Overall I am really pleased while also amazed that we got these players, because I am more used to the club looking at our own league or below for signings not 2 leagues above. It will be interesting to see how the 2 recent additions cope with non league life at Wrexham, Palmer has appeared to adjusted well (not surprised as I think he was in non league once with Mansfield).

What tactics does the manager like to use and what’s the possible line up for Saturday?

Style hasn’t really changed same with the formation and tactics, the usual formation being 3-5-2/5-3-2. We play quite defensively despite the players available but using the wings bringing the ball forwards. CB’s kicking balls forward to running wing backs to receive. After the new addition of O’Connor our midfield will definitely improve. With Lainton a regular between the sticks. Back 3 of Hayden, Tozer and Cleworth (Lennon if fit). Wing backs Reece Hall-Johnson and McAlinden providing balls into the box. While having Jordan Davies, James Jones and Luke Young in a mid 3 (wouldn’t be surprised if either James Jones or Jordan Davies made way for O’Connor for the game on Saturday) Front 2 of Angus or Ponti (after Mullin’s red card) and Palmer.Have you got the right man in charge and do you fancy your chances of promotion?

When I was asked if Parky (Phil Parkinson) was the right man before the reverse fixture I questioned it, but saw glimpses that he was willing to divert from his usual formation. After seeing us in recent games (may regret this) I think he is the right man even though we aren’t setting the league alight, we are grinding out results which is what’s needed. Like one person said attack wins you games but defence wins you titles. I predicted Stockport to get top spot before the season started and us ending 4th, whilst also thinking no promotion this season but definitely next season. After the January transfer window I still think we will finish 4th but not toppling Stockport (hopefully wrong and we get top spot) but I am beginning to think that promotion is definitely possible, more so than I did back in August.How many Wrexham supporters will make the trip?

My predicted away attendance is about 1k considering the buzz around the town.Which opposition teams and players have impressed you most?

Very impressed by Sbarra and Dallas of Solihull, Tshimanga of Chesterfield. Halifax look a quality side. Stockport just continue scoring for fun don’t they, anyone who finishes above them are winning the league.And finally, what’s your prediction for the game at Plainmoor?

We have a good away record recently so I am going for a 2-1 win. Palmer and Davies being the goal-scorers.

One thought on “OPPOSITION Q&A – WREXHAM AFC by Aled Roberts”