They say that Christmas is the time of good will to all. Well, there was certainly lots of goodwill on show at the Silverlake Stadium on Tuesday, but it was all in favour of the home side in the second half yesterday.

Hot on the heels of Sunday’s excellent 3-0 win against Yeovil, Gary Johnson named an unchanged starting eleven. There was only one change on the bench, with goalkeeper Mark Halstead free from isolation and replacing Keelan O’Connell. With Eastleigh having had their Boxing Day fixture postponed due to Weymouth’s Covid-19 issues, it felt problematic that were was no room for manoeuvre in our squad. But our own isolation issues meant it what was we had. There was an excellent atmosphere prior to kick off with lots of noise and chants, not to mention a shared Twix with my 9-year-old son. 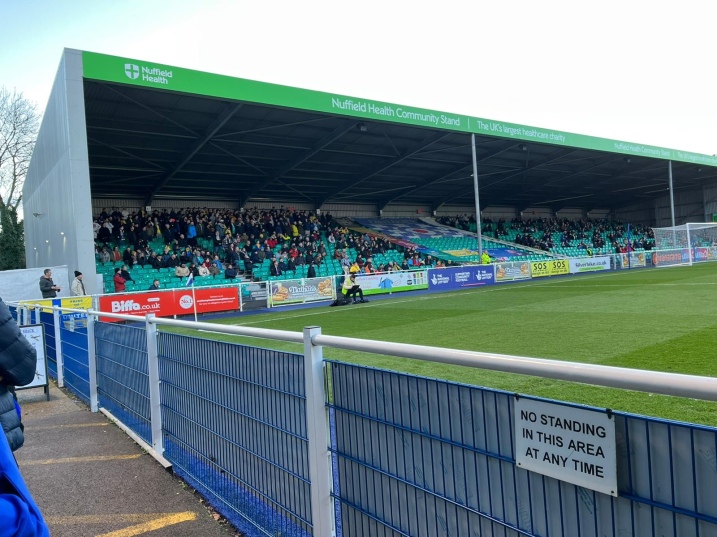 The first twenty minutes was everything that you want in an away performance. We were tight and compact defensively and looked to break with the width of Klaidi Lolos and Jack Sparkes when we turned the ball over. One early Eastleigh corner had to be nodded away from danger by skipper Armani Little, but it was a controlled start from the Gulls in the naughty black and white kit.

We then stepped it up and started to take over. Danny Wright shot fractionally wide from a swift counter, Lolos was denied at close range and other situations pinged around the box. But in the 32nd minute, GJ’s boys went ahead.  A swift counter fed Connor Lemonheigh-Evans down the left; he fizzed the ball into Armani Little on the left edge of the box who immediately turned it into Wright. He flicked it back round the corner to the on rushing Little to drive his shot inside the near post. A quality goal, and a yellow card for Little for daring to celebrate.

It was so nearly two a couple of minutes later. Jack Sparkes powerfully let fly from all of 25 yards out, only for the goalkeeper to spill it over his shoulder. It bounced off the cross bar, and back into his hands rather than in. A big let off for Eastleigh. The half-closed with Tom Lapslie limping off after being caught late. His replacement was Asa Hall, and although content at being ahead at the break, it felt like we should be further ahead. And so, it would prove.

Eastleigh came out with a renewed vigour and purpose at the start of the second half and almost immediately wasted an excellent chance. A long ball over the back line left Harry Pritchard in but he could only volley into the side netting. But the big moment was about to take place. Tom Whelan ran into the box, jinked past a couple of players and dived. I have tried to be as descriptive as possible and it was right in front of me so I had an excellent view. He was on a yellow card, it was obvious, nobody appealed so he would be off. But after a 3 or 4 second pause, the referee pointed to the spot. Absolutely unbelievable. It was as clearer a dive as you will see. He then thought it funny to score off the post and celebrate in front of the Yellow Army. Hard to explain to a 9-year-old being brought up on cheats never prosper approach.

The whole scenario rattled players and fans alike, and it took a few minutes to settle back down. But we just couldn’t get our passing game going, and with 23 minutes remaining, disaster struck. After a free kick award that also was never a foul, the ball was floated into the box. Tyronne Barnett headed down in towards the bottom left had corner. Keeper Shaun MacDonald dived down to claim it comfortably enough. But inexplicably, he allowed the ball through his hands and it bounced in off his face. A real error and just what we didn’t need.

Chiori Johnson soon replaced Jack Sparkes and United started to create some chances. Wynter had already headed over a half chance prior to the second goal, but we started to be camped in their half. Little had a free kick pushed away, Asa Hall headed straight at the keeper from 8 yards and Dan Holman almost scored as soon as he replaced Lolos, but couldn’t quite make contact with the ball. Eastleigh went into full-on time-wasting mode, but we couldn’t get another chance, despite numerous balls into the box near the end. Frustration.

Shaun MacDonald – 5 – didn’t have a huge amount to do in the game and didn’t make a save as such. But his mistake was game defining, and shows how goalkeepers rarely get away with them.

Ben Wynter – 7 – another solid game from Wynts. I would still like to see him get forward more and impact the game in the opposition’s half as he had against Yeovil.

Joe Lewis – 8 – what a reliable defender he has turned into. Against another team full of giants, he won everything in the air and used the ball better as the game went on.

Dan Martin – 7 – his improvement as a defender continued and he was able to deal well with most that was thrown at him. Like Wynter, doesn’t get forward enough.

Armani Little – 8 – Armani really is now dictating the pace of games from midfield. His vision, quality on the ball and interplay with CLE and Wrighty should stand us in good stead for the second half of the season. And he has 10 goals in 20 games. A good return for a midfielder.

Tom Lapslie – 6 – had been busy in the first half up to be whacked after passing the ball and having to depart early. Hopefully not too serious.

Connor Lemonheigh-Evans – 7 – another hard-working afternoon for CLE. Started the move for the goal, and worked tirelessly for the team. Wasn’t able to get on the ball in their final third enough in the second half.

Klaidi Lolos – 6 – ah, sigh. I just want him to impact games a bit more. He was lively in the first half, but he isn’t making game crucial contributions. But he held his position well again and kept the shape.

Danny Wright – 7 – we are just a different team with him in the side. Strong, tall, powerful and brings others into the game. We have nobody else like him. To have any chance of a play-off charge, it is absolutely imperative that he stays fit.

Jack Sparkes – 6 – a much quieter game after being excellent on Sunday. But his hammer of a left foot nearly scored what would have been a crucial second.

Asa Hall – 7 – did well after coming on late in the first half. he led the team from midfield but wasted the best chance that we created in the second half. What a man.

Chiori Johnson – 6 – I just don’t know what he is. He played on the right side of midfield again, but he doesn’t offer a huge amount in that role for me. A puzzle.

Dan Holman – 6 – had a half chance as soon as he came on,  but I am afraid that his signing hasn’t worked (yet).

Don’t agree with Chris’ ratings? Rate the players yourself here!

MAN OF THE MATCH – Dean Moxey

This was hotly contested in the car home but my son’s choice gets the nod from his Father too. Dean has been brilliant this season, and was again. His positional sense was outstanding, he won everything in the air, his quality from dead balls and long throws were a constant threat. And all in his 600th career game. Here is to many more in a Torquay shirt. 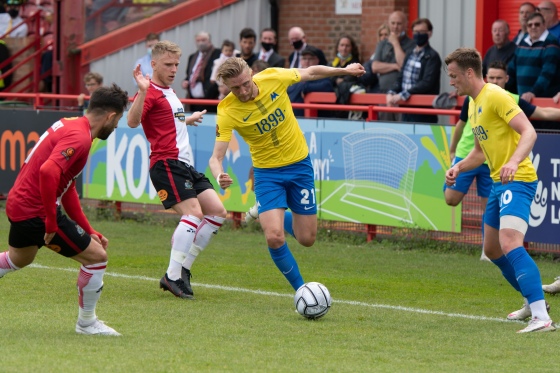 Joe Lewis and Armani Little – Lewis is now an outstanding centre back (may I refer you to the TT predictions for player of the season at the start of the season?). He never loses a duel, gives everything and has been so consistent. The same can be said of Armani. He is playing the best football of his Torquay career at the moment. As simple as that.

I thought that the system worked well again. It was a 4-2-3-1 again and the players are all playing in their positions, perhaps Lolos apart. There wasn’t as much from wide areas compared to Sunday, but we had much of the play but lacked a killer edge and dare I say for the 5000th time this season, quality in the final third. 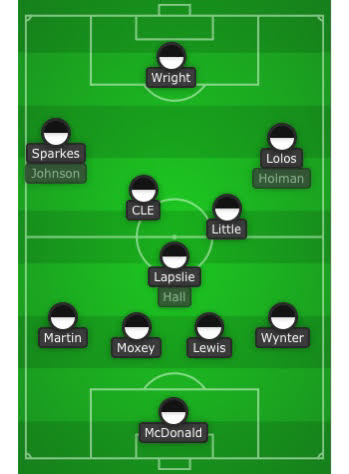 But it is down to the officials to deal with the behaviour of the players, and Mr Massey-Ellis did not. To give a penalty was horrendous and a total misreading of what had happened, but he was quick to give the home side most things. Wright got nothing for being man handled all afternoon, and his booking of Little for celebrating scoring a goal summed him up. Oh, and his ignoring the Eastleigh players trying to wind up the Torquay fans. Just poor all afternoon and not good enough for this level.

Eastleigh were like a lot of teams in the National League. They had two gigantic centre backs, a big centre forward and went back to front quickly. They didn’t play through us or try especially, and it’s frustrating to have lost to them. The behaviour of Tom Whelan badly, badly let them down too.

A disappointing afternoon. It was a game that we should never have lost, but we have to be more clinical. We had more than enough chances to get something out of the game, and the reason we didn’t wasn’t just a rank referee and a goalkeeping error. You have to take your chances.

32' GOAL FOR UNITED! Little gives The Gulls the lead!