My goodness, where to start.

This was going to be a walk in the park, right? Dover are bottom and everybody beats them, right? There’s no way that we can’t win, right? Have you watched Torquay before?

United showed two changes from two weeks ago, with Keelan O’Connell and Bryon Moore replacing the benched Chiori Johnson and new Daddy Connor Lemonheigh-Evans in a back again 4-4-2. A fast start was needed to get the 2892 fans, including NHS workers that club had invited, on their feet and into the game. How about going behind in the first five minutes instead? From Dover’s first attack, a lack of tracking down the left resulted in a cross being fizzed into the 6-yard box, and a combination of Travis Gregory and Dean Moxey saw the ball roll into the corner. Exactly not what was required.

Torquay responded swiftly after an early Dover change, with O’Connell seeing lots of the ball, and Klaidi Lolos buzzing around their back-line. Ben Wynter had an excellent opportunity but drove his left footed shot wide, and Lolos twice went close, once with his right foot and once with his head. Let’s just say that Dover weren’t being quick in most things that they were doing and the frustration was starting to grow.

So, there was a raw of relief when the Yellows equalised in the 34th minutes. From a throw in, skipper Armani Little picked the ball up on the left and moved inside. He drove a well struck shot at goal, and although bouncing slightly awkwardly in front of goalkeeper Adam Parkes, it was surprise to see the ball burst through his hands and into the net. United spent the rest of the first half on the front foot, with Lolos again going close.

With the half time chat around a strong second, what followed can only be described as scrappy at best. United had a lot of the ball but lacked any real quality and drive through the final third, and a serious of half chances came and went without a real chance. Credit to Dover, who tried to play on the front foot but also lacked any incision at the business end. A quiet full debut for Bryon Moore ended on the hour when he was replaced by Johnson, only for him to pull up on his first sprint and limp off, to be replaced in turn by Jake Andrews, who soon drove a left footed shot narrowly wide.

As the atmosphere became more and more agitated, a poor moment saw Little announced as the sponsor’s Man of The Match. A section of the ‘fans’ booed loudly – totally unacceptable. But we all know football, and the game has a habit of dealing its own punishment. As the clocked clicked into Gary Time, sorry, Injury Time, United strung some passes together. Jake Andrews dinked a cross to the far post, Wynter challenged for it and it dropped to Little, centre of the goal 8 yards out. He controlled a lovely left footed volley and rove his shot into the roof of the net. He waived his hands at the crowd and didn’t smile, a massive shame in a great moment.

United saw it out through six minutes of injury with only one scare, Shaun MacDonald blocking a cross come shot. Whether you win 5-0 or 2-1, it’s three points. 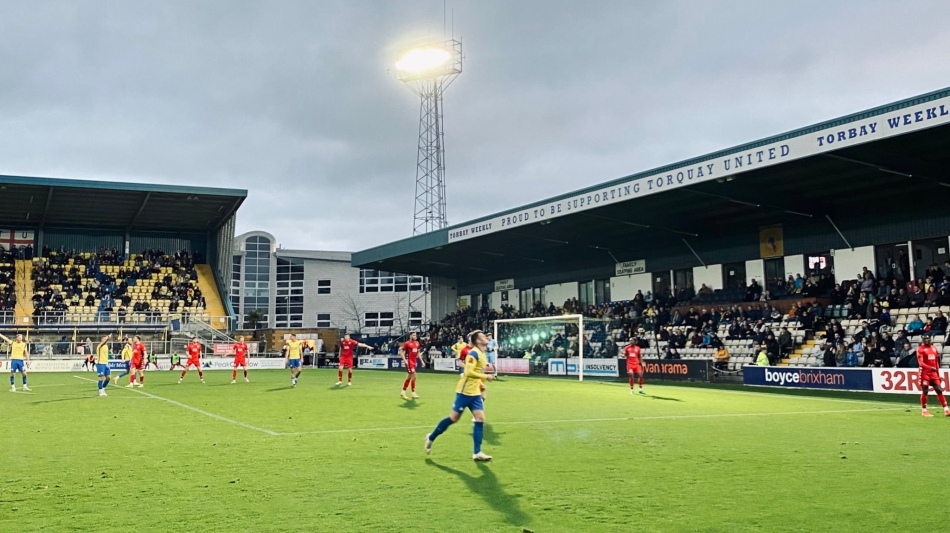 Shaun MacDonald – 6 – A quiet afternoon for the United keeper. No chance with the opener and not troubled until injury time, but he stayed alert. Huge kudos for taking the ball when a late skirmish took place and running away with it up the back of his shirt.

Ben Wynter – 6 – Wynts seems to be struggling on confidence a little at the moment, but kept going and his challenge at the far post kept the ball alive for the late winner.

Harry Perritt – 7 – Another calm and assured performance form the Accrington loanee. He is a passionate chap and has fitted right in with the group. The early signs of the partnership with Joe Lewis are good.

Joe Lewis – 7 – Business as usual from Joe. Won everything in the air and led well. He has benefitted massively from the return of MacDonald and seems far happier and more communicative.

Dean Moxey – 6 – Solid enough from Dean again. Unlucky with their goal as he couldn’t quite deal with it. His left foot can always produce something.

Keelan O’Connell – 6 – Lively in the first half and saw plenty of the ball. But lacks any real output and needs to work on an end product. Very good work rate and never stops running.

Tom Lapslie – 6 – Combative as ever. You can never fault his work rate and effort and kept going to the end. A couple of important interceptions.

Byron Moore – 5 – A quiet full debut. Didn’t have lots of opportunity to run at Dover’s backline and ended up going backwards and sideways too often. Building up his fitness.

Dan Holman – 5 – Ah blimey. Another innocuous display from Dan. He just isn’t able to influence games and get into goal-scoring positions. Limped off with a worrying looking leg injury near the end.

Klaidi Lolos – 6 – Another hard working display. A few half chances in the first half and some nice feet at times, but he is pushed off the ball too much and really has to work on an end product. He was also isolated too often.

Chiori Johnson N/A – One sprint to a throughball and an injury for Chiori.

Jake Andrews 6 – One decent effort on goal, and tried to get on the ball and influence proceedings.

Gabby Rogers 5 – Very little involvement after his arrival for Holman.

Do you agree with Chris’s ratings? VOTE HERE

MAN OF THE MATCH: Armani Little

Now this may not be a popular one. Yes, he gave the ball away trying to make something happen, yes, he took some appalling set plays, and yes, he is infuriating. BUT THE BOY HAS REAL QUALITY. And in a game that lacked real quality, two moments from his boots won the game. Two excellent strikes and a really good technical one for the winner in particular were the difference. Simple as that. As for booing your own players……..

The two centre backs Perritt and Lewis were solid and won everything, and O’Connell and Lolos worked hard and saw plenty of the ball. But the latter two really have to work on some final output and delivering telling contributions in games.

Back to 4-4-2 for the first time in a while. I have to say that in a game that lacked quality, tactics didn’t really play too much of a part. United played with two wingers but struggled to get them wide enough to put good delivery into the box. 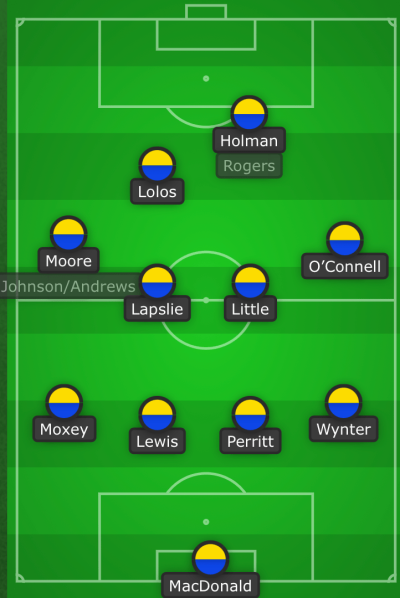 As a football fan (clearly not today), you have to feel sorry for their fans. 49 made the journey to see their team lose their 11th game in 14. They sat in with a 4-5-1 formation and wasted time form the off. Fair play to them in the second half as they had a bit of a go, but such a young team would struggle in this league, even without a 12-point deduction. 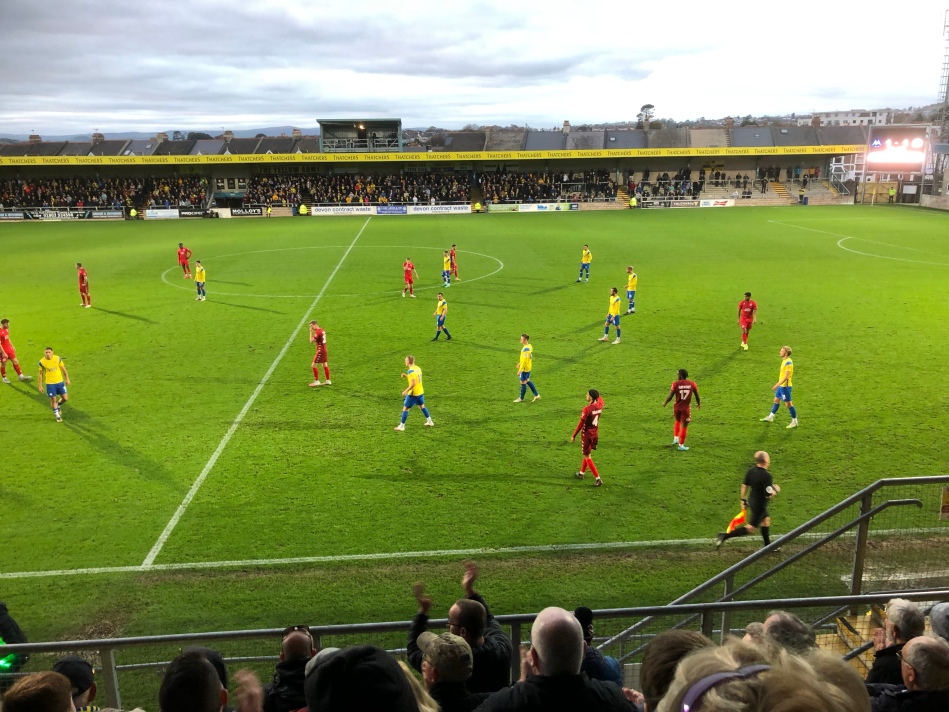 Quiet day for the officials. Nothing really of any note other than perhaps not dealing with Dover’s time wasting, and the total ignoring of the six second rule (remember that?). Two yellow cards for each team.

Well, it was the three points that we all hoped and expected, wasn’t it? But it wasn’t anywhere near as emphatic, comfortable and confidence building as we had hoped. We fortunately had the player that made the difference. That is four home wins in a row at Plainmoor now. Next stop Barnet and to start to sort out this frankly horrendous away record.

Completely unacceptable and embarrassing behaviour today from some of the crowd in booing Armani Little for being motm – give your heads a wobble Yellow Army 😐#tufc #coyy pic.twitter.com/E3qazN9zik