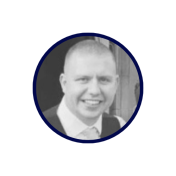 After a disappointing week for the Yellows in the cup, it was back to the bread and butter of the league, with King’s Lynn making the long journey down to Plainmoor from Norfolk.

With the fixture a designated “community game”, those not aware could have been forgiven for thinking that the whole town of Kings Lynn had followed their team down to TQ1 and packed the away end. However, the away end was instead made available to members of the local community who were lucky enough to receive free tickets to the match, with 42 Kings Lynn fans positioned in Bristow’s Bench.

After four sub-standard performances on the bounce GJ changed the shape, with the side lining up in a 4-3-3 formation. In came Perritt for his debut alongside Lewis in the centre of defence, Wynter and Moxey moving out to full back. Chiori Johnson switched to central midfield, flanked by Armani Little and Conor Lemonheigh-Evans. There was also a debut for Sinclair Armstrong, who started up top with Dan Holman and Klaidi Lolos either side of him.

Torquay’s intentions were clear as early as the third minute, as a ball was lofted in behind the King’s Lynn defence for Sinclair Armstrong to run onto. He got in front of the defender and fired a firm shot at goal which was saved well by the Linnets’ keeper.

New boy Armstrong showed plenty of glimpses of what he would bring to the side in the early stages, holding the ball up well whilst also not being afraid to run at the Lynn defence.

Torquay were enjoying plenty of possession, but the final ball was often lacking and sloppy mistakes were a common theme. Just after the half hour mark the Linnets fired a warning shot; Lemonheigh-Evans lost the ball in the midfield and King’s Lynn broke, after exchanging passes their midfielder shot dangerously from 20 yards out. Luckily the ball clipped off the outside of the post, with MacDonald a grateful spectator.

Torquay reacted well and started to carve out some half chances, then in the 41st minute we made the breakthrough. A long throw from Moxey (a vital weapon all game) was flicked on by Lewis, which fell to the feet of debutant Armstrong, the QPR loanee made no mistake rifling the ball into the roof of the net. 1-0 Torquay!

The half time whistle blew shortly after and although not remarkable it had been an improved performance from the Yellows, especially after a poor couple of weeks.

King’s Lynn started the second half a lot brighter as Torquay sat off them, but struggled to carve out any clear chances.

On the 70th minute GJ looked to his bench to freshen things up, as on came O’Connell for Holman, changing the shape slightly. It had the desired effect.

Torquay started to stamp their authority on the game again and enjoyed a decent spell of pressure. First Lolos broke through after a mazy run, but his shot was blocked, when it looked like he should have really passed it to one of his un-marked team mates.

A couple minutes later the powerful Armstrong charged into the penalty area on the left, before firing a cross across the goal which cannoned off a defender, forcing a brilliant save from Paul Jones as he tipped it onto the post from point blank range.

United’s tails were up and it seemed inevitable that a 2nd goal was on its way. In the 78th minute it arrived. Moxey floated a ball into the box, Armani won his header and the Linnets keeper could only spill the ball as he tried to claim it under pressure from Lolos, and there was Joe Lewis to thump the ball into the net. 2-0 Torquay and game over.

Torquay continued to pile the pressure on with Keelan O’Connell coming close, but couldn’t find a third as they saw out a professional performance against an away side who will do well to stay up this season. 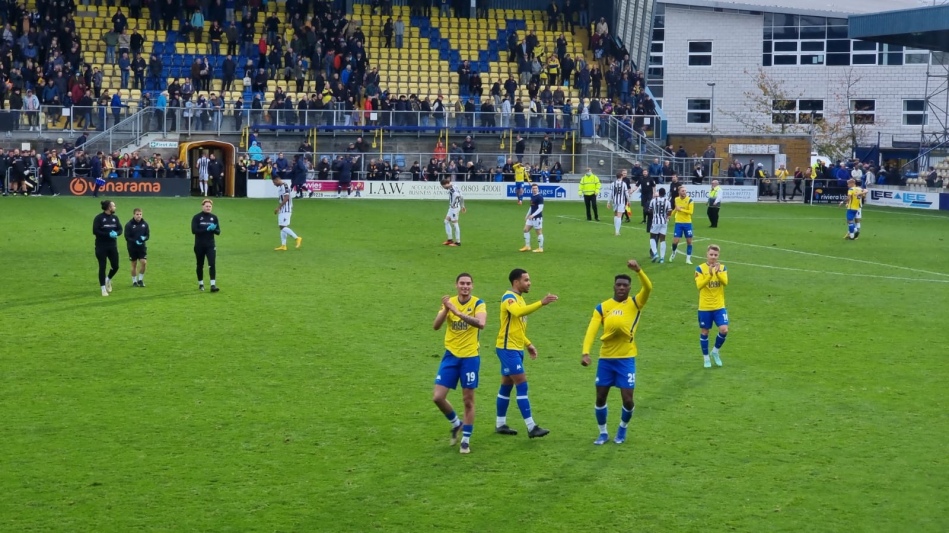 Shaun Macdonald – 7 – Didn’t have huge amount to do but was always on hand to collect a cross or make a save when called upon.

Harry Perritt – 7 – Started a little shaky when he put a couple balls into the stands as he looked to play out from the back, but he grew into the game and defended well.

Joe Lewis – 8 – Defended resolutely and also won a lot of flick ons from Moxey’s long throws which were a threat all game.

Dean Moxey – 7 – Solid at the back and put some great balls into the box.

Chiori Johnson – 6 – Worked hard but passing was sloppy and never felt like he stamped his authority on the game.

Armani Little – 6.5– Did okay but struggled to impose his quality on the game. Grew into the game in the second half and won an important header which led to the second goal.

Connor Lemonheigh-Evans – 6 – Not sure the role Connor was asked to do today played to his strengths as he had to help out a little more defensively and subsequently couldn’t get as involved in the final third as he would like.

Dan Holman – 5 – Struggled to get into the game but did work hard and put in a shift.

Klaidi Lolos – 7 – Improved as the game went on and looked to be establishing a good partnership with Armstrong second half.

Sinclair Armstrong – 8 – Great debut from the 18 year old, His game is all about strength and pace and he showed that in abundance today. Deserved his goal and looks a real focal point that we can build around going forward

Keelan O’Connell – 7 – His introduction helped to freshen things up on the pitch and his pace allowed us to get further up the pitch a lot quicker. Could have had a couple goals during a strong spell of pressure towards the end but his shooting let him down.

Do you agree with Joe’s ratings? VOTE HERE

It's been a while Gulls fans! #tufc pic.twitter.com/2lHsE82T4Y

MAN OF THE MATCH – Sinclair Armstrong

Gary Johnson was right when he said he’s 18 going on 25! His strength and ability to hold the ball up allowed us to get up the pitch and he was always looking to turn the defender and run at goal. Took his goal really well and was a constant menace for King’s Lynn. Enjoyed the acclaim of the crowd afterwards and why not!

Joe Lewis stood out today, winning his battles in defence and also being a constant menace in the opposing penalty area. A second half injury had us all nervy for a couple of minutes, but the big Welshman bounced back and eventually found the clinching goal. Good man.

We started with a 4-3-3  before changing to more of a 4-4-2 when O’Connell was introduced on the 70th minute mark, which sparked a strong spell of pressure as we finished the game with aplomb. Not sure the 4-3-3 got the best out of the side and definitely wouldn’t work against stronger opponents, as it leaves us a little light in midfield and also too narrow going forward. 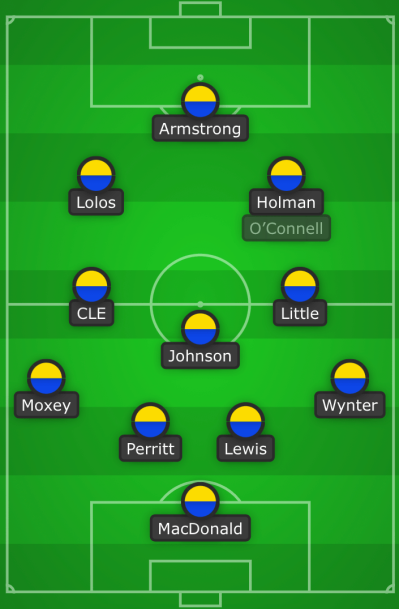 Looked to play out from the back when they could and they were certainly better at it than Wealdstone! However they struggled to carve out many real chances and seemed a little toothless up front. The fact that they are only naming two subs on the bench in October doesn’t bode well and they’ll do well to stay up this season unless they can bring a few quality players in.

Ref Huxtable wasn’t his usual self and generally stayed out of the limelight for once! I couldn’t disagree with the majority of his decisions today.

The change in shape in the second half with Holman coming off for O’Connell edged the game in our favour, when it looked like Kings Lynn were getting back into it. Suddenly we got the ball forward to the front men a lot quicker and sharper interplay found holes in the defence. In the end it could have been 3 or 4, but for some resolute defending from King’s Lynn.

So Kings Lynn weren’t great and will certainly be pleased with themselves if they are still in the National League for 2022-23, but you can only beat what’s put out in front of you!

After the results over the last couple weeks, a game against relegation favourites with Brett Huxtable reffing had the potential to be a banana skin, but we saw the game through professionally whilst giving debuts to two young loanees who definitely improved the side. Great to see Addai back on the bench as well, which should increase our options in the coming weeks.

Job done and onto Wrexham (a) next week!