Chris blogs about following the Gulls from the US

Hello from the other side….

I pitched this blog to Dom at least 8 weeks ago. Full of vim and vigour, I knew I had it in me to write something about football after an absence of about 5 years. And then..suddenly I’m watching the play-off semi-final with a hazy memory of a promise to send it ‘this weekend’, and then I realise I have to do a not-very-hasty rewrite after shaking off the Ashton Gate ‘hangover’.

So, here we are, later than a Ben Wynter finish. Everybody has their own unique Torquay United fan story; this is mine.

INSIDE, ASTROTURF PITCH. A VARIETY OF MIDDLE-AGED INDIVIDUALS (MOSTLY MEN) CONGREGATE ON ONE SIDE. ONE IS WEARING A TORQUAY UNITED SHIRT FROM A FEW YEARS BACK. HE’S LIGHT ON HAIR, A TAD HEAVY ON…EVERYTHING ELSE. A SECOND MAN, YOUNGER AND IN BETTER SHAPE, SAUNTERS OVER.

Oh, it’s the team in the town I grew up in – I’d be surprised if you’d heard of them.

C’mon, I watch the Pre-meer League, I know all of the English teams!

BALLARD (SHRUGS, AS IF HE’S HAD THIS CONVERSATION A LOT)

CHAD, MISPRONOUNCING IT TO RHYME WITH ‘DORKY’

Torky? What division are they in? The Championship? Who is your Pre-meer League team, then?

MY FATHER’S TEAM WAS WEST HAM BUT..

Perfect! I like them, they have one of my team’s players on loan..

15 years ago – almost to the day –  I made a decision to leave the UK. The reasons are varied, and probably not very interesting to most, but in any case, I left my job, flat and car behind and ventured across the pond towards a new life. It meant that I’d be unable to follow this silly little football club of ours in the manner that I’d got used to; sliding out of the betting shop of which I was the manager at 2:50pm every other Saturday, joining in the midweek away trips to far-off exotic locales like Mansfield, Stockport, and Bournemouth. You know, being there.

In the intervening decade and half a lot has happened; marriage, divorce, job loss, horrific tragedies in town, family deaths, finding a new family, and getting married once again. I’m pretty certain this one is going to work out!

But hey, things now are really great. I say this not in a Facebook-esque “ner ner, my life is so awesome” way (shut up, Karen, I know you secretly hate your kids); but by way of background. Despite all of the stuff that was going on in the intervening time, one of the very few things that has kept me tied to the place I called home for the first 27 years of my life has been a group of men wearing yellow running around an occasionally sun-kissed field. I’m older. I have less hair, more heft, and a different passport, but I’m still afflicted with a constant need to know what is happening at Plainmoor, usually multiple times a day.

Whether it’s looking for latest scores on obscure websites, trawling internet forums for the latest crumb of information or transfer gossip, or trying to get Radio Devon to work properly – the latter of which seemed at times to require some sort of advanced computing degree – the life of an exiled fan is one that is generally (and obviously) disconnected. This has been the life of an exile for way longer than I’ve been one myself. Social media has doubtlessly helped; it’s a lot easier to commiserate over the latest disgraceful performance in some awful pit of despair in the other end of the country, when you have ready access to other passengers upon this ship of fools. Until recently, though, feeling ‘present’ wasn’t something that most of us were able to achieve.

In some ways, it’s an interesting exercise in discussing what makes a ‘fan’. Is it proximity? Is it going to games? If it’s both of these, we wouldn’t have supporters in even further-flung places than Newtown, Connecticut, such as fan clubs in Norway, or Brazil. But we do. I’m generally wary of the phrase ‘real fans’ because it’s always struck me as the ‘true Scotsman’ argument of the game, but for me, if you have made some commitment to follow a side through rough times and smooth – regardless of whether or not you’ve bought match tickets, a shirt, etc – then you are entitled to call yourself a fan. Heaven knows that people aren’t queuing up to support Torquay United. I often joke that it’s ok if Americans haven’t heard of them; half of the people in Torquay haven’t heard of them either. 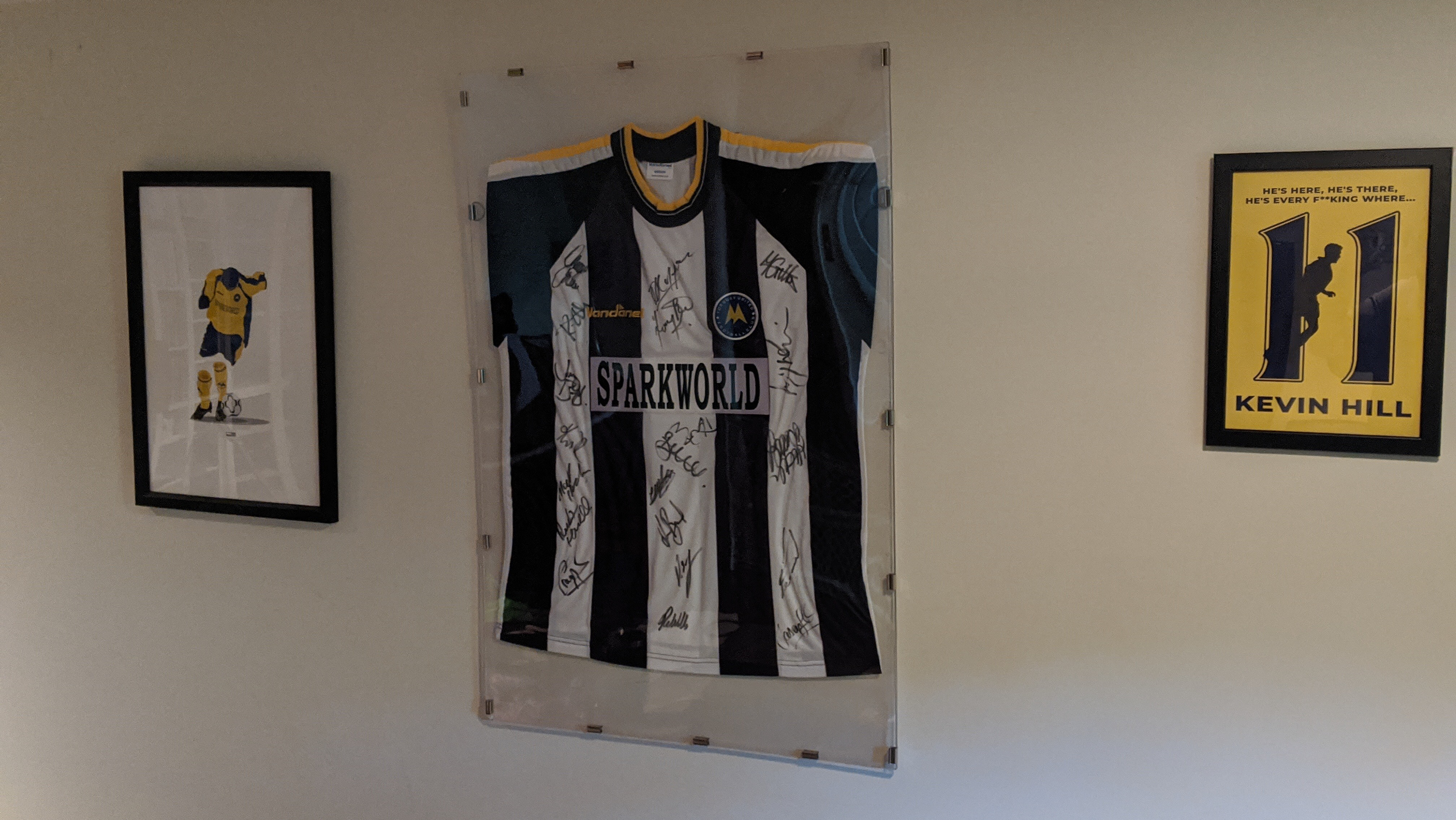 I was asked a few weeks ago if following Torquay United is fun. It’s a hard question to answer in some ways. In the past, most of the fun came from being at Plainmoor, standing on the Popside with fellow fans, talking about the team, and doing the occasional travel excursion. The football was almost secondary, which most of you will agree was probably a good thing given some of the teams we’ve put out over the years. Without that sense of immediacy, I’m reliant on the football itself a lot more. It is fun when the team plays well, but towards the end of the season it became more nerve-wracking, and the final itself was both awesome and terrible in a way that few non-football fans can ever understand.

In response to the question, I had to reply with “It’s fun with a 90% chance of being terrified”.

But it turns out that a global pandemic has been great for those of us who aren’t able to get to games regularly. With streaming of all games (actually – legally speaking – “most games”, since BT won’t make their broadcasts available outside of the UK) readily available, not only have we been able to actually see the team play, we’ve also been able to contribute financially to the clubs (and other sides, too, although I am still mildly enraged – think about a puppy from whom you’ve taken a favourite toy – that King’s Lynn felt that charging £15 was OK)

I had briefly considered trying to get tickets to the playoff final but with the restrictions still in place – and a ten day quarantine! – it would not have been possible. Instead I had to make do watching it at home, despite having needed to move my sofa so I could spend some time hiding behind it.

There’s no need to go into much detail about that game here, as it’s been done by better qualified people already (and it still stings) but in any case, having the streaming option available allowed those further away to feel involved with the club once again. At a point in history where many have felt isolated from friends and family, it’s nice to know that in many ways, the world keeps on shrinking in ways that allow us to be part of communities that previously would have been lost to us entirely.

It’s all meant that I have felt connected to the team again in a way that I have been unable to do in any meaningful way since I left. Of course, it probably helps that the side was good last season, but I hope there will be a way in the forthcoming campaign of continuing to stream games. Listening on the radio is not the same as seeing it, just as seeing it isn’t really the same as actually being there.

I’ve emailed the club and told them that I would happily stump up for an actual season ticket if it meant I was able to access the games on streaming, as given my situation, watching it on television is the best I can hope for. As things stand now, it’s not clear that this will be possible – the decision isn’t the club’s to make, and I have essentially zero faith that the head honchos of the National League have the ability to organise anything in a timely fashion, but I would not be any sort of Torquay supporter if I did not have some sort of optimism despite the lack of any evidence to support.

I do still hold out a vain hope that I’ll be able to reschedule the trip back to England that was cancelled in April 2020, but until visitors from the US are allowed back in I shall be content to do my bit from my living room in suburban Connecticut, and will keep wearing a Torquay United shirt when I play football, hoping against hope to have a meaningful about the team that I’ve unwisely found myself loving for the best part of thirty years.

Now..COME ON, TORQUAY – tell me about the 10 great players we’ve signed, please!

One thought on “MY GULL EXILE STORY by Chris Ballard”