“I reckon we’ll edge this one, with GJ back at Bristol City, it’s written in the stars”

Who’s still got ‘Sweet Caroline’ lodged in their brain? Surely not just me. Could last Saturday have been much better? Hardly. Entering the gates you could sense the atmosphere would be fantastic, as spontaneous noise burst out amongst the Yellow Army and the bang on playlist revved up the vocal 1709. The clappers also made a difference. Not a gimmick I would want to have every game, that would test my sanity…but on the day it felt right and worked a treat as the decibel level stayed brilliantly high.

In the end it was United who triumphed but the game could have gone either way – with County posing us some problems near the end of 90 minutes and testing our nerves in Bristow’s. But this Torquay United team would not be denied and as the game wore into extra time it was us who pushed harder, showing that character we’ve seen many times this season and finding a way to victory. Terrific team spirit and fitness that we’ll need again on Sunday, but what an afternoon that was – one of those games that will live long in the memory.

Tough to pick out certain players but I have to start with Danny Wright (Wright, Wright). The announcement of his name on the team-sheet gave us all a boost before kick-off, and came as no surprise to me. You could sense that Gary Johnson was pushing to have the striker back in the team. Immediate impact followed from Danny with a deflected first goal and then a second that was simply perfect. That didn’t surprise me either. What did surprise me was how Danny kept going (and going), playing all 90 minutes and injury time, during which he was no passenger. What an effort and illustration of heart from the chap, a huge difference maker for United.

Apart from that every man did their bit, from Covolan making a fine save when it mattered, Lewis and Sherring plugging away at the back, Asa Hall scoring yet another crucial goal and leading heroically, Connor causing County trouble every time he got the ball and sub Kimpioka running and running to help bring the game home. The celebrations were joyous after, with a somewhat burnt but unbuckled Gary Johnson serenading the crowd and a sense of huge pride filling Plainmoor – it doesn’t get much better. 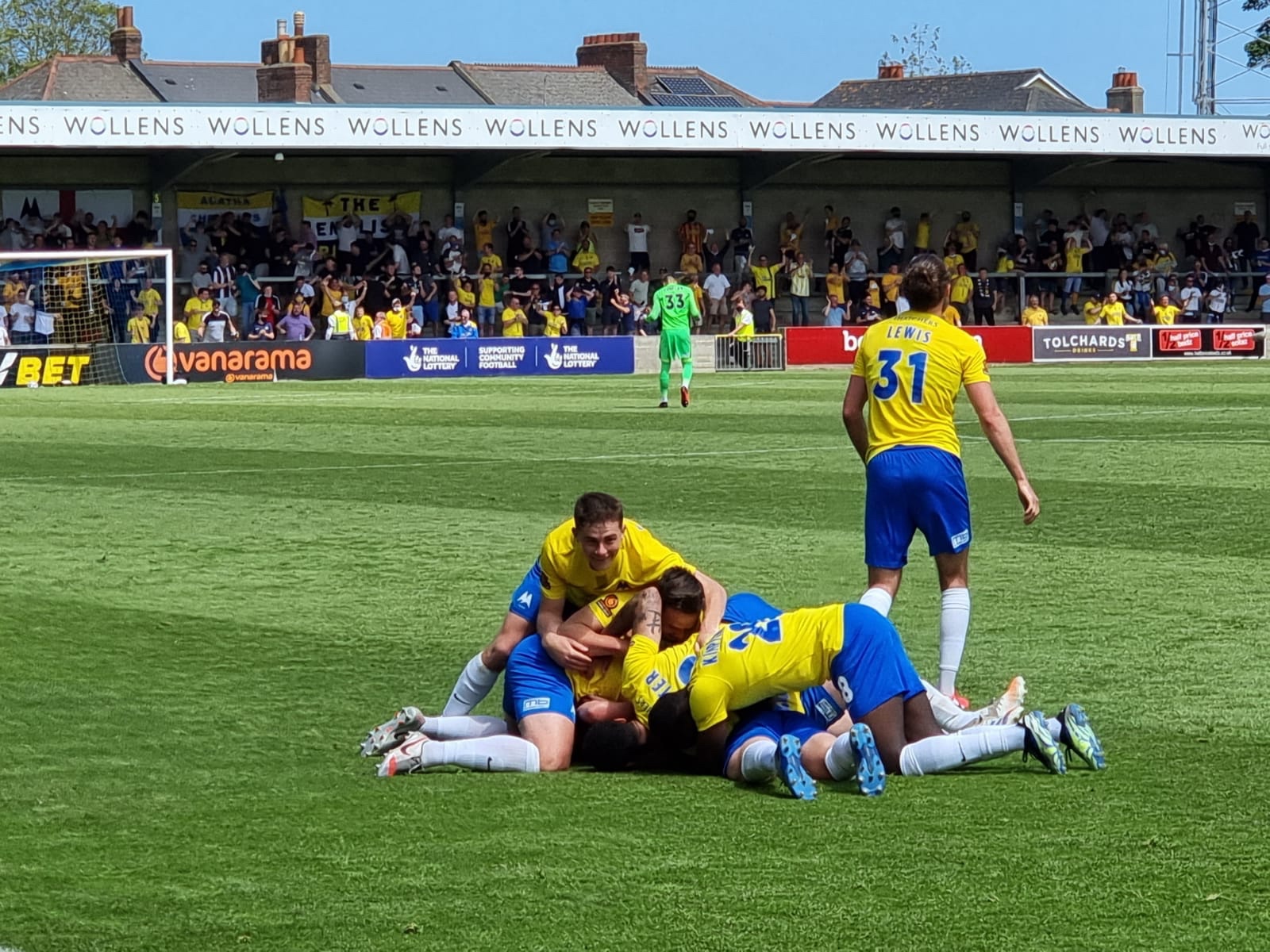 Maybe Sunday will trump it, who knows? In delving back into previous Hartlepool V Torquay fixtures there’s a lot to choose from. 83 games being played overall, but I have to be honest not many stick out. So let’s shimmy back uneasily to the 21st April 2018. This was a Gary Owers’ team and one staring relegation in the face as they travelled up to Victoria Park. An early Ryan Donaldson deflected shot put the home team in front as the relegation trap door started to creak open, then Brett Williams missed a penalty to add to the gloom (it was that sort of season).

Aaron Cunningham was sent off for the Monkey Hangers in the 2nd half, and then the lively Rhys Healey did salvage an equaliser for the Gulls on 82 minutes. But try as they may United couldn’t find a second goal, and come full time our place in regional football for 2018-19 was confirmed. A horribly grim day for all supporters. A game like this makes you appreciate what eventually happened next, as Owers was thankfully relieved of his duties and Gary Johnson kick-started us back into life. We reached the lowest of lows, enjoy the excitement of a play-off final.

Roll on 2020-21 and Hartlepool and Torquay were both billed as outsiders for the National League season, and both have gone on to achieve much more than that. The 31 October 2020 is probably where our performance peaked. On BT Sports the Gulls were absolutely imperious, Danny Wright bagging two early goals, and Ben Whitfield adding another to put us 3-0 up by half time. Would the Gulls take their feet off the accelerator in second half? Barely. Danny Wright grabbing his hat trick after a team move out of the top drawer and then Gary Warren sniffing out a fifth. The BT narrative of us being plucky underdogs looked foolish, we were proper contenders.

After winning one fixture 5-0, there is always the concern that the return will not go your way and so it proved at the start of March. With Danny Wright still missing and the Gulls struggling for form, Luke Molyneux struck early and in the end that was enough to gain Hartlepool some revenge. United did push hard to equalise, but found goalkeeper Ben Killip in great form for the visitors. The lead at the top had been lost and a degree of panic set in amongst the Yellow Army. We did come again but looking back that was certainly a critical loss in the title race.

So what will Sunday bring? In terms of tactics Hartlepool play the same formation as Notts County (3-5-2), but are less likely to dominate possession than the team from Meadow Lane. Against Stockport County they stood firm defensively, getting down the flanks where possible, gained a foothold in the game and then on-form Rhys Oates did the rest – they’ll be hoping for something similar against us. Oates is having an excellent season and his partnership with Salford loanee Luke Armstrong will definitely keep Sherring and Lewis busy. After last Saturday’s test the young centre backs are ready for another crucial battle.

In other areas contests involving veterans could be key to who wins on the day. Asa Hall and Nicky Featherstone have both had excellent seasons and will wage war in the midfield. Meanwhile 36 year-old Danny Wright will have to contend with 35 year-old Gary Liddle, who commands the Pools defence from a sweeper position. Fascinating match ups to come, our lads won’t take any step back from any of them I am sure.

In the end, much like in 2009, it will come down to who performs best on the day. I think a tight and tense afternoon awaits, and the 90 minutes could hinge on who takes one good chance when it arrives. Again, just like last time, Gary Johnson’s experience is key for us, but Dave Challinor has also had experience of such occasions and will be desperate to exploit any weaknesses in our make up. The decision to employ on Kyle Cameron on the left wing was a turn up from GJ and County didn’t know how to handle it! I would guess that Jake Andrews moves back into the line-up, rather than attempt that trick twice, but who knows. The line-up will be highly anticipated, but whatever the formation/team, if our boys are at it then we have a great chance.

Another key? The Yellow Army doing their bit again. We proved so much on Saturday, staying positive when County scored and helping to push the team over the line in extra time. I’m not sure we can recreate this in a bigger stadium (and I wish we had 5k rather 3k) but all we can do is our best. It was sad to hear about supporters not getting tickets on Wednesday and our online system was always going to throw a wobbly, but enjoy the occasion wherever you are. One more game of one of the strangest seasons in our history, maybe they’ll be a Sills moment to delight us all and maybe come 4ish on Sunday we’ll be ready for the Football League once again. Prayer mats out, seven years has been too long – I reckon we’ll edge this one, with GJ back at Bristol City, it’s written in the stars..

See you around on Sunday and bring the noise. On our way, on our way…