Last time I did one of these, I had 11 goals to describe. This time, there were maybe 11 chances for both sides combined but barely any of them had a goalkeeper particularly fearing that they were going to be beaten.

At the start of the season, this was the kind of game our merry band of travelling supporters would have really been looking forward to, two of the bigger names in the National League and both expected to be up there challenging for promotion. Although County have somewhat flattered to deceive so far, Torquay had to be on their mettle to secure a share of the spoils in a game which took a while to get going and saw both sides have their spells on top before eventually cancelling one another out in terms of missed chances, possible red cards and shots on target.

But what a different game it might have been had referee Tom Reeves, who sent Adam Randell off when the Gulls faced Boreham Wood back in November, been given the chance to see Enzio Boldewijn’s early tackle on the Plymouth loanee. High, late and studs coming down hard on Randell’s ankle – a stick-on red card, albeit taking a number of replays from different angles to spot.

The home side’s first threat came from a sloppy Sam Sherring back-pass, but Shaun MacDonald was alert to the threat, before Billy Waters had Torquay’s first real chance on the counter-attack but his tame effort was easy for home ‘keeper Sam Slocombe to deal with. Debutant Max Sheaf, in for the injured Asa Hall, volleyed off target and their best chance of the opening period came from a County defender, with Connell Rawlinson forcing Slocombe into an excellent save with a misplaced clearance.

Slocombe had to be lively again to spare his defence’s blushes moments before the first-half, which ended soon after Ben Whitfield became the first of a number of Torquay players to have claims for a penalty turned down by Reeves. More defensive frailty early in the second half gave Waters a chance, but his chance was blocked, and Kyle Cameron – steady as ever at the back – was apoplectic after appearing to be pulled down in the area.

Boldewijn wasted a half chance from just inside the box for County before substitutions started to affect the tempo of the game for a little while, Torquay bringing on Josh Umerah for what turned out to be an action-packed 32 minute cameo – more of that to come.

Umerah was nearly on the end of a brilliant United move, started by Nemane, just after coming on but his desperate slide was not quite enough to get on the end of a fizzed cross by Whitfield, who was becoming more and more influential. Soon after, Josh was at the centre of an incident at a corner when – only on replay – he was lucky to escape at the very least a yellow card for putting his head in on County defender Richard Brindley, who he would later force off with blood pouring from a facial wound after accidentally kicking him as he tried to force the ball over the line.

County remained threatening, mainly when they were able to get Ruben Rodrigues into the game. He had been ably marshalled by Sherring in the first-half before being moved more central in a tactical switch. He had a shot well blocked by the massed ranks of the Gulls defence, with the rebound seeing MacDonald make a sharp save to deny Jake Reeves. Umerah managed to “face” another hard Whitfield cross miles wide of goal and there would be more chances in the final 10 minutes, first of those seeing MacDonald come to the rescue again as he pushed away a well-struck effort from sub Eilsha Sam.

But the best two openings – one each – were still to come, and it was that man Umerah who wasted Torquay’s as he got his feet mixed up in trying to convert a low cross from Connor Lemonheigh-Evans. Cameron had a rare effort on target in the final minute of normal time, but no real problem for Slocombe, and there would be an escape at the other end when Kyle Wootton stabbed narrowly wide from eight yards with the goal at his mercy.

And that would be the final chance as both sides had to settle for a point from a game with plenty of effort but not a great deal of quality in the final third.

FT: A hard-fought point for United at Meadow Lane as the match ends goalless.

MacDonald – 8: Excellent performance. Very good in dealing with some dangerous crossed balls and did everything asked of him in terms of shot stopping. Hard to fault.

Sherring – 7.5: Kept Rodrigues fairly quiet in the opening 45 minutes and continues to impress in a position which he was not brought to the club to play in.

Warren – 7: He and Cameron had a tough afternoon dealing with two big centre-forwards in Wootton and Effiong, who barely had a sniff before coming off early in the second-half.

Cameron – 7.5: Considering he was booked (rightly) inside the first 15 minutes, the captain performed very well again. You can almost pencil him in for this kind of score every week, wherever he plays, but I imagine he might wish he had passed to an open team-mate rather than shot when presented with his late chance.

Moxey – 7: Solid as a rock again, put in a couple of important challenges to stop Notts County forwards from having easier shots on goal.

Randell – 7.5: He’s had a couple of rough games recently but it’s great to have his signature secured for the remainder of the season. Ran the game in midfield in the first-half, but perhaps guilty of over playing a couple of times when a shooting chance was on.

Sheaf – 7: Tough game for the young lad from Hull City to come in to, but he acquitted himself very well. Looks like a very promising addition to the squad.

Lemonheigh-Evans – 6: Not Connor’s best game; looked a little bit out of sorts in the No 10 role which was quite different when the striker ahead of him is a much smaller one than normally. Set piece delivery wasn’t up to scratch either.

Whitfield – 7.5: Much more threat down our left than there ever was from the other side. Could easily have assisted on a couple of goals had our striker been more alert. Continues to be one of the most astute bits of business Gary Johnson has done since his arrival in 2018.

Nemane – 5.5: I shall explain this mark. Aaron was having one of those days in the first-half, heading for a bruising mark around 4 after an error-strewn ineffective half, but he was much more effective after the break and would have received a 7 on that performance…so I am averaging the score out strictly!

Waters – 6: Hard role to play, up front on his own with little central attacking support for much of his time on the pitch. Worked hard to make a couple of half chances but the efforts were sadly not as effective as they had been at Boreham Wood four days earlier.

Umerah – 4: Cameo to forget for Josh, I am afraid to say. Was very lucky to escape a red card for putting his head in where it shouldn’t have been on Brindley and wasted probably Torquay’s best chance when his shot was actually more of a clearance away from goal. He’ll have better days for sure.

Little – 6: Glad to see him available again; didn’t really have that much of a chance to shine after coming on for Sheaf.

Andrews – 6: Only had a few minutes in place of Warren.

MAN OF THE MATCH

After some low marks for the defensive crew the last time I did a verdict, the MOTM has to go to one of them this time and it is Shaun MacDonald for me. Did not put a foot wrong all game, couple of really good saves from County’s few clear-cut chances, very solid handling from crosses and generally a very good display. Shaun has a very good chance to make the No 1 job his own over the next month or so, while Lucas Covolan is sidelined. Honourable mentions go to Sherring and Cameron, as well as the ever-present attacking threat that is Ben Whitfield.

The usual, with just a couple of personnel changes. 4-2-3-1 with Sheaf in for Hall (who was definitely missed) and Waters performing the lone forward role ahead of Umerah. Nice to see a strong bench, with four outfield players you could have happily brought on at some point to try and change a game. Slightly concerning that we don’t appear to have any fit defenders in reserve (senior ones anyway). 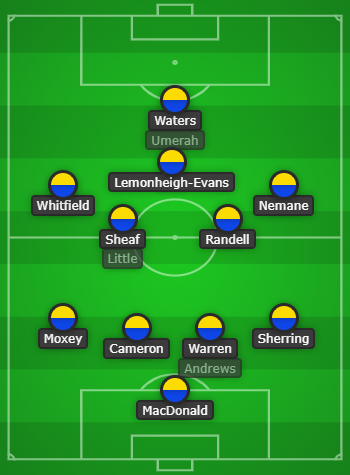 I’m going to go for the non-call in the early minutes. First viewing, Boldewijn’s tackle just looked a little bit late, although I think the Radio Nottingham commentators saying Randell was making too much of it were way off target, as they eventually admitted when they saw the third angle. It was a potential ankle-breaker and, in a VAR world, would surely have been seen as a tackle with the force behind it to be a red card. You would have had to fancy Torquay with 80 minutes against 10-men – we never fail when that happens, do we!!

The Magpies lined up 4-4-2, with debutant Inih Effiong and Wootton up top and danger-man Rodrigues on the right. They are a decent side, up there with the best we have played this season, but neither side was ever really able to get a grip of the game and there were far too many sloppy phases of play from both.

Tom Reeves was over officious, often blowing at the first sign of contact between players, and he managed to miss the two biggest incidents; one for each side. Another referee, assisted by his linespeople, could easily have sent off a couple of players. Strangely we only had two yellow cards though (Cameron and Wootton) and both were well-deserved.

It wasn’t Torquay’s sharpest performance of the season, especially in the final third, but I would have been happy with a point before the game and I am happy with a point after it. Who knows how long the season will continue, but we’ve got to keep on being difficult to beat on our travels and we were today. Few teams will go to Meadow Lane and restrict County to a few chances but we were never really stretched too badly and Shaun MacDonald ably dealt with anything thrown at him. All in all a good result and nine points clear, albeit we could be caught by Sutton, our next opponents, if they win their three games in hand.

Not a bad performance and a decent point to carry us onto Tuesday night, awful discipline from Umerah – GJ will be having a word with him! #tufc

Excellent performance from @shaun_macone today. Decision making was faultless and bailed out his mates on more than one occasion. Goalkeeping relies on confidence and he dominated his penalty area today. Brilliant. Let's back all the lads.

How good was @shaun_macone today?! MOTM for me. Got us out of a couple of potentially sticky situations. #TUFC