‘Tis the season for seven-goal thrillers, and though this Yuletide goal-fest was far less calm and convincing than Boxing Day’s event, it ended in the same result: a victory for the swashbuckling Yellows.

It all started with some lovely interplay between two festively named Gulls. Clementine-Evans played a one-two with Sherrying, before jinking into the box in the inside right channel. The Gulls’ number 7 dug out a lofted ball and Asa Hall’s perfectly-timed run ended with a thumping header. A deserved lead after an early spell of pressure.

Another one-two involving The Lemon led to another goal not long afterwards. This time Umerah was rewarded: he knocked the ball to the Welshman, who returned the favour and found the striker behind Weymouth’s defensive line. The finish into the bottom corner was assured, delicate, clinical.

Just over five minutes later, United’s lead was halved. A well worked counter-attack from the Terras gave them a crossing opportunity on the left. The ball in was too tempting for MacDonald, whose rush out of the goal was misjudged, leaving Cody Cooke an empty goal to finish into.

You’d have been justified – but oh so wrong – in thinking a third Torquay goal would’ve killed the game. The Gulls came flying out of the traps after the half-time break and quickly extended their lead. Randell did brilliantly to regain possession, before setting Whitfield free down the left. His (now completely trademark) low cross was met by Aaron Nemane, who slotted home from 10 yards to score his second goal in as many games.

Weymouth were undeterred, and set forth on another counter-attack within minutes. The sparks were originally stamped out by Moxey and Cameron, blocking a shot from Murray, but the winger followed up and found himself with a better chance in the Yellow box. His attempt snuck between MacDonald’s legs – you’d think he’d be disappointed with that goal as well.

This should’ve been a wake-up call, but it wasn’t. Santos beat Kerr to a delicious cross from the Weymouth right, and the Scot’s clumsy push was deservedly punished with a penalty. Former Gulls Clown, Josh McQuoid, made no mistake from the spot to pull his side level.

Fatigue was beginning to set in, and while both sides saw plenty of the ball in the last half-hour, material chances were few and far between. It felt as if Torquay were trying too hard to pass the ball into the net: their weary legs misplacing the final ball and frustrating me enough to scream at the stream that Adam Randell should have a shot when he received the ball on the edge of the box in the 87th minute.

Instead, for some bloody reason, he passed it. Jake Andrews returned the favour and fed the Argyle loanee who got to the by-line and squared it to Lemonheigh-Evans. Connor poked home from inches away, and proceeded to press his finger to his lips, shhing not just the Weymouth fans, but fools like me who dared doubt the patient, sexy attacking play of Gary Johnson’s table-topping Yellows.

That was to be enough. A late corner drew the opposition goalkeeper into the Torquay box, but it was dealt with decisively and MacDonald took great joy in belting the loose ball into the roof of the stand as the whistle was blown.

Shaun MacDonald 5 – At fault for two goals, I’m afraid. Comfortably his worst outing of the season. I probably wouldn’t drop him, but if you’re going to have two similar-level goalkeepers competing for the number one shirt, you probably can’t justify persisting with one after a howler.

Sam Sherring 7 – Clearly isn’t a right back and was slightly lacking in the final third, but defensively very solid again.

Fraser Kerr 6 – Fine for long periods of time, but had an absolute stinker for the penalty and looked drained of confidence after that.

Kyle Cameron 7 – A decent game. Love it when he drives forward with the ball, looks genuinely threatening.

Dean Moxey 7 – Not as good as he was on Boxing Day, but pretty decent.

Aaron Nemane 8 – Very good. Got another goal. He baffles me a bit because he’s clearly right-footed and plays on the right wing, yet his natural movement is, counter-intuitively, to cut inside. It causes all sorts of trouble at this level.

Adam Randell 7 – Weird one for him today. Thought his general play was quite poor, but he made the winner and was crucial in the third.

Asa Hall 7 – Brilliant goal. Wasn’t at his best today but great to have him back.

Ben Whitfield 8 – Also not at his best, but still came away from the game with an assist and a full back in his pocket. Should be a 7, but gets an extra point for his insanely brilliant celebration, especially on his 50th Torquay appearance.

Connor Lemonheigh-Evans 9 – Man of the match. More below.

Jake Andrews 7 – Only played about fifteen minutes but was instrumental in the winner, and probably deserves about a 17 for brazenly pretending to have pulled his hammy in celebration and wasting a bit more time.

Gary Warren 7 – Looked assured for ten minutes or so.

Matt Buse N/A – Gary was very late to get on the Buse.

The hammy is fine 😁 Character from the boys unreal 👏🏻 Sherringham and Shearer throwback from 6 years ago 😅 @connorevans1 https://t.co/BPifver3gX

Do you agree with these ratings? Have your own say on our polls by clicking this link!

Man Of The Match: Connor Lemonheigh-Evans

Every week I think a different one of our players is the best player in the league (and would be in the one above, too). Today it’s the Lemon, who was absolutely superb today. Two brilliant assists and a goal are pretty much all you can ask for from an attacking midfielder, and even when cleverly employed as what can loosely be described as a “false nine” he performed excellently. Also huge huge respect for the shhhing.

Today was a massive day for Josh Umerah. With our usual marksman out injured, Umerah had to impress or you’d expect Gary would waste no time dipping into the loan market (perhaps after a lethal mackem from his boy). He may well still. But Umerah did most things right today. He’s clearly not got the experience or nous of Danny Wright, but he took his best chance brilliantly and his hold-up play was the best it’s been to date, and at the time I thought he was unfortunate to be subbed off. It’s important to remember that he’s in the squad as a backup centre forward. Don’t expect him to be as good as Wright because he isn’t: otherwise he’d be first choice! He’s young, talented, and learning. He did pretty well today, and deserves praise for that.

The 4-4-1-1 shape we’ve now all become accustomed to, with Lemonheigh-Evans probing beyond the target man. Hall’s return was timely as he came in for the injured Little, while Kerr replaced the elderly Warren. Felt bizarre to take our only striker off and bring on a midfielder, but he’d tell you with his tongue firmly in his cheek that Connor is brilliantly suited to the false nine role.

Weymouth huffed and puffed a lot today, but were realistically only afforded three chances because of three defensive errors. Certainly not the worst team we’ve seen, and I wouldn’t be surprised if they stay up, but they were regularly blown apart by our intricate attacking play.

A word to the coverage, which was broadly decent. Absolutely no interest in frills, but the commentary was probably the most informed, descriptive and even-handed I’ve heard. I particularly enjoyed his attempt to square the pronunciation circle by saying “Asa” in two different ways, “Nemane” in three, and “Umerah” in at least four.

Only big decision was the pen, which he got right. The fans gave him healthy criticism, but I thought he did alright and even correctly identified the wrestling of Josh Umerah as a foul or two – something his colleagues could learn from!

At half time, I thought this report would have to feature a significant amount of Wind Chat. It was certainly blustery at the Bob Lucas “Stadium”, and that definitely affected both teams’ play, but pleasingly there were enough goals to mean I didn’t have to wheel out my tiresome sprout-based gags.

We made hard work of it today – all of Weymouth’s goals came from Torquay error – but our ability to still grind out a result makes it arguably more impressive than the rambunctious Yeovil win.

They’ll need a good rest this week, and perhaps a dip into the loan market wouldn’t go amiss to cover those weary legs and inevitable injuries as we tumble into the New Year. For now, though, there’s plenty of reasons for merriment: we’re top of the league, we’ve got an 11 (eleven) point lead, and all of our players are bloody ace.

50th TUFC appearance, 3 points, another assist and a @connorevans1 winner🤩👏🏼💛 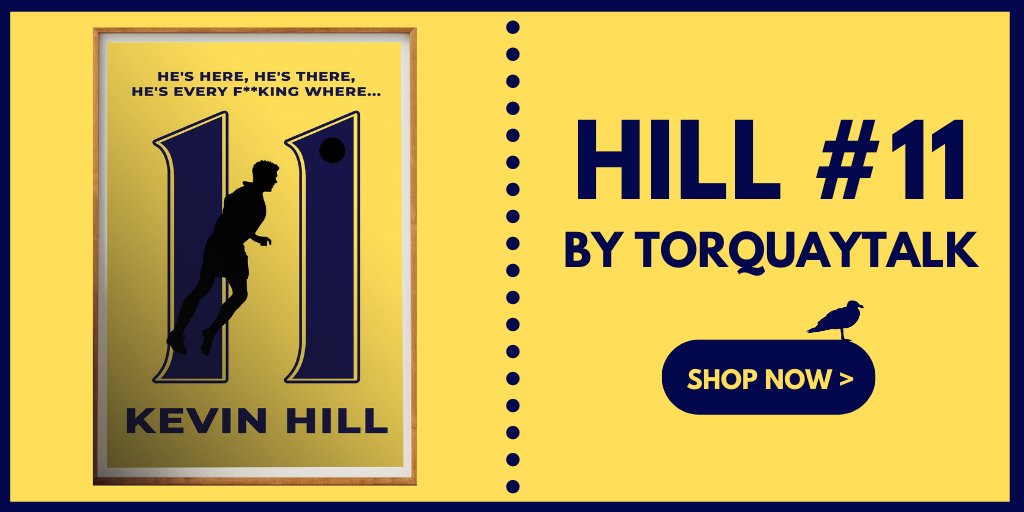