TT PLAYER OF THE MONTH

It had to be Cam! As we approached pre-season it was about seeing how the class of 19-20 would progress into a second National League campaign, and Kyle came out of the traps flying. A goal against Hemel Hempstead showed his intent, and he has not looked back since. One commanding performance after another followed, as 20-21 finally got under way. Cameron looks so assured in defence and has also strode forward to cause havoc for opposition defences. Of course the highlight was two headed finishes to take the spoils against Dover, but there was also a vital goal-line clearance versus Stockport, an imposing game at Bromley and a dominant display at Hartlepool. United have had a great history of cracking centre halves, in this form Kyle might just join them.

Energizer Benny! Okay I’m better leaving the puns to Hayward (snr or jnr), but that phrase nicely sums up Whits. Ben didn’t quite click into gear against Stockport and Eastleigh, but impressed back on the wing at Bromley and hasn’t looked back since. Against Chesterfield he was a blur of motion, stretching their defence time after time and creating an opener for Louis Britton, and versus Dover it was a similar story. The only thing lacking was goals. Enter Aldershot (a) and a strike from outside the box that was simply un-saveable in the second half, a moment of beauty that Whit’s performances deserved. As is so often the case, one goal was soon followed by a repeat last weekend – another superb performance, including a left foot cross on a plate for Danny to grab his hat trick. Super stuff.

I’ve been saying for a few years that youth prospects from our Devon rivals should be recruited more frequently, and if they have the sort of quality Adam possesses then the more the merrier. The midfielder has slotted into the Torquay squad like a seasoned veteran, properly announcing his arrival at Bromley with a rasping 20 yarder that set the Gulls on the way to victory. He followed this up with two fine performances against Chesterfield and Dover, before a wonderful display at Hartlepool. Adam’s attitude has impressed me almost as much as his skills. Determined to get on the front foot and win possession – he’s highly motivated to make an impact. Now happily signed on until January, I can’t wait to see more of Randell and through balls like that opener on Saturday – he made that look easy.

Much like Adam, Sam Sherring has fitted in perfectly at Plainmoor. His partnership with Kyle Cameron has given us a sound base to build on at the back, and part of the reason for our brilliant start to the season. Sam’s performances are actually quite low key in comparison to Cam as he gets on about his business quietly, but the defender has barely put a wrong in eight impressive games. No disrespect to Gary Warren, but having a pacier centre back like Sam allows us to be more aggressive and push further up the pitch – let’s hope his loan spell is a long one.

Ben Wynter is one of the most consistent performers United have had in years. The defender has added another string to his bow this season, with appearances as a centre back in a defensive 3 showing his versatility. However, Ben is definitely best suited his usual right back role and his aggressive running has caused all sorts of problems for defences. Wynts has also enjoyed a flourishing understanding with Aaron Nemane and I doubt there are any better right backs in the league. Oh and that headed assist last weekend was a moment of class wasn’t it. 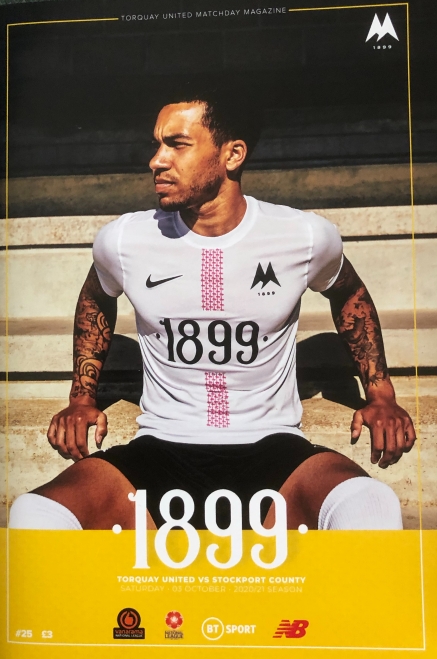 The Lemon is back! With his injury problems seemingly behind him, Connor LE is bringing back the sparkle we saw in 2018-19 and really enjoying his football again. He was the best player on the pitch for me versus Chesterfield, whilst at Victoria Park the backheel to Whits was a lovely moment of imagination that encapsulated the confidence of this Gulls team. The 3 of Hall, CLE and Randell provide a lovely balance, add to that the returning Armani Little and the engine room looks very strong indeed.

Now Asa has not started every match and his minutes are not amongst the highest…but he is simply one of our most important players. Aldershot (A) was a scrappy and imbalanced performance from the Gulls, enter Asa at half time and a change in the game’s direction. Hall sits in the midfield, directs United traffic, picks up pieces and allows midfield maestros like Randell and CLE the chance to impose themselves. His minutes will be managed as the season goes on, keeping him fit could be key.

As the season came to life Danny Wright initially found it difficult to get going in a yellow shirt…but now can’t stop scoring! He has been partnered with both Britton and Umerah, but neither link-up seemed natural – instead it’s leading the line on his own that appears to suit Danny best. He is playing off the shoulder of defenders and showing all his experience, with some clinical finishes against Shots and Hartlepool proving that the veteran has plenty left in the tank. Lovely smile as well.

Aaron Nemane has divided supporters somewhat during his time at Plainmoor, with his end product often criticised by Dave Thomas on the Plainmoor streams. That is a fair comment from DT, but I’d prefer to focus on what Aaron is doing right and that is an awful lot. His work ethic is excellent, he tracks runs and makes tackles, then in attack he is direct and positive. In terms of pure quality and x-factor he is not Kalvin Kalala, but as a team player he has a lot more heart for the battle. Well done Aaron.

Covolan started the season on fire at home against Stockport and kept the Gulls in the game with a number of excellent stops. Since then Lucas has been a very calm presence in goal, benefitting from the form of the lads in front of him, but also showing a level of concentration that was sometimes lacking last season. A mighty fine month for the Brazilian.

Check out the below:

We are delighted to be working alongside @TorbayFood and are excited to be raffling off a match worn, signed @Kylecam97 2019/20 away shirt! Tickets cost £5, and will be drawn on 2nd December. Please follow this link, every £5 you donate gets you a ticket https://t.co/Snlg4EFqUi