Lifelong supporter Tony McHale looks back at his time supporting the Gulls, starting with the exciting 1950s and 60s

Tony – I first attended Plainmoor in 1954 as a 10 year-old.  In those far off days we played in a black and white strip. The player manager was Eric Webber who was to go on to manage the club for over 14 years. I cannot remember much about the game or who the opposition was but I do remember clearly that on the pitch Eric Webber was a commanding presence in the Number 5 shirt.

My second match was a famous one. After beating the great Leeds United 4–0 in an FA Cup Third Round replay earlier in the month on Saturday 29 January 1955, we played Huddersfield Town in the 4th round before a record crowd of 21,908. Although we lost 1–0 it was a very exciting day and I have been hooked ever since.

As I reached my teenage years I came to know the players well and there was a fantastic atmosphere as it was not unusual for the gates to be eight or nine thousand.  The formation was always the same 2–3–5. The players I remember best from that era in the 50`s were Colin Bettany (335 games) Denis Lewis (473) Ronnie Shaw (412) Sammy Collins (380) Tommy Northcott (441) and Don Mills (367). Sammy Collins still holds the clubs scoring record with 219 goals which included 8 football league hat-tricks.

It is interesting that only 4 players have scored over 100 goals for United and they all played during this era.  They were Sammy Collins, Tommy Northcott, Robin Stubbs and Ronnie Shaw.

The first photo that I have found is taken by Wilson Gould of Torquay’s 1956/57 squad. I can remember every player by name except one. Does anyone know who the guy is in the back row far right? 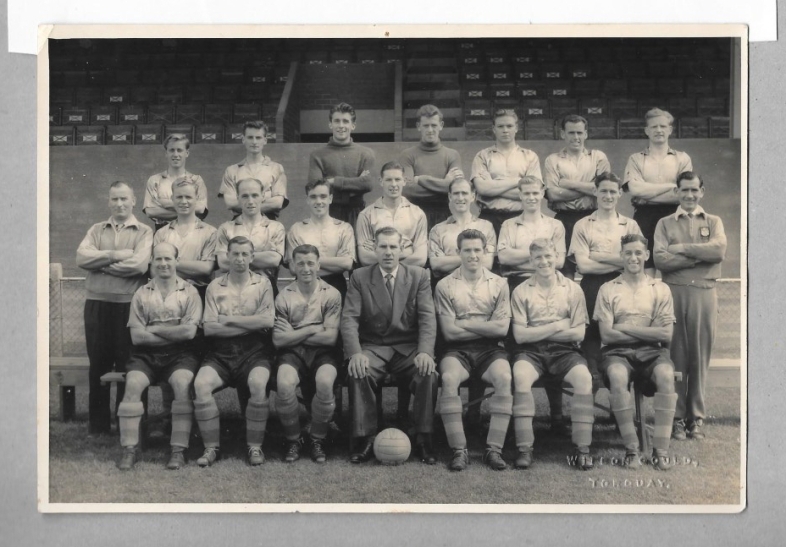 My biggest disappointment in this era was drawing 1–1 at Selhurst Park in the final game of 56/57  season and thus missing out on promotion to Division 2 on goal average for the first time in our history.

I twice played at Plainmoor in Youth Cup Finals for Coombe Pafford managed by Mr Crispin and Mr Sweet. Here we are at Plainmoor, second photo, circa 1960, with Dave Maule holding the ball flanked by Mike Boxall and Dave Street, with myself front row far left. The goalkeeper is Peter Herbert. Does anyone recognise themselves in this old photo? Do let us know. 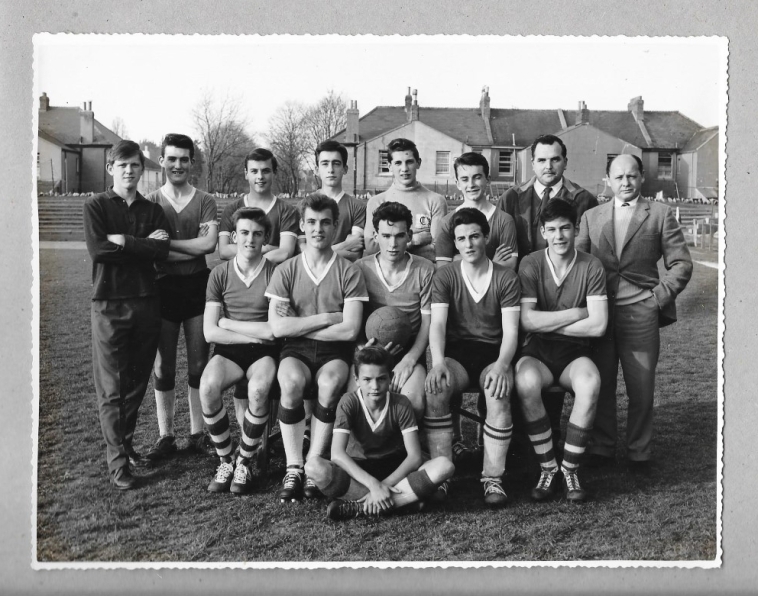 When the Football League was restructured in 1958 United were put in Division 4 but were promoted to Division 3 in 1960 and in the next 12 years were to spend 8 seasons in Division 3.

This was the era where United frequently played on a Saturday evening, which was great for all the local South Devon League amateur footballers who could go to the match after playing on a Saturday afternoon.

1963 saw the arrival of Robin Stubbs at Plainmoor and you soon knew he was special when he scored 5 goals against Newport County in an 8–3 win on 19th October 1963. I was at this match in the Babbacombe end and it just seemed like it was raining goals!

Stubbs was to light up the stadium during the 60`s with his goal scoring exploits which saw him net 133 goals and in a 6 year period he was the club’s leading scorer, with the exception of 1965/66 when Tommy Spratt netted 18 times. Also our right back John Benson was a big favourite of mine when he arrived from Manchester City in 1964.

On 9th January 1965 I witnessed probably the most exciting match as a United fan when we took on the might of Tottenham Hotspur in an epic encounter, which many older fans will remember to this day. The match ending in a 3 -3 draw with Robin Stubbs scoring twice in the final five minutes. This game had everything as our team competed against a side for whom every single player was a full international.  The gate was just over 20,000.

I particularly remember travelling to White Hart Lane for the replay only to discover when 10 minutes from the ground that due to a cloudburst the match was off. We had to travel home to Devon on the train only to return the following week to be hammered by the mighty Spurs 5-1.

In May 1965 Eric Webber was sacked and replaced by Frank O’Farrell, who would go on to manage the club in 177 games during a near four year period which saw the club never finish outside the top seven and play some scintillating football.

1966 was an epic year for football. United were promoted to Division 3 finishing third in Frank O’Farrell`s first season. England won the World Cup at Wembley. I was there on that never to be forgotten day.  It was an important year for me personally as I met my wife to be at The Linney in Coffinswell.

In 1966/67 Frank O’Farrell recruited John Bond and Ken Brown from West Ham United and we finished seventh. Bond was a real entertainer and loved engaging with the crowd.

1967/68 was special as United appeared on Match of the Day for the first time beating Bury 3 – 0 in front of 10,000 fans at Plainmoor. It was that season that saw United fans voted `Best Behaved Fans in the League. 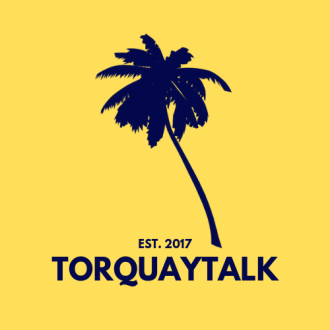