Thomas Kelly blogs about his recent return to football

On March 7th 2020, I along with a couple of hundred Torquay fans travelled to Sutton United for a National League fixture. The impact of Covid 19 was beginning to take shape across rapidly across the globe, however even most people there probably didn’t expect this to be the final game of the 2019-2020 season for the NL. I remember speculation from supporters whether games would be played behind closed doors to complete the season to null and void.

As we all know, Torquay lost 2-0 in a very disappointing performance and to date this looks like it will be my last Torquay game for a while, maybe even for this year. I haven’t been to Plainmoor for a home game at all this year and sadly it looks like i won’t unless the potential guidance for spectators increases.

Being based in West Sussex & working in the aviation industry, getting to games can be very tricky for me. Weekends in my industry don’t really exist, in fact a weekend for me could be a Wednesday-Thursday one week and Monday Tuesday the next. I rely on a lot of London/Southern based games if my roster allows it and although I do get the occasional weekend off, my trips to Plainmoor can be few and far between.

For anyone wondering, I’ve always been based in West Sussex, my roots to Torquay stem from my grandparents who lived in Newton Abbot who took me to my first game back in 2001 and during school holidays, my family would travel down to our holiday home in Chudleigh where I would be able to attend games at Plainmoor and here I still am all those years later.

If I can’t make a Torquay game, I try and look a bit closer to home to get my footy fix. With the news that certain clubs from step 3 & below could begin to welcome fans back into their grounds, 168 days from my last live football match, I took the opportunity to finally watch a game of football in person at one of my local non league clubs, East Preston FC.

How would the experience be different compared to pre-covid? Would I enjoy being back watching live football that isn’t TUFC related? Let’s find out!

Located near the south coast between Littlehampton & Goring lies the village of East Preston, the place I grew up as a child.

East Preston currently play in the Southern Combination Premier League, the highest level for County Football. Before null and void, it was a season of struggle as they were lying in 17th place, just above the relegation zone. The club have had success in the past, winning the division back in 2014. The club’s best efforts in cup competition include a 5th Round appearance in the FA Vase in 2014 and a 3rd Qualifying Round defeat to Billericay in the FA Cup in 2004 which resulted in the clubs highest attendance (of which I attended) of 488.

It’s a club that I’ve always enjoyed to visit in the past. Many a time I’ve had one headphone in listening to the Gulls radio commentary, whilst watching the game and most times I end up feeling better for not attending the Torquay one!

Entry to the game cost £5 (cash only) & the game was limited to 150 spectators (average crowds normally under 100) which also included a game between the clubs U-23 sides. Entering the ground, the first difference is to write down your name, address and phone number for the track and trace requirements. Hand sanitiser is provided and you are issued a programme for free.

Other than that, things were roughly the same as previous visits. Being alone I took a seat in the 100 seated stand and for the most part I was distant enough from other supporters, although nothing was roped off in the stand and I could choose any seat available. Groups of supporters were able to sit/stand together if they wanted, although most spectators did do their best to maintain distancing from other people not in a group.

Food and drink were available although I didn’t get any. Supporters were able to take beer from the clubhouse into the ground and mugs were provided for those looking for tea or coffee. This has been a normal practise at the club for many years although it did surprise me that they didn’t have disposable cups available considering the current circumstances.

The other major change was the half time team talks happened on the pitch rather than in the dressing rooms. I don’t know if this is just a temporary thing until the new season starts, but I did wonder about the scenes of teams doing their team talks in the freezing rain in winter!

As for the game, it was attended by about 60-70 spectators, a strong wind affected much of the play. East Preston having the better of the first half and Hamble the second. The visitors, playing in the Wessex Premier League (hello Lymington Town!) took the lead not long into the second half before EP turned the game around, winning the game with a lovely free kick that went in off the post.

It was a good game to get back into the swing of things, at that level, atmosphere is always going to be quiet, although I must admit I did crack a smile when some of the players began to disagree with some of the referee’s decisions in true footballer style. Let’s just say the F word was used a few times. The referee for the game was very vocal and it was interesting to hear him describe his decision making for fouls. Something you wouldn’t normally get to hear on the Popside!

My visits to the Lashmar are always pleasant ones. I believe East Preston have one of the better set ups than most of the other clubs at this level and the support for the size of the village is actually quite good. It’s not quite a Saturday afternoon at Plainmoor, but it’s a good alternative for me if I can’t make a game. Based on the performance I saw, I think they will have a much better season this time around.

During lockdown, my daily walks would often take me past the Sportsfield Ground, home of Littlehampton Town FC. The Golds and their opponents both ended their seasons in 1st place, however due to the null and void of their respective divisions, both clubs will start the new season in the same league they topped last season. (Southern Combination Division One/Isthmian League South East Division).

Entry to this game was £5, again cash only, (£4 if booked online) and limited to just 150 spectators, although most games would easily be under that number anyway. Like the East Preston game, I estimate that there were around 60-70 spectators there, with the majority from Hastings United. 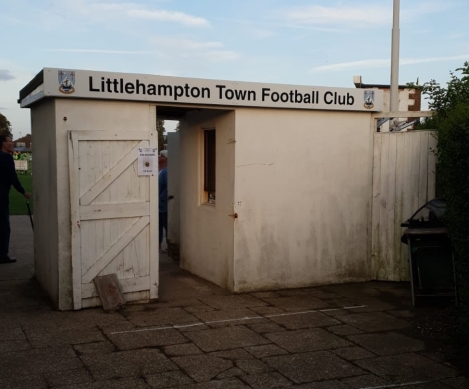 After paying my entrance fee, I was surprised to have my temperature tested by a member of staff from the club. A case of better to be safe than sorry perhaps, however considering the ground is shared next to the cricket club, there was ample space for everyone there to be socially distant & it’s an outside venue, it did seem a bit weird.

After filling out the now common track and trace form, I headed to grab some food and I must say Littlehampton knocked it out of the park. Speaking to the people running the food & drink area, I got talked into trying their burger and boy it was fantastic. Home made in a brioche bun and for £3 it was brilliant value. Best burger at any ground I’ve visited and a view taken by many other fans as well.

Prior to kick off, I headed upstairs to the clubhouse for my first pre-match lockdown pint of cider, which hampering back to our NLS days, I took with me pitch-side in time for kick-off. At no point was I asked or suggested to wear a face covering inside the clubhouse.

Hastings United took an early 2-0 lead, one headed in from a cross & capitalising from a defensive mistake. A vocal contingent (with a drum!!) provided a decent atmosphere, although I’m sure the local neighbours would say otherwise! It was nice to see people enjoying being back with friends at the football supporting their team. To me, I’ve learnt after watching the soulless Premier League games on TV that being with friends at Torquay games provides about 90% of the enjoyment for me. It’s the banter, pre-match pints and just having fun, especially when the results go the wrong way. With reduced crowds for the future and the potential for watering down on crowd noise, if I am lucky enough to be able to attend a Torquay game in the near future, I hope I can still enjoy the experience as I did pre-lockdown.

Despite the two division gap, Littlehampton created chances and never stopped running. A goal early in the second half killed the game as a contest, but there could have quite easily been more goals for both sides. It was a lot easier for fans to be socially distant here with the added space of a cricket pitch behind the football pitch and overall, it was another pleasant match day experience. I wish both teams well for the upcoming campaigns.

In summary, apart from track and trace (which I expect to be the norm for a while) and the unusual temperature check, football at Step 5 & 6 appears to be business as normal. Obviously, there will be challenges for larger clubs further up the pyramid, although I do hope that clubs further down the pyramid do benefit from potentially gaining fans of other larger clubs looking for football in the flesh. Even with maximum crowds of 150, most clubs would bite your hand off if there were to get close to that number. I must add at no point did I feel unsafe during my two fixtures I attended, and both clubs are doing their very best to maintain a safe match day experience.

As for Torquay, I really hope that I will be able to attend a game again soon. We all know the experience will be very different for the foreseeable future and I’m sure many fans will be left disappointed about not being able to attend games, especially away games which seem like a no-go at the current moment.

I hope that things improve for everyone that soon things get back to some sort of normality. Torquay will always be my club, however if you can’t get to a game, go support your local clubs, they will appreciate your custom and you’ll be able to get some kind of football fix.

One thought on “TT Blog – Back to Footie by Thomas Kelly”