I’ve never spoken to Mark Loram. I don’t know for sure if any of the stories about him are true. I am also one of the few people of my age in South Devon who never played football against him (this is largely because I pretty much gave up on any sort of sporting career after my first two outings for the 25th Torbay Cubs ended in heavy defeats). I am, therefore, a completely unreliable witness.

I would, however, like to share with you a couple of personal memories and perhaps the odd apocryphal tale which may give you an idea about why “Lors” is remembered so fondly by us Gulls with grey around the beak.

All of my mates at school were better footballers than me. In their early teens and the early 80s most of them played for an outfit called Preston Wanderers. They did ok, and I would normally tag along on a Sunday morning to watch them. As Under 14s (I think) they got into a cup final, which was played one bright May evening on a then-traditionally-threadbare Plainmoor pitch.

Unfortunately, as we all knew, the runners up medals had been engraved weeks before because our opponents were Brixham Grasshoppers. Nobody ever beat them. They were just better, quicker and stronger. They had won the league by a mile. I was proud of my mates that night. They fought like tigers and did have some chances but it finished 2-0 to “Brix”. I was in the old Grandstand sitting next to my best mate’s Dad, and as the lads trooped off at the end he said to me: “We had no chance there: some of those lads can hit the ball like professionals”. He’d been a good player in his day, had Brian, semi-pro in the Isthmian League I think, and he was spot on. Starring for “Brix” had been the one, the only, the future professional Mark Loram.

Fast forward about 7 years, and there was another “final” with a plucky South Devon side up against illustrious opponents who knew perfectly well that they only needed to turn up to win.

I refer, of course, to Molineux, and the Southern Final (Second Leg) of the Sherpa Van Trophy in 1989. An attention-grabbing paragraph if ever there was one!

Having spent the decade plunging down the leagues, letting their own ground go to wrack and ruin and then creating havoc in places like Scarborough and Torquay, Wolves fans finally had a team to be proud of. They had pinched a young Steve Bull from West Brom and he terrorised the lower leagues, scoring goals for fun as they piled up the points and the winners’ medals: so good was he that he was picked for England the summer after he and they had stormed the old Third Division.

The mighty Wolves only actually needed a draw against little old Torquay, Bully having sickened us with a couple of late goals in the first leg to come from behind and give us about as much chance of getting to Wembley as me and Gary Johnson being asked to go on Love Island, coupling up and being rewarded with our own cookery show. This bit, I know, is true: WOLVES HAD ALREADY PRINTED THEIR WEMBLEY T-SHIRTS.

Well of course, Lors had other ideas. We nicked an early goal and then, when their ‘keeper was just sorting his wall out, Lors curled in a second with a free kick that would have graced a far higher level. Get in! It was a pinch-me moment on a pinch-me sort of a night. The mighty Whites (check the video) held onto that beautiful two goal lead, Cyril took us to Wembley and I think most of the T Shirts were cut up for dusters.

He could do that, you see. That young lad from Brixham had a wand of a left foot and the sort of close control that would wind up right backs all day long. He was, of course, too good for us. But either Lors never realised that or, perhaps more likely, he knew that he’d struggle away from what he knew.

As a teenager he and Mario Walsh had led the Torquay kids on a fantastic Youth Cup run, getting through several rounds before losing to Portsmouth in what I think was a second replay (remember them?) where Pompey had to knock Mario out before finally winning 6-3 at Fratton Park. The game under the lights at “TQ1” (why do some people insist on calling it that?) had attracted about 1500 people: that was more than we were getting on a Saturday during some dark, dark days under FA Cup winner, second hand car salesman and alleged Swan Vestas enthusiast Dave Webb. It was clear that we had a starlet on our hands, and he went quickly into the first team.

Nowadays QPR are a fairly underwhelming Championship team, but back in 1986 they were a well-established top division club and they snapped Mark up. He made a great early impression and their manager Jim Smith had decided to get him into the First Team (aged 19): “Because he’s been taking the piss in the reserves”. Legend has it that the relationship soured a little when Lors- named on the bench for a game at Loftus Road – asked ‘The Bald Eagle’ if he could leave early: “Because if I catch the 5 o’clock from Paddington I can be in Brixham for last orders”. Mark didn’t settle in London. He was lonely. He missed his mates and unfortunately he left Rangers without ever making a debut.

I may be going out on a limb a little bit here, but there seem to be some parallels between Lors and that other Westcountry hero Marcus Trescothick.

Marcus has written movingly about his struggles with depression and anxiety, which curtailed his wonderful international career and saw him play for another dozen years at Somerset: the local club where he felt most comfortable and where he was loved unconditionally. I think Lors might admit to a similar thought-process. He wasn’t cut out for fame and fortune. He loved a beer and a night out, and didn’t always know when he’d had too many. There are a million hard-luck stories out there: lads who had all the ability but couldn’t quite cope with or commit to the demands and disciplines of top level sport. Lors probably had a good career in spite of his off-field antics, rather than because of them. He was good enough to star in good, bad & indifferent Torquay teams for over 250 games even though for much of that time he was an undiagnosed Type 1 diabetic.

Others have written about this before, but I too was one of those hungover Yellows at Orient on New Year’s Day 1988. Through the haze we were lucky enough to watch what might just have been Mark’s finest hour. Having set his old mucker Dave Caldwell up for 2 goals to silence the Eastenders, Lors proceeded to spend the last 10 minutes taking the ball to the corner flag holding off clogging opponents, winning free kicks & throws in what some of our coarser correspondents might rightly describe as shithousery of a quite devastating calibre.

I think something that gives you a real idea of the man is that even at an age when those of us that played the game had long-since given up, he was still turning out on a Saturday for the likes of Upton and Dartmouth. Even then, in his forties, they just couldn’t get it off him.

Mark: it was a pleasure. Thank you. 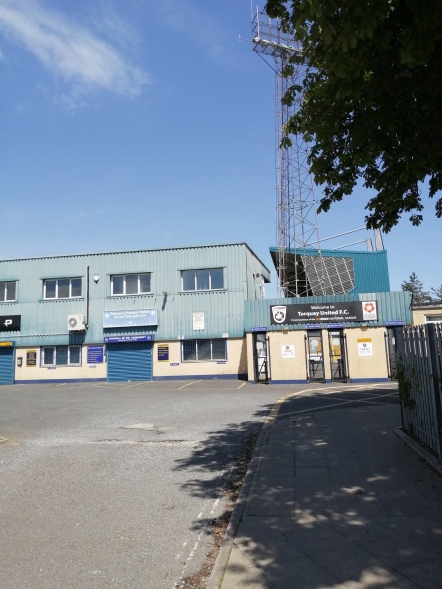