When you think of Torquay United, what’s the first thing that comes to mind? Helen Chamberlain? Bryn the police dog? Barnet away 2001? Champions of the South? Best team in Devon? All very worthy contenders, however one thing that maybe doesn’t come to mind is “a mid-table side”.

The 2019/2020 season may have ended abruptly for obvious reasons, however it’s a season that saw Torquay finish in 14th place (13th before PPG), right amongst the mid-table of the National League.

A season that started with such promise of a potential top 7 finish, but ended up fizzling out into a period of inconsistency. Although we still had an outside chance of finishing in the play-off zone, we never looked like we would hit form at the right time to put ourselves in the picture. The goals of Jamie Reid (missing you) proved Torquay had a serious forward presence early on in the campaign, however you always felt that our defence were never that comfortable to keep a clean sheet when we really needed one.

Ultimately Jamie never really hit the same heights as earlier in the season, our reliance on him for goals and a string of poor performances ultimately led to the Gulls falling from a potential play-off spot to the middle part of the table. That being said, I think most supporters would have taken a mid-table finish this season. A year of consolidation is never a bad thing especially after winning the NLS last season.

I know everyone has different interpretations of what constitutes a mid-table finish, so for arguments sake I will look the times the Gulls finished 11th-14th in the table and it’s definitely not something we do very often, at least in our recent history. Here’s three of our mid-table exploits.

After a disastrous season the year before, to date our last appearance in the Football League (we’re on our way!), Torquay United began life back in the top flight of non-league with Wembley goalscorer Chris Hargreaves in charge. After a dreadful 3-1 defeat at Gateshead on the opening day, the Gulls went on a ten game unbeaten run, winning six games in a row, keeping clean sheets in five of those games.

A quick return to the Football League? Hold on, this is Torquay United. A 4-3 defeat at AFC Telford (where Aaron Downes was sent off for a slightly mistimed challenge….) saw the Gulls lose six of the next seven matches.

In a way the 14/15 season echoed a lot of the Gulls 2019/20 campaign, starting well then just fading away into a period of inconsistent results and ultimately a mediocre finish.

The Gulls did have a good run in the FA Trophy, making it to the semi-finals before a extremely disappointing defeat at home to Wrexham ended the Gulls dream of a trip to Wembley and in reality ended our season there and then. We were too far from the play-off picture and safe enough from being considered relegation candidates. To date it is our best finish in the National League since our return, here’s hoping next season we can do a little bit better than that!

Arguably you would have to look back another 20 years to find the Gulls next mid-table finish, this time in Division 3. The Gulls had made the play-offs the season before, infamously losing to Preston North End on the plastic pitch after throwing away a 2-0 1st leg lead.

Managed by Dean O’ Riordan, Torquay started the season in good form, winning four of the first six games, including knocking Cardiff City out of the League Cup 4-3 on aggregate.

After beating Fulham 2-1 at the beginning of September, Torquay went on a horrible run (see the pattern emerging?), with a nine game winless streak, the Gulls not winning again until mid-October in a 2-1 home win over Mansfield.

Torquay went unbeaten again in November but drew four of the five games they played. From Jan 21st through to April 1st, Torquay won just two games out of twelve, before going unbeaten until the end of the season, but like November drawing more games than winning.

Just before my time this, but one that will stay long in the memory of Torquay fans supporting the club at the time. Torquay United finished 14th in the 88/89 season, but that season it was more about the Gulls fantastic run in the Sherpa Van’s Trophy than it was about finishing mid-table. Cyril’s team overcoming the odds at Molineux to make it to Wembley for the first time in the club’s history.

Unlike the other seasons, Torquay started the season in poor form, losing the first four games (including League Cup) before winning the next three.

Torquay hit some decent spells from late October into November and went through December unbeaten all the way to the new year, winning five and drawing twice. After a 2-2 draw with Grimsby Town on 14th January, Torquay didn’t draw a game of football again until 27th March, winning seven and losing six. 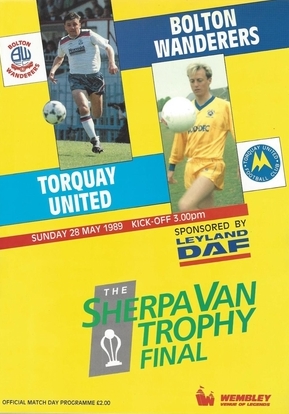 At the end of March, Torquay had gone five games unbeaten but after that the Gulls won just three matches (including the win at Wolves) and that form saw the Gulls finish in 14th place but with a trip to Wembley confirmed. The result didn’t really matter in the end, 3rd Division Bolton Wanderers came back from Dean Edward’s opener to win the Sherpa Van Trophy 4-1 in front of 46,513 supporters. For Torquay, it would only take two years before the club got their first Wembley success (thanking you Dave Bamber!).

I don’t think there are many lower league clubs who can say that they have quite a record of either fighting towards the top or fighting the drop like the Gulls. You hear it a lot, if you want a relaxed life, don’t be a Torquay United supporter!! Even the season just gone, we still had an outside shot of becoming play-off contenders and despite the season being cut short, I don’t think most can complain at where we have finished.

As I said at the beginning of this article, I think most of us would have taken mid-table obscurity before a ball was kicked. As long as next season we can push on and improve, I think I can forgo our next mid-table finish for another 20 years!!

One thought on “TUFC Mid-Table Mediocrity by Thomas Kelly”