Fate, it seems, is not without a sense of irony. The one time in modern history that Torquay United seemed destined for mid-table mediocrity, a global pandemic wrestled it away from us.

Typically, we have tried our damndest to make even an average season unconventional. It was a story of polar opposites, incomprehensible injuries and flashes of what this squad may be able to deliver consistently with time.

In a bid for some sort of 19/20 closure, we approached the TT team to vote on a collection of awards. This was completed before the publication of the retained list, which I hope adds some validity to the selections.

With thanks to the TT Contributing team:

TT Award One – Player of the Season:

MH: Jamie Reid. Obviously. He’s nearly won two consecutive golden boots, and yet if you look at his goal record you don’t even scratch the surface of his talents. His hold up play is superb, his feet are exceptional and you only have to look at that ball for Keating’s goal against Woking to know he’s not a bad passer of the ball either. There were some at the end of last season who doubted his ability to make the step up to the National League, and I’m beyond thrilled to see him prove them wrong.

KS: Proved he can do it in the national league. Gone from strength to strength under Gary Johnson. Where would we be without those goals.

DR: Jamie Reid – Proved himself more than up to the NL challenge and when he struggled with an injury our season derailed.

SJ: Jamie Reid. Managed to keep his fantastic form in a higher league and showed that he can score goals at the conference. Will be gobsmacked if we keep him.

SD: Ben Wynter. Once again Ben has been absolutely outstanding for the Gulls. He’s one of the best right backs we have had in recent years, solid in defence and outstanding going forward with a brilliant delivery.

RH: Joe Lewis. Struggled to get in the side to begin with but absolutely essential in whatever position he was asked to play.

SJ: Ben Wynter. He’s already League level in my view and wouldn’t be surprised to see him leave to a League 2 club into he summer. Forget hes so young sometimes.

RE: Reid vs Aldershot. That touch, that finish. All on the BT cameras. Just showing off

MH: Reidy against Aldershot (h). There have been some screamers this season (Little at Barnet, a couple from Kalala) and Reidy could mount a few challenges with his own strikes, but this goal was absolutely sensational. The audacity to even attempt a sort of aerial Cruyff turn is ridiculous, but to pull that off and then slam the ball home from range is just obscene. Unreal bit of football.

MR: We’ve been treated to some corkers this season but the best I saw was on a scorching hot August bank holiday at The Hive. Jean Yves Koue-Niate shinned it into the back of the net with real vigour and style in the opening minutes. Just kidding, Little’s goal from the right hand edge of the box wouldn’t have looked out of place at the highest tier. He guided it into the top corner and keeper at full stretch had no chance. It seemed to hang in the air for ages and you knew from the moment Little hit it that it’d end up in the back of the net.

BC: TUFC 4-1 Woking. A hard fought and morale boosting win after a truly abysmal run of results, extra sweet as against dirty Woking.

RM: Woking (h) after 7 defeats, the Yeovil massacre, poor form, this game restored some faith and stopped the rot.

JU: Woking at home, on one of the worst runs I can remember as a Torquay fan, and fresh from the humiliation in the rain at Yeovil, I feared the worst against our old Rival’s Woking.

MR: Nothing comes close to Stockport away. The town was even more dull and dreary than ever as the rain hammered down on that Saturday. Didn’t dampen my spirits though as we trounced the opposition in one of the most comfortable performances I’ve ever seen from a United side. Stockport never looked like scoring and we could’ve had more. This was also the best I’ve seen Kalala play, he danced round the defenders like they were cones. Combined with writing the match report and a night out in Manchester, it was a great weekend.

JJ: Halifax (a) Just a brilliant away day. Best perfofmance of season to top it off.

SD: Halifax. Quite simply I thought we would win the league when we walked out of the Shay. To a man we were outstanding, vintage Gary Johnson performance. Despite missing key players (Little and Hall to name a couple) we still outplayed them from start to finish.

MH: Really enjoyed Woking (h), Stockport (a) and Fylde (a), but I’d have to go for Halifax (a). To be honest, I confuse Stockport (a) and Halifax (a). Both were wet, against teams in blue, and we battered them both. But I think Halifax was the better. It had everything. A great boozer down the hill from the ground, three goals (including a stunner from the shagger), and an all round battering of a team who were supposed to be decent. Truly thought we’d win the league after that win.

CH: Stockport (a). Haven’t often seen us that good on the break. A marvelous day out with my son too.

MA: Notts County – good day out and nice to go to a proper ground, football wasn’t so great though. 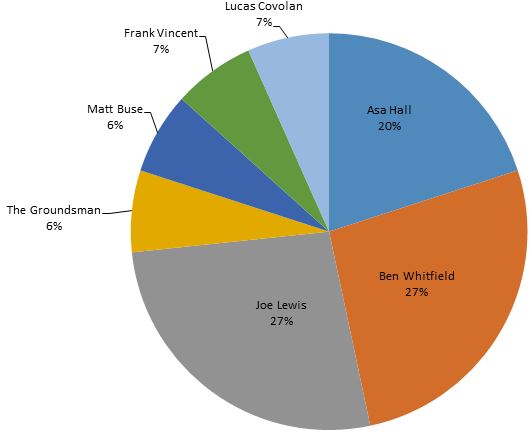 MH: Ben Whitfield. He’s only unsung in the sense that he won’t win POTS because Reidy has been so good again. I think everyone recognises his immense talent and fantastic work ethic. Special mentions to Frank Vincent and Matt Buse who were dominant at times during our early season burst.

BC: Joe Lewis has got better and better throughout the season despite playing in a variety of positions, a solid 6/10 or better every match. Julian Gouldthorpe has done sterling work on the pitch, working through the night on some occasions to ensure matches are on.

RH: Matt Buse, wasn’t well known before he started the season but proved pivotal in the games where we won early on in the season. Missed when he was injured.

KS: Ben Whitfield – The lad has been immense since joining and has often been the one shining light from some dreadful team performances. Ben would be top of the retained list for me.

MR: My dad hadn’t seen Torquay win since we beat Crewe in 2011. Years of watching listless and uninspiring performances didn’t have me too confident when we went to Fylde away. Imagine my surprise at not just our 3-2 victory but also how well the team played. A great afternoon. Hopefully it won’t be another seven and a bit years before he sees his next win.

RE: Sam Druiff having podcast wanker chanted at him at Barnet.

JU: Reidy’s first goal of the season. Sun shining, 2-0 up at home to a decent Boreham Wood side, Reidy scoring a worldie. We were back!

SJ: Reidy’s knee slide in front of the BT Sport cameras. Iconic after a scoring a goal Cruyff would be proud of.

MR: Meeting other contributors from the site at home and away games this season has always been good fun. Discussing obscure Torquay United trivia from years gone by over cheap pints never gets old whether it be in Nottingham, Maidstone or at Plainmoor. Look forward to doing it all over again whenever next season starts.

BC: The sheer number of injuries has been alarming and I’m not sure they’re all coincidental. It’s been the stem to many of our struggles this season. Pick a number one and stick with them, alternating keepers isnt a great idea when the back four isnt settled in the first place.  For goodness sake, please make it to the third round of the FA Cup just once please.(and then lament our luck as we get Gateshead away).