“If you want dependable, win it in the air and take no prisoners, then he was your man” – Peter on Alex Watson

Peter Wade is next up to choose his TUFC Dream Team

Having moved to Devon in 1984 to teach at Coombeshead School I was then a Kettering Town and Blackburn Rovers fan. My first game at Plainmoor was on 24th February 1987, to see the all-conquering Northampton Town of that season. It wasn’t until that the 1996-97 season that I could claim to have become a Gulls fan, when Chris and I started going regularly. In my time I have been to 593 home games and 280 away, so seen a few players; my selection is based on both quality and sentiment.

Perhaps not the best we ever had but the most consistent over a long period. He was solid, a great shot stopper and really good in one-on-one situations.

He was quality both defensively and going forward. The fact that Everton bought and played him says something.

On so many fronts he was so good. Yes not quick, but wingers never did him and what a left foot, Tim Sills etc must have thought all their birthdays had come at once.

Midfield is a hard choice but you need an enforcer and he was good at that and leadership; oh that goal at Wembley.

We have his signed shirt framed in the hall. What a player, he read the game so well and one game at Ebbsfleet stands out when he just bossed the game – oh and like Nico such a nice bloke.

Another hard choice, but if you want dependable, win it in the air and take no prisoners, then he was your man.

Not everybody’s choice as he was a bit hit and miss, but on his day he was total quality and popped up with so many important goals. We talked to him in a Manchester bar after the play-off final and he was totally gutted and annoyed that MUFC had watered the pitch and the ball just wouldn’t run.

Well it has to be, as he is the best Gulls midfield player I have ever seen, why did he not play at a higher level – he would today. He saw a pass so early, rode challenges, if not that dire one from Flitcroft at Rochdale in the first minute and the Ref bottled it. He was still great when I saw him play for Shepton Mallet at Buckland in 2015.

I know he wasn’t the most natural, and couldn’t do it in EFL but a proper centre forward when we needed one. How many people have said that his Wembley goal is their #1 highlight; we were right behind that header and as it flew in time slowed down I will swear.

Oh he was good that promotion season, his movement, pace and finishing were just so good. I remember Dave Thomas telling me just how much extra training Graham and Russell did so that he knew when Alex would play the ball.

Another player that just makes you want to go back in time so you could see that goal v Scarborough in the play-off game, it bent miles. Never quite sure of his best position, would be great in a 4-3-3 today.

Quality on the ball, shame he never did get one in from the half-way line.

So good on the ball, perhaps not selfish enough as a striker.

Worked so hard for the cause in a series of poor sides and that goal, oohh.

Another quality defender, and good on the ball when it wasn’t fashionable.

Not quite Alex R but I loved to watch him, he was several thoughts ahead of most players.

Could have been Buckle or Rosenior but for the quality of football we played last year, his brilliant attitude to the fans and for bringing us back from the dead, he gets the job. 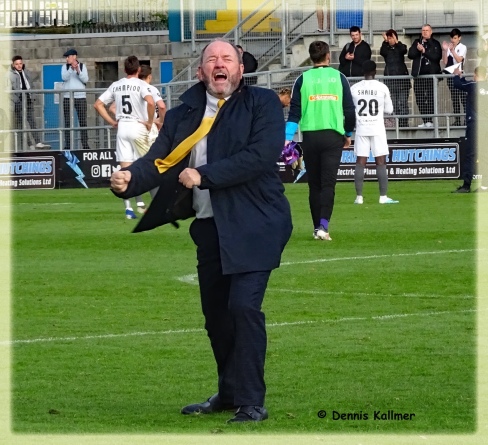 2 thoughts on “My TUFC Dream Team by Peter Wade”