“He was a vital part of the midfield and he underlined the sheer importance of having a holding midfielder, something I feel we have sorely missed since his departure.” – Joseph Pope on Damon Lathrope

My earliest memories as a Torquay fan include going to Tony Bedeau’s testimonial, and of course THAT day at our ‘Second-Home’ in London. Ever since then I have enjoyed the ups and downs that come with supporting this fantastic football club.

Does anybody even come close? I remember seeing him on his debut – a 2-1 away win in a pre-season friendly against Tiverton Town – and even at that early stage you knew that he was going to be a solid keeper. 46 games, 20 clean sheets and a Team of the Year Award later and there was no doubt that he was exactly that, and more! Vocal, physically commanding in the box, good with his feet, a leader; it was no surprise that a move to Peterborough materialised that summer. In that sole season with us, we won an astonishing 12 games 1-0, and he was an instrumental part of this.

An extremely under-rated defender who was excellent at doing his job; first and foremost defending. A reliable performer under Martin Ling, and even versatile enough to play in holding-midfield on occasion, he was another vital part of the solid defensive outfit that saw us get into the play-offs in 2011-12 and narrowly miss out in 2012-13. He had an unrelenting ability to look as if he was going to not tackle his opposite winger but time the tackle perfectly with a long, raking right leg challenge.

He was a phenomenal defender. There was a certain unerring ease at winning headers and was a fantastic professional that was a key in managing to keep us in the league as part of a severely under-performing side under Alan Knill. He never shirked a challenge and relished the physical battle, so it was no surprise when he captained Cheltenham to the National League title under Gary Johnson the following season. I hate to think how good he would have been if he hadn’t been plagued with cruciate ligament injuries. He was always a fan-favorite, and an eventual move back to Torquay United in some capacity was inevitable. Oh how I would love to have a fully-fit Aaron Downes in our defence now. 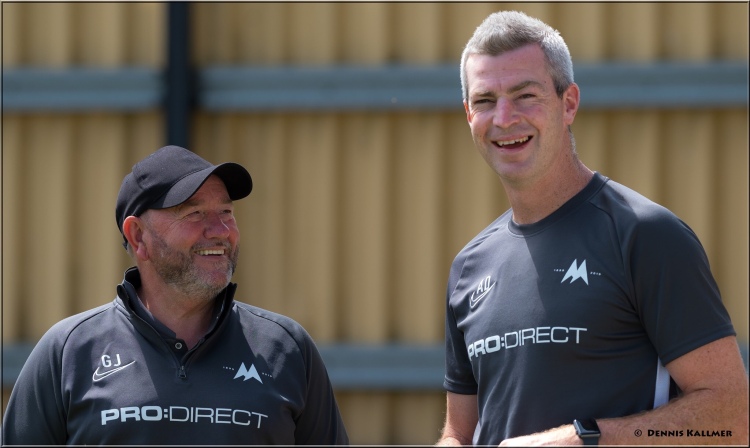 Not the first player in this team to have performed so admirably under Martin Ling. He played 40 games in the 2011-12 season and yet another consistent performer who was so difficult to play against. Like Aaron Downes, Ellis is one of few central defenders to have played at Plainmoor who looked a real threat from set-pieces. The transformation between the young central defender who had featured sparingly under Buckle during our promotion campaign in 2009 to the commanding defender that excelled under Ling was testament to the outstanding defender he was. No-nonsense and solid.

Who else? Any player that plays 314 games for the club and then goes on to pull off a great escape as manager deserves a place in any ‘Best Eleven’. Rest assured, his consistency and professionalism that he showed during his seven years made him a fans favourite, and his place in the Team of the Year Award under Ling was the icing on the cake of the promotion campaign under Buckle. His set-piece delivery and crossing ability sets him aside from the other full-backs we have had and, in his prime, was the sort of character that you would want in any team challenging for promotion.

While he excelled in central midfield, he had to get into this team. He was an excellent midfielder whose expert technical skill and footwork made him another key part of Martin Ling’s Play-Off Team. He benefited from having midfielders around him who were willing to do his tackling for him, but his quality on the ball was undisputed, and of course he scored THAT goal against Plymouth Argyle. It was no surprise when Eddie Howe came knocking for his services, and he was similarly impressive for the South Coast outfit during their promotion to the Premier League. A midfield maestro.

Was it ever in doubt? I was a huge fan of his. Another consistent performer under Buckle, even more so under Ling and a phenomenal professional. He was a vital part of the midfield and he underlined the sheer importance of having a holding midfielder, something I feel we have sorely missed since his departure. He ensured the midfield kept ticking over, and gave his fellow midfielders the platform to push higher up the pitch; 12 goals for Lee Mansell under Ling during the 2011-12 season is a fitting example of this. He provided the perfect transition between defence and midfield, and was unfortunate with injury second-time around at the club otherwise he would have been the ideal ingredient about which to build a successful side. His career was unfortunately cut short due to the horrific injury whilst at Woking, and is now a youth-coach at Watford where I have no doubt he will be successful.

Another outstanding performer, the sort of character you would want in your midfield. He loved a challenge and was in someways the ideal box-to-box midfielder. His place in the Team of the Year under Ling was arguably his most successful spell in a Yellow shirt. Of course, he was part of the famous Wembley-winning side, and was someone that guaranteed you an 8 out of 10 every week. Such is the quality professional he was, he also excelled at right-back and would be another player you would want in your side if you were pushing for promotion. It was no coincidence that he scored the winning penalty in the Play-off Final for Bristol Rovers, for whom he similarly excelled in a captains role. 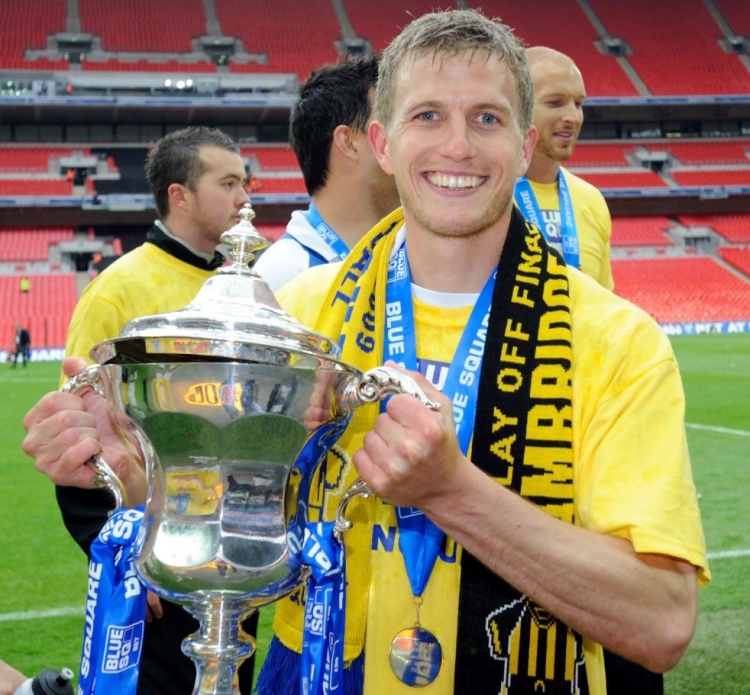 Despite only having played for us since September 2019, he has to get into my team as, for me, he is the perfect player. He scores goals and works hard  and actually takes on his man rather than cutting inside. What more do you want in a winger? We have been blessed with a number of technically-gifted players who have been let down by their work rate, but this guy doesn’t fall into that category. He’d be the first name on my team sheet, and likewise he gets in this team also. A fantastic find by GJ.

Simply a beast! On his day he was an absolute handful, unplayable in fact, and even had the goal return to show for it. He was another huge part of the Play-Off Team under Ling, and it was a real shame to see his career fade as it did once he left us for Burton Albion. Of course, he did like a red card or two, but the physicality he brought the team was vital and a real asset to have at your disposal.

Where better to finish? If you ever want to find someone that depicts what it means to keep working hard for a break then you need not look any further. Despite being played out of position as a winger for season upon season during the earlier part of his time with the club, and receiving unrelenting and at times unwarranted stick from the crowd, the rejuvenation he has shown under Johnson to become this potent front-man and figurehead is nothing short of remarkable. It is a vast difference to the inexperienced attacker that made his debut under Chris Hargreaves back in 2015. The season he had last year in the National League South was sensational, and he has answered the critics emphatically by proving he has what it takes to score at this level too. A vital part of Johnson’s side, and its fair to say that he is seemingly too good to drop – who would have said that under the previous managers?

An incredibly under-rated player who didn’t get enough plaudits for his work in a Yellow Shirt. He was an instrumental part of the side that got promoted to League Two under Buckle, and similarly in the Play-Off Team under Ling. While he wasn’t the most physically-blessed – that’s being kind – his work ethic was undoubted and a silent and steady performer in both sides.

Very much like Nicholson, any player that plays as many games as he did and then go on to manage the club deserves the title as a ‘Club Legend’, and his uncharacteristic right-footed pearler at Wembley epitomized that. Another fantastic professional and, while he wasn’t the most technically-gifted of players, he is another player that you would want in your side for the big games.

A character that divided much opinion between fans, his quality was undeniable, and on his day he was a real handful. His energy and physical presence going forward was a vital part of the successful Torquay sides in recent history. If it weren’t for his well-known reputation off the field – for the wrong reasons – he could’ve gone on to bigger and better things once he left us.

Oh Shrewsbury, why would you ever left one of your own players play against you? Well, I’m glad he did, for it is still one of the best individual performances I have ever seen. He ran them ragged that day, much to the annoyance of the seething Jermaine Grandison who pole-axed him before half-time. The way he used to score goals for fun made him a favorite of mine. It is no surprise he has gone on to score the goals he has in non-league, because he is far too good for that level, and under the right-management could still be a real handful still at National League or Football League level.

A case of what could have been, if it wasn’t for THAT incident. It was no surprise to me that he has gone on to make a name for himself as a real fans favorite at Newport, for he was in someways the perfect, all-round midfielder. Strong, combative, physical and the odd eye for a goal, he is someone I’d love to see back at Plainmoor as part of our midfield at some stage.

As much as we owe a lot of credit to Gary Johnson for the “rescue-mission” and heroics he performed last year to energize a somewhat stale Gary Owers side and bring a feel good factor back to the club after a couple of seasons of sheer pain, for me the honour of managing this fantastic team has to go to Martin Ling. He was a fantastic manager and had this talent of getting the best out of any player that stepped through the door. I am confident that if we had managed to get past Cheltenham in the semi-finals back in 2012, with the experience we had in our side, we would have beaten the eventual-winners Crewe Alexandra. That loss at Cheltenham somewhat staged the demise down the divisions until last years promotion. The way he left the club was so disappointing and a real shame, and he deserves one final shot at success with this side. Paul Buckle must also get a mention for getting us promoted to the Football League, and the play-off final at Old Trafford – which I hasten to add I somehow managed to find on in a pub in Florida during my holiday at the time – which started my love affair with Torquay.

With the characters that I have in that side you wouldn’t need one! If I had to choose, the armband goes to Aaron Downes. Captain of the Cheltenham side that got promoted to the Football League under Johnson – lets hope its not just the two promotions he has under Johnson’s stewardship!