“The team have been struggling badly and heads have dropped, but this man never stops trying” – Dom on Ben Whitfield

Who understands this goalkeeper rotation and wants it to continue? Anybody?? I thought not. Lucas played in four of the six games this month, and actually did ok for the most part – though the first Sutton goal appeared to go straight through him. Is he a better bet than Mac? I’d say no, but there’s not much in it. At the moment the concern over our central defence supersedes worries on who wins the weekly ‘paper, scissors, stones’ battle to play in goal!

When I approached this article, my bet for POTM was between the two Ben Ws’. Wynts was certainly one of our better players in November and a class above everyone else in yellow when we played Sutton. On the downside the Maidstone winger gave him a tough time in the FA Cup defeat, and of course the whole defence limped towards the end of the month. But Ben is the very least of our troubles at the moment I’d say; an impressive young man who continues to progress as time goes by.

On recent performances the gigantic beard that Cam has been growing may have to go! Our October POTM started well enough in November, as United bossed Halifax (was that only 4 weeks ago? Feels like longer..) to go joint second in the table. But…and it’s a very big but, the team then stuttered and the centre back partnership of Cundy and Cam have increasingly struggled. Cam has been better than Cundy – unfortunately that’s not saying much at this time! I’d also say Kyle is still the best centre back we have on the books, but the lack of an experienced partner is currently hurting us and hurting us bad.

Ahh Ramarni, we trumpeted his arrival and potential to do well in LD’s absence, but so far it’s been a bit of a disaster. It’s not been all his fault for sure, as GJ’s tactical juggling and the nervous centre backs have made life difficult for the youngster. He’ll certainly learn a lot about his game from playing regular senior football and hopefully gain guidance from the injured Liam Davis, someone who we have certainly missed (predictably). Improvement required.

Cundy impressed me in his early games at the club, with his composure and commanding presence, and I could really see the potential in his partnership with Kyle Cameron. Recently the defender has just lost his way. Dwelling too long on the ball, losing position and not communicating well with the rest of the back four (or 3, or 5), it’s been a rough month for the City lad – culminating in a shambolic game against Stockport County, where just about everything went wrong. I still believe in Robbie and his ability to be a future star, but at the moment it’s hard to see why he should stay in the team.

Joe Lewis was used sparingly by GJ in November, so his mark can be largely ignored to be honest! I’ve felt sorry for the big defender. He’s done okay when called upon at centre back, but hasn’t been able to maintain a place in the team – not even finding a spot on the bench last Saturday due to the number of loan players we currently have. Maybe his chance will come against Harrogate…who knows. Otherwise the Welshman may be wondering why he bothered coming down at all.

Oh Kalvin! The Frenchman has contributed very little in a yellow shirt for a while now and appears to have tested GJ’s patience to breaking point, finding himself a regular on the subs bench. On arrival from that bench, KLK has not exactly shied from the action and wants to be on the ball, but has made no impact at all since the Halifax game. At the moment he is drifting alarmingly and must show more hunger and desire for his undoubted talent to shine.

October’s National League Player of the Month has had a difficult time following the award up and in truth the midfield has been over-run in recent weeks. It’s not without trying though, as Matt works so hard to get around the pitch and help out his team-mates. With Asa and CLE returning, the ex-Taunton man may be edged out of the team, but he has proven a lot and will remain a valued squad player for Gary Johnson.

Jake’s value has actually gone up in November due to him missing games (isn’t it usually the way?). When Andrews plays he normally contributes something, so it was no surprise when he found the bottom corner at Eastleigh – although it wasn’t his day (or anyone elses) up at Chorley. The good news is he’s A) Fit and B) Back from suspension on Saturday, so Jake slots straight back into the team. We simply struggle without Jake’s invention and the support he provides the strikers.

It’s a sure sign of a slump in form when our POTM has a rating of 6.1 – but Ben Whitfield thoroughly deserves the award for November. The team have been struggling badly and heads have dropped, but the busy winger never stops trying. His end-product has not always been on the money during the month, however Ben is a real workaholic who notably raced back a long way in support of his defence on Saturday, even though the game had long gone. A great professional and an example for the lethargic Kalvin to follow.

Frankie only took part in the first three games, and his presence was immediately missed when he got a first half ankle injury against Sutton. The midfielder had really begun to assert himself on the team as the month started and was MOTM in that impressive display against Halifax. Unfortunately, much like Armani, we’ll have to wait until the New Year to see him again. Get well soon Frankie.

Jamie Reid is our most important player, and I won’t be moved on that opinion. Without him playing at full pelt, we are nowhere near the same team. Unfortunately an injury caught up with the striker in November, and he was fairly anonymous as we went out of the cup at Maidstone. No.19 has played a lot of games in recent years and needs to be treated with the upmost care; it was therefore a surprise when, clearly unfit, he was propelled back into action against Stockport. Once his fitness returns, it won’t be long before the striker starts banging the goals in again.

We all got excited about Saikou’s return to Plainmoor and it was perhaps unfair to build expectations to boiling point…but we just couldn’t help it! In reality Saikou has come back from a serious injury and looks a yard off the pace at the moment. Struggling to find his touch on the ball, his position within the team and also that partnership with Reidy; it’s been a poor month for him. SJ will come good though as that sharpness returns, I really think it’s just a matter of time. 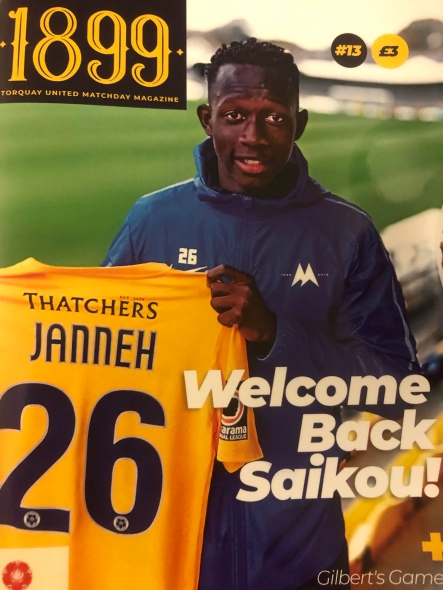 TT Player of the Month roll-call