In Halloween week Liam Davis ghosted in at the far post and produced a sexy finish to give Torquay another 3 points and cement their play-off place at a wet and windy Plainmoor tonight. The goal came after 55 minutes. It had the feel of a winner, and so it proved.

How often over the years have we seen the Yellows lose forgettable games like this evening’s Anglo-Welsh clash? There is a positive feeling around this young team though, and “winning ugly” is such a good habit.

132 North Walians who need their heads read for following a limited side such a long way on a Tuesday night (bless ‘em: heroes all), are probably wondering where their struggling team’s next win will come from. They tried hard and edged a first half that had me praying for Alzheimer’s to take a hold, such was the paucity of goalmouth action or anything approaching exciting football. It was the sort of night where “possession stats” are meaningless, because for 45 minutes neither side was able to move beyond huff and puff into anything approaching coherent attacking play.

Suffice it to say that at half-time my report would have read as follows: “Kalvin’s not at the races and has been kicked in the mouth. The Crossbar Challenge has been postponed”.

Gary Johnson sprung something of a surprise by preferring Shaun MacDonald in goal to our Samba Stopper Lucas Covolan. The big Geordie amply repaid his manager’s faith with a faultless handling performance in treacherous conditions. A word about that: it rained all night, largely heavily and with the wind coming from the East (diagonally from Bristow’s to Family), it wasn’t easy for either side to produce much quality.

United simply couldn’t get anything going in the first half, and with a Cundy error just after the restart it looked likely to be a long evening. But after Whitfield narrowly missed the angle and MacDonald got down to make a smart save, Liam Davis produced the night’s pivotal moment to cap an eventful couple of minutes. He’s a bit of a Rolls Royce is Liam, and his elegant finish had us purring as Torquay hit the front.

In truth, we were much-improved in the second half. It’s wonderful what a goal can do, and suddenly confidence started to flow. Andrews hit the bar with a 64th minute piledriver and by now the attack had been hugely enlivened by the introduction of the worst kept secret loan signing of the year, Saiko Janneh. What a player he looks. He brings purpose, aggression and poise to everything he does. Having quite rightly dispensed with his gloves 5 minutes after coming on, he went on to show exactly why Yellows fans are so tumescent at his return. Whether he was on the shoulder of a tiring defender, heading against the post in what was so nearly a show-stopping 2nd goal or tackling back deep into the Wrexham half, he was everything that Kalala hadn’t managed to be. Welcome back Saiko!

The win never looked seriously in doubt after we took the lead, and although Reidy spooned a presentable chance wide on a forgettable night for him, the prospect of re-uniting him and Janneh for the next dozen games is one to warm the cockles as winter starts to take a grip. 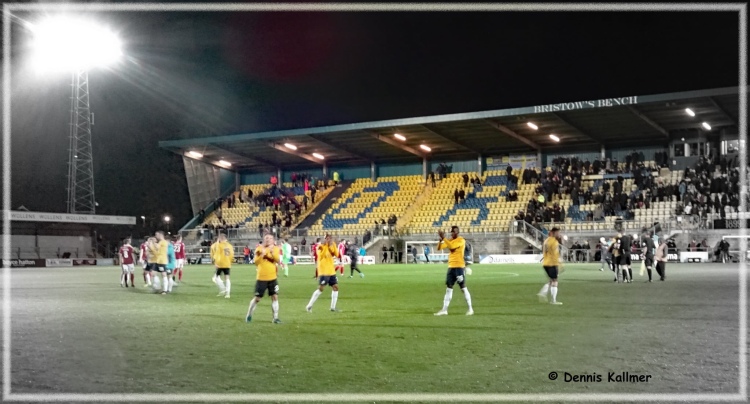 Cameron 8: A captain’s display. Outplayed his partner by a country mile tonight.

Cundy 5: Had a mistake or three in him tonight. Uncharacteristically jittery. Very lucky to get away with a first half blunder when, facing goal, he gave the ball to an inept striker who wasted a game winning opportunity

Andrews 6.5: Game of two halves. Average/poor in first half. Lively and much better until withdrawn in the second.

Vincent 6: Did make a couple of unrewarded forward runs and looks a decent player, but a game to forget tonight

Buse 5.5: Blackpool fans could sum this up. Matt Buse. He ain’t no Matthews! Not a playmaker. Journeyman. Offered little. Lasted the full 90.

Whitfield 6: Not at his best tonight. Great engine. I do like him.

Kalala 5: Stinker. It happens. He’ll have his days again. Should watch Saiko (and might well have to!). He can give up a bit too easily and sometimes closes opponents down, but fails to tackle. That’s not really what he’s there for though!

Reid 6: A rare limp display from the striker.

It's finished here 1 nil to the Gulls. We're on our way! #tufc

Man of the Match: Shaun MacDonald

Giving the award to our ‘keeper might give the wrong impression, because in truth Wrexham created little and may find it difficult to haul themselves out of the bottom four. But although I prefer Covolan, Shaun MacDonald amply justified his selection tonight. He was immaculate with his handling, got quickly off his line several times to snuff out danger and made a smart save just before we scored. One error in difficult conditions could have meant a very different outcome and he couldn’t have done any more tonight. Well played.

Saikou. I’m sorry to harp on about him, but he’s way too good for this league and I’m happier than Pharrell Williams on MDMA to have him back in a yellow shirt. Oh Saikou, oh Saikou, oh Saikou, running down the wing… and the middle. Welcome back Sir.

Do I have to? I thought we lined up 4-4-2. Kalala certainly never got forward enough to suggest it was 4-3-3. Whitfield tried to cover every blade of grass.

Limited. Welsh. Youngy did ok. Can’t believe they didn’t let him take a promising free kick he had won in an area, from which he used to pop them in regularly when he was the only decent player we had. Shame for him to be playing out his career at the bottom of this league. Probably not the player he might have been but for a couple of horrible injuries. He sat in front of their centre backs tonight and looked very competent. Good luck Luke.

Did well. Nothing nasty or controversial for them to deal with, but they ran the game well.

Apart from Saikou warming up? Saikou coming on? Saikou disposing of his gloves? Liam’s calm and effortless finish.

As they say in American sports, tonight was all about the “W”. We surmounted the loss of the injured Armani Little and had enough to put a moderate opponent away. If we’re going to challenge for promotion we need to be winning games like this, and 6 points from the Saturday-Tuesday fixtures doesn’t happen as often as we would kid ourselves it does.

Can we get a result at the Shay? Time will tell. It’s certainly been done before. Shout out to Derek Dawkins!! Join me on the 6.40am FlyBe to find out….

Deserves a tweet tonight, up against it against a good Wrexham side tonight but held strong and delivered a professional 1-0 W. Well done everyone! Onto another big one on Saturday ✅🤪 happy to get another MOM tonight! 💪🏻 https://t.co/3a09JmqjjC

Thought Shaun Mac looked solid between the sticks. One crucial save at 0-0. Wasn't our most accomplished defensive display so a clean sheet very welcome.

Away sponsors of Kyle Cameron