On a personal note, it is wonderful to be back from Australia with TorquayTalk, my friends, and the buoyant Yellow Army who headed north to Nottingham in respectable numbers yesterday.

In a match that saw Torquay never really get going, early goals split between both halves were enough to see a resurgent Notts County take the spoils against an application-shy United, who will be left wondering what might have been.

All eyes were on Meadow Lane – a ‘proper’ stadium, sat in that triquetra of Nottingham sporting history, with Forest and Trent Bridge less than a few minutes walk in either direction. In times gone by, this would have been a Football League fixture, and it felt it today, at least off the field – particularly as a crowd of 5,265 were announced – the 673 that Torquay contributed rightfully receiving a round of applause from the home faithful.

It was a cagey, scrappy start and neither team had really imposed themselves in the opening exchanges. As the 8th minute rolled in, we perhaps didn’t deserve to be down, but neither could we argue to the contrary.

County took a corner, which was seemingly routinely cleared, falling to the feet of Richard Brindley. His shot, at the time, felt so inconspicuous, it was just stroked back at the danger area and for a second, I swear, time froze. Like a homing beacon, it carved a path through some 15 bodies and not one of them moved, there was no hopeful dive, no last ditch block, it was just…still. The ball nestled, the net rippled, the crowd roared. 1-0.

Notts were bouyed and United heads dropped – for a few minutes, it seemed we might find ourselves two down but the Gulls re-grouped, and the game became painfully balanced.

Very little of note happened for the rest of the half. United huffed and puffed, certainly enjoying the bulk of possession but between midfield and attack, it was hopeless, we just couldn’t mount anything substantial to pose Notts a serious question. Not once did Sam Slocombe in the County goal have to worry, and as the 45th minute ticked into place, you felt we might have the capacity to step it up a gear in the second half.

It took just three minutes to settle that thought.

Enzio Boldewijn burst down County’s left and fed Sean Shields who could only be halted by what seemed like a fairly innocuous challenge. He picked himself up, whipped in a tantalising cross that, via the head of Kristian Dennis, nestled in Lucas Covolan’s goal. Defensively again, Torquay had failed to react – at all – and we were punished.

Notts hadn’t needed to be particularly good at this point and as The Yellow Army grew restless, the Magpies found themselves in full voice, momentum and possession settled with the hosts.

The Gulls were frustrated and for the next twenty minutes seemed to effortlessly find a way to upset referee Gareth Rhodes. Notts managed the game clinically and as the seconds ticked by, it became more and more desperate for United.

There was one brief hope, Kalvin, who had struggled to impose himself, lost his man and sprung a shot away. It was blocked, but in the resulting scramble United saw a stabbed effort cleared off the line. It was to be our best chance.

We barely caused a whimper in the closing exchanges. It was a game awash with set pieces but for those that didn’t sail hopelessly over, they nestled safely into Sam Slomcobe’s untroubled gloves – he won’t have an easier game this season, sadly. 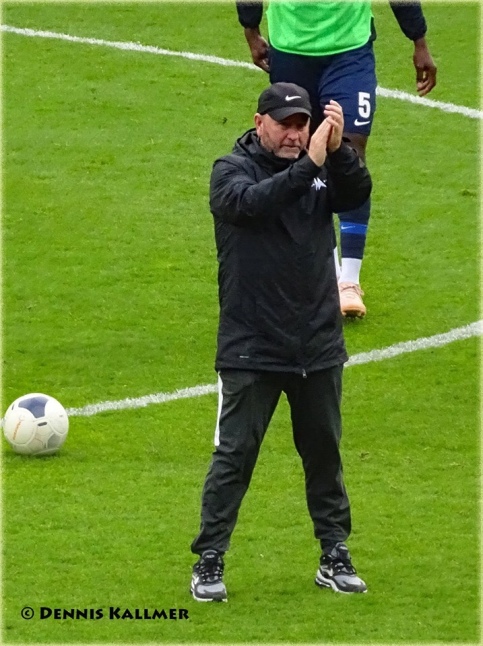 Covolan – 4 – Distribution poor and felt the force of GJ a few times in the second half. Edgy at the back, a few dropped crosses and hesitant clearances.

Wynter – 5 – Ben and Liam saw plenty of the ball but struggled going forward. The game constantly seemed to be crying out for overlaps, but they weren’t forthcoming.

Cameron – 6 – Tried to rally the troops somewhat, lead the line well, ‘mistake free’ are worth the better ratings today.

Kalala – 6 – Struggled, but the one who looked most likely. Notts worked hard to keep him quiet.

Vincent – 5 – Struggled to impose himself today against a big County team.

Buse – 5 – The midfield was generally just non-existent today, Matt being no different.

Whitfield – 5 – At the risk of sounding like a broken record, Ben offered very little, midfield overwhelmed.

Reid – 5 – Really difficult game for Reidy today, offered nothing but nothing was forthcoming, either.

Subs: 5 – Duku and Little were both no better or worse than those they replaced. So difficult to come into such a stale ‘team-wide’ performance and make an impact.

673 away fans. Not been a good today but the support has been top class. #tufc

Man of the Match: Kalvin Lumbombo-Kalala

It’s a tough one for the wrong reasons today, unfortunately. Kalvin looked our most dangerous, so in that regard, I’ll send it his way but in truth, he was well managed by County who clearly looked at him as the man to stop.

As you were after the previous three wins. Hindsight is a wonderful thing, you shouldn’t change a winning formula, and as it goes, I don’t think it would have made a difference even if we had today.

County delivered a professional performance today, they didn’t blow me away, but they didn’t need to. If it was their team I was rating, I wouldn’t need to dish out much more than a 7. They’ve hit a rich vein of form and were always going to be a tough opponent. If they continue to show that mature approach, they’ll go far. It’s a tough old division and experience is often the route out. A big team as well, which doesn’t always correlate with a good result for Torquay.

Gareth Rhodes didn’t have a great game, this seemed to be universally felt with the County fans I spoke to on the way out, so not really an advantage one way or another. I always struggle with referees that slow a game down, I’d rather the tolerance level was higher for both teams, so at least we can keep a degree of tempo. Given that we were down so quickly, his insistence to blow for every little challenge didn’t help us.

To truly appreciate Brindley’s goal, look at it from the Kop’s view. Serious swazz. pic.twitter.com/kjhulKhK8j

I think this loss will have really stung GJ, we failed to reach his standards and it was telling that he shot off at the end. Make no mistake, this was always going to be a tough game, but we offered so little. I don’t necessarily think a change of tactics or selection would have made any difference, we have the talent, it just wasn’t applied and sometimes that feels far worse than the reverse.

The training ground will be calling for the lads on Monday, and I suspect, endless set piece drills, both offensively and defensively.

It’s frustrating that we’re out of league action for a few weeks now, but at the start of the season, I’d have bitten your hand off to be going into the cup weekend as we are.
Prior to my time spent Down Under, away at Gloucester was my last trip to see Torquay United. It’s clearly been a transitional year, but the fact I’m frustrated to come away from Notts County with nothing is telling.

Congratulations to @jake_andrews1 on making his 50th #tufc appearance this afternoon.