A very proud day for me and my family as I make my competitive TorquayTalk match report debut. After Tuesday night’s good away point at Woking, this was a chance for Torquay to start to build some momentum and push on to keep in touch with the play-off spots. There were a few injury problems after the physical test in the week with Little, Hall, Lemonheigh-Evans, Edwards and Niate missing out.

The Yellows started with three centre backs in what I assumed would be a 5-2-3, with the full backs acting as wingers when attacking, instead it turned out that Lewis was playing as a holding midfielder. A case of Joe playing too well mid-week to be dropped, but Cundy being too good to leave out.

It was a good solid start for the Gulls as they created three good chances in the opening 15 minutes. There were shouts for a penalty when Davis went down in the Harrogate box, but the referee decided that he had dived and I have to say the ref was absolutely bang on. I do love Liam Davis and I’m sure he loves me, but that was a poor attempt.

Torquay were in charge of the match, getting in and around the opposition box frequently. The ever lively Whitfield worked himself into the box to get a shot away that was blocked well by a defender out for a corner. Robbie Cundy rose highest to smash the header hard and low, but it crashed off the base of the post.

There was a break in play as the Harrogate right back took a nasty knock to the head which required some serious bandaging. Shades of Terry Butcher. Then came 1 of 2 very contentious decisions by the referee. Harrogate worked themselves into the Torquay box and sent one of their players towards goal. After some attention from Cundy the away player went crashing down. The referee pointed to the spot. From the angle I saw it I didn’t see much, if any contact. Up stepped the experienced Jon Stead who slammed it into the bottom right corner, Covolan went the other way. 1-0 to Harrogate.

That goal seemed to unnerve Torquay as they started to rush and panic when they had the ball. Often just lumping it up towards Duku with very little success.

Half time came and it felt like we had been here before. Control the early stages, miss a couple of good chances, concede a sloppy goal and then panic. Sir Gary decided a change was needed. He dragged the lethargic Duku off for Kalvin Lumbombo Kalala.

It didn’t take the Frenchman long to make an impact. Skilful work from him led to the ball moving out to Wynter on the edge of the box, and the dashing full back slid it across to Jake Andrews on the centre of the 6 yard box. The midfielder spanked it home. 52 minutes in and 1-1.

The goal gave Torquay a lift and it showed, they were back on the front foot. Kalala running at the away defence and each time getting past his man. Vincent popping the ball about and Andrews doing the same.

The referee (more on him later) was not having a good day. He was missing a lot of off the ball bits and pieces, with the away side just flattening Torquay players as they tried to make runs.

On a rare attack from Harrogate they got themselves back into the lead. A looping cross was sent over which Covalan should have came and collected. He left it and Jon Stead was waiting at the back post to slide it into the net. 1-2 to Harrogate.

Not long after that came contentious decision no.2 from the referee. Andrews tried dinking the ball over Jon Stead who blocked it, the whistle blew and out came the yellow card; Stead’s 2nd after gaining his first for accumulating too many fouls. I’m not sure that it hit his hand/arm or if he even knew anything about it, but we’ll take it. Harrogate down to 10 men.

Five minutes later and The Gulls were level. Kalvin Kalala took the ball in midfield and drove at the away back-line to unleash an absolute thunder-bastard of a strike. It ploughed straight into the goal like a bullet, the keeper stood no chance. Très bien Kalv.

United were really in the ascendency after that goal. Andrews got himself into the box and was brought down by some clumsy defending. Penalty to Torquay. Up stepped Reidy to hopefully end our bad recent run of penalties. In a surprise to absolutely nobody, the penalty was saved acrobatically by the keeper but luckily it bounced straight back to Reidy and he didn’t need to think twice and he rolled it in. 3-2 and pushing for more.

They didn’t have to wait long for Torquay’s 4th. More good work from Kalala out wide gave him some space to find Reid who turned and placed it into the top corner with his left foot. Reid’s 7th goal of the season which makes him the leagues top scorer. BUT HE ISN’T GOOD ENOUGH FOR THIS LEVEL, according to some.

The game started to wind down from there as Harrogate, visually worn out, were begging for the final whistle. The only thing of note in the last 10 minutes was the competitive debut of Matt Buse.

Lucas Covalan 6 – At fault for the second goal and a couple of dodgy kick outs.

Ben Wynter 7 – A good game from Ben, solid defending and even better going forward. He will be in the Football League within two years.

Kyle Cameron 7 – Kyle needed a good game today after a couple of not so good games. He was back at it today. Ha’way the lad.

Robbie Cundy 7 – A decent debut for Robbie, very excited to see more of him.

Liam Davis 6 – Liam had a good game but marked down for that dive.

Joe Lewis 6 – Not too bad from the Welshman in an unfamiliar position.

Jake Andrews 8 – A great day for Jake, a goal and controlling the midfield in Evans’ and Hall’s absence.

Frank Vincent 7 – A solid game, good to see him get a full 90 minutes.

Ben Whitfield 7 – A lively performance from our new winger, another one I’m looking forward to seeing more of.

Jamie Reid 8 – The Prince of Park Lane will get 25 goals, watch this space.

Manny Duku 5 – An ineffectual performance from Manny, needs to up his game or he will be out.

Ryan Dickson 7 – Very good to see Dicko back out playing after his pre-season was cut short at Buckland. Brought valuable experience to the midfield.

Matt Buse N/A – Didn’t have much time to put his stamp on the game.

This is the Kalvin we all know and love. The game changer, the bloke who’s gonna make the full back beg for full-time, the bloke who is gonna smash in a worldie and just walk back to the halfway line as if he’s just rolled it in from 2 yards out. Hopefully this is the start of a great run of form for the Frenchman.

When the team was announced before kick-off it looked as if we would be playing 5 at the back as we had Cameron, Cundy and Lewis all starting. Instead Lewis was deployed as a defensive midfielder with Vincent and Andrews in the middle and Whitfield at the top of the diamond. That would’ve solely been down to circumstance; if we had Hall, Little and Evans available then those three start all day long. Reid and Duku don’t seem to be gelling as a front 2, then again anyone would find it hard to fill the gap Saikou Janneh left up top.

Harrogate are a no-thrills good mid-table side, they won’t be looking over their shoulder come the end of the season nor will they be challenging at the top. The most notable player for me was their captain, Burrell. He was very good at breaking up our attacks and distributing it forward.

Equally poor for both sides, Stead’s second yellow was laughable. He just seemed to get all the basic decisions horribly wrong.

It has to be the red card for Jon Stead. After that we really had our tails up. Where we’ve seen other teams just slow everything down and frustrate when they are reduced to 10 men, we didn’t give Harrogate a chance to start to do that. We were on them like a rash. Hassling and hurrying them into losing the ball in their half.

It’s not often Frank gets a full 90 minutes in our midfield but I felt that he’s grabbed the opportunity with both hands. He was great going forward and equally as good defending. Well done Frank!

We weren’t at our best and we were on the right side of a bad refereeing decision, but we earned that win. So many times it’s been us wronged by the officials and made to pay. For a team missing it’s first choice midfield we still controlled that part of the pitch. I do think we need another striker to partner Reidy as neither Duku or Keating are doing much at the moment. All in all, a pleasing win against a team who are no mugs. 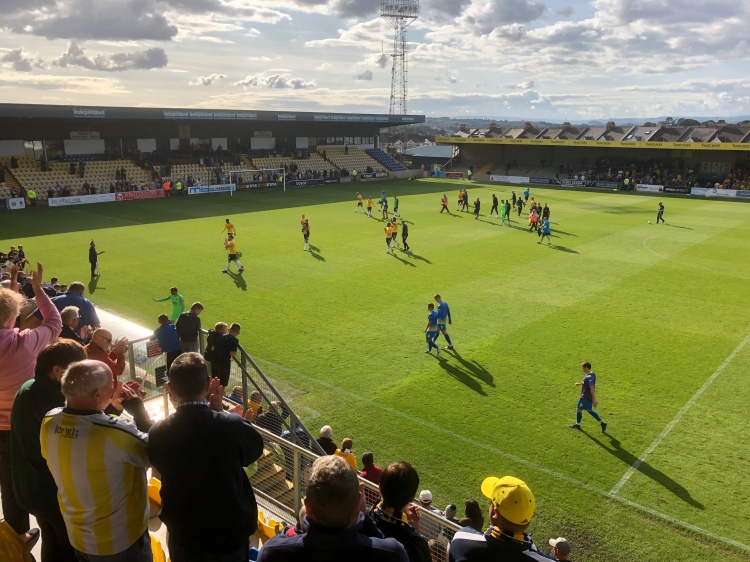 Jamie Reid is currently on 49 career goals for #tufc which makes him the Gulls joint leading scorer in the 21st century with David Graham.