“Win your home games and pick up points where you can from your away ones, and you won’t be far off” is a sentence/TUFC mantra my dad has often uttered over the years…and I’m inclined to agree (he’ll appreciate that I’m sure). Two games over the Bank Holiday weekend is always going to be a test, and winning both was just a bridge too far for this youthful Gulls team. It wasn’t for want of trying though and this National League learning curve continues for Gary Johnson’s lads.

The Aldershot win was a proper performance for me and one I’ll concentrate on because I didn’t make it to Barnet (leaving my wife with the kids twice in three days was a bridge too far for me!). Sure I’d love to see 4-2 or even 5-2 victories at Plainmoor, but I’ve always been of the belief that controlled/solid 1-0 or 2-0 wins can form the basis of a successful season. In truth we bossed matters from the start. The defence pushed up and showed welcome aggression, the midfield hussled and harried their opposition and eventually it was that man Reidy with the game-breaker. What a bloody goal that was, and it wasn’t even our goal of the week! We’ve been spoilt with net-busters in the last year haven’t we.

Basically we imposed our will on the Shots until they broke. It wasn’t all pretty, as passes and moves broke down on several occasions – however it was a confident sign of intent throughout the team. Making Plainmoor a fortress has been one of GJ’s main aims on arrival, I think we’re getting there. Repeating the feat against better teams than Aldershot will require more quality and more endeavour, something I’m sure Gary is aware of.

The stand-out performer on the day for me was Connor Lemonheigh-Evans – what a player this lad is! CLE first joined us on loan during the ill-fated Owers days, and after taking a little time to get used to his new surroundings, he was a bright spark at the end of the miserable 2017-18. Last season as we all know he took his game to a new level, bossing midfield with the maturity of a seasoned pro on numerous occasions. His arrival back at Plainmoor astonished me somewhat, surely a league club would be desperate to have him onboard? Apparently not.

After coming on as sub against Boreham and taking up a role behind Reidy he hasn’t looked back. Connor is happy playing in tight spaces and can control the ball on a proverbial sixpence. Add to that his brilliant work-rate – closing down the Shots goalkeeper again and again – and his intelligence with and without the ball, then GJ really has a prized asset on his hands. By intelligence I mean the simple things, such as taking up positions where his team-mate can find him – be that Lucas Covolan from a throw-out or a full back from a throw-in. That sort of thing doesn’t make headlines but makes a difference. The last piece in the jigsaw of course is providing the finished product in goals and assists – in this roaming position he’s making his own, Connor can fill his boots in both those columns.

I’ve discussed the good, so I’ll continue with the other side of the coin…which currently means Kalvin Kalala and his shaky early-season form. The pre-season friendlies saw KLK tear up some defences with his pace and ability to dribble past the defenders at will. I think we were then all anticipating fireworks when the real games got under-way and unfortunately we’ve seen very little so far from the exciting winger.

Initially I think it was a fair assumption that Kalvin missed the over-lap from Liam on the left-hand side and often found himself double-marked. But LD is now back (and sparkling I should add) and KLK is still struggling to make an impression on proceedings. Last Saturday the full back knew enough to show him onto his less favoured left foot and too often the United man found himself muscled off the ball, as the space was closed down around him. This didn’t occur very often in the NLS, where United’s quality and fitness created space for him to shine. The National League is a whole new ball-game. 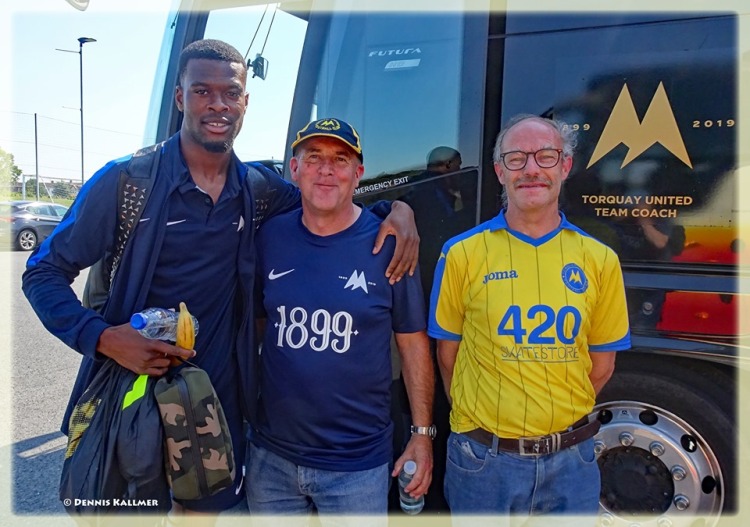 When he finally did get a shot off in the 2nd half, it ricocheted perfectly for Opi to bag the 2nd goal at least – but overall it was another frustratingly quiet afternoon for the Frenchman. Opi on the other hand was brilliant and showed expertly how to play wing with pace and movement to spare. Just a shame the wee man couldn’t provide it again at the Hive. KLK went off at HT at Barnet and needs to work hard on his game and toughen up to repeat last season’s electric form. With GJ’s guidance that potential can be unlocked once more, I am sure of it.

It was a frustrating day for the lads at Barnet (TT were there in force whilst I refreshed for updates on my phone). Armani’s fabulous goal was so good, it was barely believable! Much like CLE he can potentially grab plenty more in 19-20. Unfortunately 2-0 is never a totally safe lead, especially when your legs go wobbly in the second half. It was a ridiculously hot day where we could have done with more from the subs bench (the jury is still very much out on Manny Duku), and didn’t quite have the concentration to grind it out. 11 points from seven games is not too shabby, it’s about what I expected as we became accustomed to National League football. We’ve no right to expect to steamroll teams on entry to a higher division, but we do have the man to make the correct adjustments here or there as the season rolls along. In Gary We Trust!

Last Thursday saw three of us (Sam D, Matty H and myself) attend a TUFC sponsorship photos day. It has a fun hour or so, briefly chatting to Gary Johnson (resisting the urge to give him an embarrassing hug) and then talking over footballing matters with our sponsored player Kyle Cameron, though his eyes lit up most when I mentioned playing Pool! Meanwhile Sam Druiff unashamedly got a mention in about the TT Podcast as soon as humanly possible. The picture with Kyle is below. I initially planned a slightly more serious and considered face – but this was hijacked by Reidy and Jake Andrews bellowing out stick for the player ratings! The fact they actually read our match verdicts made me smile anyway.

The boys (who all trooped into the Gulls Nest in their full kit) seem a really tight-knit bunch, who get on great and have a group language of their own! I cast my mind back to last season’s ‘meet the team’ evening and the stony faces that were dotted around the place – the change from then to now is like night and day. No greater change has occurred than Jamie Reid. He looked shy and uneasy last year; this year he clowned around and helped dictate the banter. An alpha-male amongst the United squad and someone on top of his game, as illustrated once again by that ultra-sharp turn and shoot last Saturday. This is the transformation that our boss has made, and seeing that camaraderie around the squad only made me more optimistic for the rest of the season.

The afore-mentioned TT Podcast reached Episode 7 this week as it continues to build momentum and listeners. The combination of Marcus’s assured steer of the pod and his research plus Sam’s candid and animated opinions, are a winner – this is not TorquayTalk bias, it’s just the truth. Check out the link for the pod on the TT site, you will not regret it.

FINAL WORD: Something the Podcast has touched on in the last couple of weeks is the dreadful Bury situation. If I’m being honest, I’m not great at focussing on non-Gulls related footballing matters and have often lived in a TUFC bubble (not literally), but this situation has really grabbed my attention. An established league team with a proper history and die-hard fanbase has been pushed over the brink, and I totally feel for their supporters. If the boot was on the other foot (as it almost was a couple of years ago) and we faced seeing Torquay United disappear before our eyes then we’d all be devastated, that is a fact. So don’t dismay too much if we lose some points along the way, this is a Gulls team on the up with a group of players who desperately crave league footie back at Plainmoor. These are good times…who knows they might end up being great.

TT MAILBAG: Name: Malcolm Richards
Comment: Thank goodness for TT! It’s now wed evening and still no match report in the Herald Express on line. At least we can read all about it in TT.

Pick. That. Out. 🔥 @armanilittle off the mark for the Gulls with a bang. #TopBins #TUFC 🎥 BT Sport pic.twitter.com/EQfplQdOJg