Our gaffer talks Kalvin Kalala through a seemingly complex tactical manoeuvre on a tactics board. To the left of the “pitch”, we see the quote “How a team thinks is how they play and how they play shapes how they think”, attributed to “Gary Johnson, 2019”. The camera man zooms in on this quote and lingers on it for a good five seconds, in case anybody hadn’t noticed it already. That short scene is an encapsulation of this four-and-a-half-hour bonanza of dressing room action, training clips, highlights reels and player BANTZ: Gary Johnson is everywhere.

My main takeaway from the “Champions 2018-19” DVD is that ‘our Gaz’ has an incredible ability to stamp a big white Adidas-trainer-shaped footprint all over our football club. Everything smells of Gary Johnson. The players and staff speak his language; his philosophy recaps are relentless; and his ebullience seems infectious. The documentary itself was his idea and there are many of his trademark (long, yet captivating) ramblings scattered throughout, both to the camera and to the players.

I expect that there won’t be many people who have had the time and motivation to watch the whole thing through yet, but fear not: the beauty of this documentary is that it’s almost impossible to spoil. If you aren’t aware that we won the league last year then the DVD case which says “CHAMPIONS” in big yellow letters is a big giveaway. One of the most fun parts, though, is the games where you’d forgotten the result and (most of the time) you get a lovely surprise that we, for example, tonked Dulwich Hamlet 5-2 at home.

This isn’t going to be a Mark Kermode-esque review of the documentary because a) I’ve never written a film review and it’s not really my scene; and b) this isn’t trying to be a “good film”, it isn’t a “good film” in the sense that the Shawshank Redemption is a good film. The quality is generally poor and there are too many spelling mistakes to count, but that is utterly irrelevant because it is entertaining and eye-opening and I believe that was the ultimate aim. Thus, instead of auditioning for a job alongside Simon Mayo on a Friday afternoon on 5Live, I will simply run through what this documentary shows, what it doesn’t show, and a few fun/interesting things I picked up on.

I hear, although I’ve not seen it, that the new Leeds United documentary is characterised by the lack of contact with Marcelo Bielsa: the viewer is greeted with anecdotes and interviews about the great tactician but is made to wait until the sixth episode to hear from him directly. Our documentary is different. It is book-ended by Gary Johnson monologues in which he broadly explains the rationale for the creation of the documentary, thanking the fans and hoping that they enjoy it – and we hear similar addresses to camera throughout.

Yet it is the interviews with the other characters that reveal more about his impact on the club than anything else. Aaron Downes is a prime example of this. In team-talks and post-match interviews he makes reference to “our game” and “team energy” – both phrases that are staples of Johnson’s lexicon.

The players, too, are absorbed by Gary’s team meetings and chats. One, held in the dressing room before Wealdstone (h), entails the manager running through a bullet point list of attributes that “Make Champions”. If I had to sit and listen to any other human read this list – things like “will to win”, “relentlessness”, “honesty with yourself and your team-mates” – I’d be bored stiff, but you can tell that the players are fascinated and motivated by their leader.

Some of the funniest moments come when we’re playing poorly. Unfortunately, I probably ought not to take too many quotes from Johnson’s rant at half time at East Thurrock due to the Malcolm Tucker-esque swear-count, but it is probably my favourite scene. Gary’s ability to serenely lecture about intensity and mentality in a way that makes it mildly interesting, but also to rip 11 men to shreds with an expletive-packed tirade, is un-rivalled. He also has an excellent turn of phrase, typified by his assertion that the lads “lost their arsehole” in the 2-0 defeat at Welling. (There are many funnier, ruder examples throughout).

Outside of the dressing room, the viewer is sometimes treated and sometimes subjected to some player BANTZ. Features like Shaun MacDonald’s Big Coach Quiz and The Crossbar Challenge are enjoyable and revealing about the squad, whereas the “Players Give Each Other FIFA Ratings” is probably where I’d advise you stick the kettle on. And as for Gary Johnson’s Frog Game…well, I’ll let you make your own mind up on that.

A moment I was really hoping would feature in the documentary, and did, is Ruairi Keating leading The Ben Gerring Song in front of the Popside after lifting the trophy. To me, that sums up everything about last season: it captures the “rivalry” with Woking; the fun we had with some of the best creations our songwriters have come up with in my memory; a good connection between fans and players; and lots of champagne (Prosecco? Cava? Unidentified sparkling wine?). 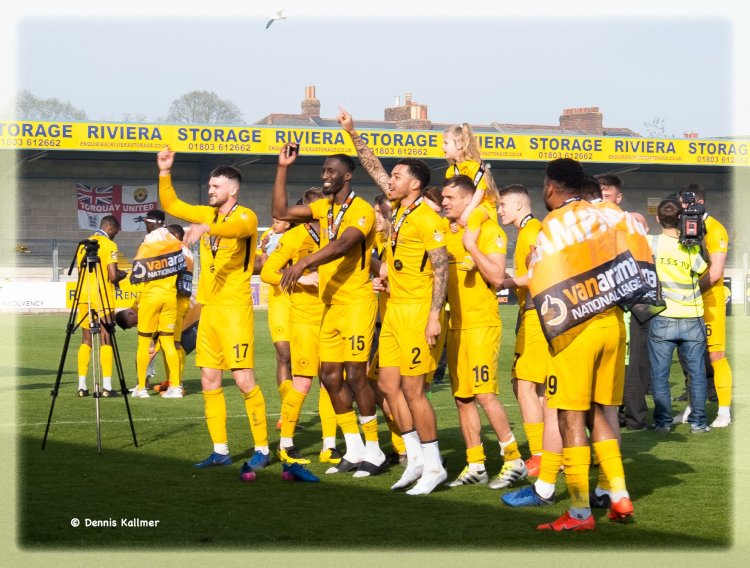 What We Don’t See

A bit of bad news is that the documentary starts before the Oxford City home game. Therefore, we are only treated to fifteen games’ worth of footage. Although a documentary about the whole season would last longer than a trip to Dover and back, I was slightly disappointed upon learning this. It would undoubtedly be a better documentary if Louie Birkenshaw had recorded Samir Nabi’s own goal at home to Hampton and Richmond or Gary Owers’ reaction to ‘The Hot Drink Against Gloucester Fiasco’.

We see some highlights from matches after Oxford City (h), but they are mostly our goals (though not all of them are included) and most moments of controversy or embarrassment (red cards, goals conceded, missed penalties) are also omitted. Also, it is clear that some dressing room scenes are absent. This is presumably to conceal any important tactical leaks and an attempt to achieve some sort of concision. I could probably watch every pre, mid and post-match team-talk and be fascinated, but I am quite a sad guy.

Perhaps predictably, any non-exciting training session is also left out. Someone without my cynicism would take from the documentary that all trips to Seale Hayne involve watching analysis videos, head tennis and one-touch 5-a-side tournaments. Part of me would like to see five minutes of Downesy barking instructions at the back four, screaming at Jamie Sendles-White for skewing a headed clearance out of play. Again though, I really am sad, so probably in the minority.

Some things in this documentary are eye-opening, some are unexpected, some are ridiculous. Here’s a quick list of the quirky things I noticed, and some trends I picked out:
• The players appear to sit in formation when in the dressing room. Is this…a thing?
• At half time in one or two games, the players appeared to change out of a muddy kit into a clean one. Again, in the sixth tier of English football, is this a thing?
• I get the sense that the players tend to enjoy themselves. This is probably partly due to being top of the league for most of the film, but also Gary Johnson’s enthusiasm and buoyancy simply must have an effect.
• Gary tries to drill into the team an enormous amount of ambition. He often makes references to elite sport: Man City, Virgil Van Dijk, Atletico Madrid and the New Zealand rugby team all get mentioned in team meetings.
• Asa Hall appears to have the word “ACE” sewn into the strap of his rucksack. O Captain, My Captain.

Gary Johnson is, without doubt, the star of this show. I’m not sure that’s the intention, I’m not even sure anyone making the film knows it, but he is most definitely the star. His comedy, his motivation techniques, his abuse of Connor Lemonheigh-Evans for failing to find a final ball in a long passing drill make him even more endearing than he was before. Indeed, most of the notes I made while watching in preparation for this piece are funny things Johnson said, most of which give the documentary its 18+ rating. There are few things funnier, to my mind, than watching a short, ageing Cockney man swear a lot at a group of young, sulky, tired men.

Overall, this really is a good watch. Yes, it’s long, it’s clunky, at times it gets tiresome, but the vast majority of scenes will either put a smile on your face or teach you something about our club – or both. Louie Birkenshaw and anyone else who played any role in its creation should be proud of themselves and we, as a club, owe them a lot for documenting such a momentous, enjoyable season. I’m off to re-watch the last hour because those celebrations at Plainmoor are genuinely heart-warming. Looking forward to writing a review for “Torquay United: Play-Off Winners 2019/20”!