Between late April and early July, a football ground is a husk. It has no soul. It has no real reason to exist. Without football, a football ground is just some big lumps of concrete with some metal and plastic on them. It is dormant. But each year the football ground stutters into life. Today wasn’t the volcanic eruption, but it was the rumbling of magma, spitting and spluttering its way into life up the pipe. In three weeks’ time, league football will return and that magma will burst out the crater and lava will bellow down the outside of Plainmoor – well, down three sides of it anyway, I can’t imagine there’ll be much explosion from the Boreham Wood “Football Club” fans in the away end.

The return of football to Plainmoor was a fun one. Goals from Little, Reid and Kalala helped United brush a rusty-looking Argyle team aside, in spite of Lolos’ impressive early goal. Both teams had chances to add to their tally and the result is probably a tad harsh on Plymouth, but the Gulls’ finishing proved the difference in the end. 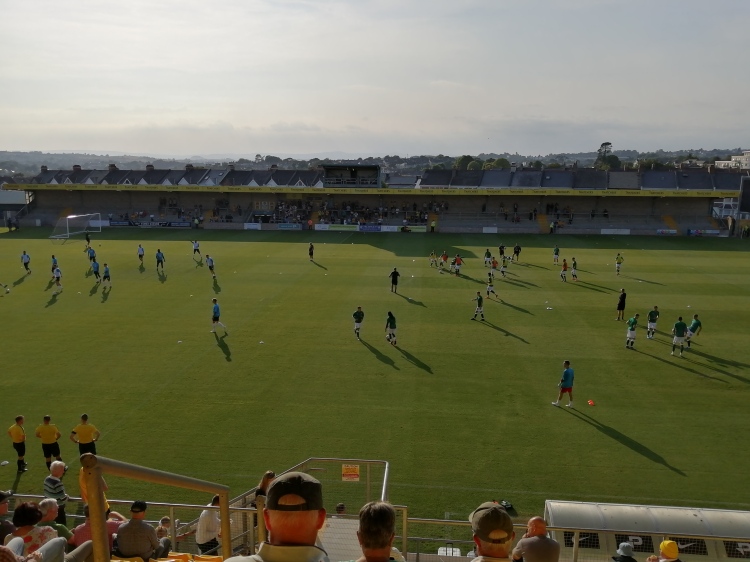 After starting sharply and winning a corner within seconds, Torquay fell behind. Little was caught in possession and Argyle’s number 19 (one of their only men who really looked like a Football League player) took advantage by driving forward and lashing the ball past MacDonald from outside the area.

The lead did not last long. Little won himself a free-kick about thirty yards out. His right-footed strike always looked too good for Plymouth’s ‘keeper and clipped the underside of the crossbar on its way into the net. A truly stunning free kick, a video of which can be found retweeted on the TorquayTalk Twitter account. It’s well worth a watch.

Kalvin Lumbombo-Kalala was United’s best player tonight. This was typified by his nifty one-two with Ben Wynter down the right-hand side. The Frenchman kept his composure as he reached the touchline and his cut-back was straight into Reidy’s path. ‘The Prince Of Park Lane’ did the rest, finishing as clinically as we’ve come to expect from him.

Duku fancied himself for a penalty towards the end of the second half. While the officials were appalling tonight, I think the ref got this one right. The Dutchman went down very quickly following a poor piece of control and a brush from Plymouth’s defender; it would have been a soft penalty in my opinion.

Remember what I said about Kalala being good? Well, he proved so again in the second half. A silky counter attack resulted in Duku steaming through and sliding a ball through to his team-mate. Kalala’s finish was as cool as you like, slipped into the bottom corner. A brilliant team goal.

And that was it. The pasty-enthusiasts had pootled up the A38 to watch their side eclipsed by their Yellow cousins. It was an encouraging performance from Johnson’s men, while Ryan Lowe will have sat on the coach watching his second eclipse of the night – this one non-metaphorical – with plenty of thinking to do.

I find myself reminding myself and everyone who says anything positive that it’s “only a friendly.” And it is. And that means we should put a lid on every ounce of excitement we feel about the upcoming season. HOWEVER…we were very good tonight against a semi-decent team and there is justifiable encouragement to be taken.

Shaun MacDonald 7 – Made some really good stops, also spilled it once or twice. Wasn’t actually that busy. A decent display; giving Johnson no reason to look past him for the number 1 shirt.

Jean-Yves Koue Niate 7 – Solid too. Rarely troubled. Made some good blocks and interceptions. Good in the air. Whisper it quietly, I think he’s good enough to start next season too, though cover/competition would be welcome.

Kyle Cameron 7 – Also good. He and Niate might have closed the Argyle forward down for their goal, but other than that they kept the League Two attackers quiet.

Frank Vincent 7 – Sorry to sound like Len Goodman, but it’s another seven. Outside his natural position, Frankie looked very competent and hardly put a foot wrong. I expect someone who watched him more closely and has a more astutely trained tactical eye may have criticised his positioning at times, but he looked solid enough to me. Good to have another option to cover for Liam’s injury.

Kalvin Lumbombo-Kalala 9 – What a player. What a performance. My man of the match. Absolutely terrorised every defensive Argyle player Ryan Lowe threw on. His feet are just fantastic and he took his goal extremely neatly. At times he galloped through the centre of the field like an antelope in the savannah, but not an antelope being chased by a lion, more like an antelope out on an afternoon trot. So graceful, so relaxed, so composed, so steady. The only nit I’d pick with the young Frenchman (who will henceforth be known as “The Imperturbable Impala” by me alone) is that he was simply too good against a team that probably could afford to buy him.

Armani Little 7 – A mixed game for Armani. Their goal was his fault. I also think he gives away too many fouls in the middle of the park, which may get frustrating if it happens every week. However, his passing range is sensational (honestly, like, as good as you’ve seen at Plainmoor) and that free-kick was sublime. I’m excited to have a proper set-piece taker again.

Asa Hall 7 – Only played the first half but looked his usual combative self. Lost the ball at times, but he’s a good player. He and Little looked slightly over-run in the middle at times when Lolos dropped back into the midfield to create a diamond around United’s central two.

Jake Andrews 7 – Also only played the first half but had a couple of nice touches and linked up well with Vincent and Reidy on the left hand side.

Jamie Reid 8 – He was really good tonight. Took his goal well but more importantly, some of his build up and hold-up play was superb. Ran Kalala close for MOTM. Serious striker at this level, do not doubt him.

Manny Duku 6 – Feels a bit harsh. He’s got excellent movement and I think the partnership with Reidy will be effective. Also did well for the third goal. However, he could have had a hat-trick tonight if his first touch and finishing were better. Had a one-on-one with Argyle’s ‘keeper but his finish was dribbled straight at him. More to come, I’m sure there’s a good centre forward in there.

Matt Buse 8 – Looked very good when he game on. Really energetic, battles hard in the middle of the park, good passing range too. Looks a real player and I’d like to see him signed.

Ruairi Keating 7 – As energetic as you’d expect. Kicked off the counter for the third goal. Had minimal impact other than that.

Olaf Koszela 6 – Played for ten minutes or so, ran his heart out.

*Check out the new TorquayTalk Podcast from Marcus Arscott and Sam Druiff:

Episode 1 is now live! We give a brief introduction to ourselves and TT, then talk about the Bideford and Buckland pre-season games. Please send us any feedback or suggestions. We hope you enjoy!

Find us on Spotify here: https://t.co/YeZoWX1REl