“I miss Plainmoor. Drinking too much before, during and after the game. Permitting my undivided attention to just one thing for 90 solitary minutes a week”

TT site developer and traveller Luke Hunter blogs about life ‘down under’ and TUFC: 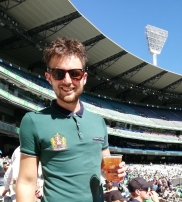 I’m flattered Dom has asked me to pen this piece and hopefully it resonates with a few readers, whilst at the very least plugging one of TT’s gaps through the long summer.

My “brief” (TT doesn’t really operate on a ‘brief and deadlines’ basis but it does sound professional…) is following United whilst travelling. In essence, the two fundamentally go hand-in-hand, Torquay is far away from just about everything. To support Torquay is to travel, though in this ever shrinking and vastly changing world, the scope of doing both has drastically changed.

I’m not particularly old (if I do say so myself) but the memories of (what I now consider, prehistoric) dial up internet and teletext sit firmly in my mind – the way I followed the club just 15 years ago will be an alien concept to those supporters springing up behind me. These days, connectivity is beyond comprehension. I have almost everything other than a live TUFC match experience at my finger tips, however as I’m sure most will testify, it isn’t *really* the same.

I sometimes find it difficult to talk about travelling, it’s a thin line between sounding inspirational or self-righteous. I’m always keen to stress the sacrifices and hard work that has allowed me to do it. This particular trip has lead me to Australia, hardly the distant unreachable outpost it once was, but pretty far. Travel, like football has become so much more accessible. I met a park ranger a few weeks ago who grew up less than five miles from me, he left the UK on a four week voyage 50 years ago and has been back just twice – Skype is understandably a game changer for us both.

I’ve temporarily settled in Melbourne via Southeast Asia, Taiwan and India (I was home for Christmas but didn’t make it to the bay due to a pretty severe hospital-inducing bug I picked up in India…). Let’s just say I didn’t head south, but a large chunk of my body mass did. As I write, I’m coming to the end of a truly incredible trip within a trip, camper-vanning in Tasmania – there’s many things I’d recommend, but this is in my top three. I wrote half of this about 20km from the nearest ember of civilization in a national park packed with pelicans and wallabies, under the clouds of the milky way, with goon (very, very cheap wine) by the litre – okay, perhaps a little self-righteous, but how cool is that!?

Cheap drink aside, I try hard to avoid the trend of 21st century millennial ‘gap year’  travellers. My primary interest is travelling conscientiously for wildlife and wilderness, sport and cycling comes in alongside that, which thankfully tends to send me down a different route to those mentioned prior. Australia is endlessly rich in these; for example, you would be hard pressed to find the levels of easy access isolation that some of the national parks here offer elsewhere. I choose to do this and as epic as these experiences are, they’re not without sacrifice.

One of those sacrifices is undoubtedly Torquay United. There is nowhere in the world that does football like the English. I don’t think the parallels we draw between football and religion are under-stating the subject, I long for it when I’m gone. For as much as I love an open road, the hardest time to be away is *always* 15:00 on a Saturday afternoon GMT/BST. I’ve woken up in the early hours every single time Torquay have played – there’s something in my psyche that has to be present and in the moment as best as it can be. Woking was particularly difficult, I messaged my best mate at the equivalent of 10am, knowing full well that had circumstance been different we would have been London bound together, already a few pints deep. But that’s it, it’s not *just* the club – it’s the social aspects, the family and friends that we share it with.

I miss Plainmoor. Drinking too much before, during and after the game. Permitting my undivided attention to just one thing for 90 solitary minutes a week. Moaning, adoring and singing. I miss coming away from distant cities/towns/villages, looking at every coach you pass to see which team it belongs to. We’ve probably lost but on that odd occasion, knowing you’ve stolen something from somebody else’s domain. I miss creepily taking pictures of Dom in BB from the Pop. I miss how my Dad is always right and I’m always wrong. Paul Bastard and his lunchbox. I miss spoons on a match day, oh wow, I miss spoons always.

I’ve picked a good substitute. Melbourne is undoubtedly the sporting capital of Australia. Thankfully cricket and rugby (league) are crowd-pleasers here, which as a big fan of both, at least satisfies a few of my sporting interests. That’s without mentioning the MCG – it is an absolute epic venue no matter the sport. Football (“soccer – URGH”) probably slots in somewhere between those two in terms of popularity/attendance and is generally hosted at AAMI Park or the (count your Launa Windows blessings here) Marvel Stadium. The two ‘big’ (A-League) teams are Melbourne Victory and City; City being part of the ‘City Football Group’ along with Manchester and New York. My adopted team from a Macedonian community, Pascoe Vale, frustratingly sit in a divisional structure that I struggle to accept – one without promotion – though following a few good years, my support has of course seen them struggle this time around anyway. The real buzz in Victoria, and indeed some of the other states is ‘footie’ or AFL/Aussie rules to us outsiders- it has grown on me, but (whispers quietly) it’s just not the same.

One thing that is noticeably similar, however, is the endless duplication of town names. I’ve camped in both Sheffield and Cowes recently whilst also driving through Exeter,  Brighton and St Helens, to name just a small few. Our ancestors obviously felt inspired by home but I can assure you St Helens (Tasmania) bears absolutely no resemblance to the English namesake. Most notably, to the South West of Melbourne, sits Torquay (Victoria) – a place I very much intend on visiting. Naturally, that would have been my first choice for an Aussie football team to support, but their amateur outfit “Surf Coast FC” (Seriously, how Australian can you get?) are very much below even the standards i’m familiar with.

Alas, I represent the club as best I can on my travels and you’d be surprised just how far flung our little club from a corner of Devon can be. My Torquay shirt has flagged me to a Dawlish resident in San Diego, a Grecian in Sri Lanka (we shared a solitary head nod…) and just a few months ago a Dulwich fan at an Australian second division game, the night before we played them.

Having become so accustomed to losing, it’s felt somewhat typical that the season I’ve missed has been such a good one. I certainly didn’t think it would be at Gloucester as a paper cup flew so purposefully at Gary Owers head. In fact, I was quite sure it was going to be a good one to miss. Gary Johnson scuppered that for me, but I don’t mind. One of the TT gang put it perfectly by saying that the season just gone was for those of us who have suffered but stuck.

Fortunately, absence makes the heart grow fonder and the prospect of being back on the pop in the near future is irresistible.

From the other side of the world, COYY.

One thought on “He Blogs From a Land Down Under. Luke Hunter Checks In.”