A dreich and dreary skyline with swirling rain did not put the dampener on the Torquay supporters at windswept Plainmoor, as Gary Johnson’s Torquay United swept aside an in-form Dartford team and put in a performance full of character, strength and application.

The game began scrappily (unsurprisingly considering the weather conditions from kick-off), with Dartford playing towards their travelling support and Torquay keeper Shaun MacDonald struggling to make any kicks reach the half-way line against the strong winds. That uneventful opening soon changed however on the 13th minute, with a contentious red card for Torquay defender Jean-Yves Niate as he appeared to clumsily tussle for the ball with the Dartford forward. Both appeared to slip over without any meaningful contact just outside the box, but after conferring with the linesman, the referee showed the red card and an early bath beckoned for the unwitting Torquay defender. A hasty tactical change ensued from GJ and the unfortunate Keating was replaced by Jamie Sendles-White.

The game ironically then came to life. Extra urgency from the Torquay players, some nice attacking moves and some eye-catching wing trickery from Kalala – then the breakthrough. An attacking move saw the ball fall at the feet of Jamie Reid, who hit a sweet shot past the Dartford keeper (and numerous defenders!) to send the home fans wild. Both Janneh and Kalala had good chances to extend the lead. Then more controversy as another sweet build-up and attack saw a Janneh cross stopped by a clear use of the arm by a Dartford defender. Everyone in the ground, including United players implored handball, but their claims were completely ignored by the referee. A huge penalty appeal waved away by the smiling whistle-blower. Decisions like this very often impact on a game and certainly some vociferous voices were aimed at the referee as the teams and officials walked towards the tunnel. A talking point for half-time along with Woking losing at Welling.

The second half started as lively as the first had ended, with both Janneh and Kalala stinging the Dartford keeper’s palms, but soon after there was a let-off for Torquay as the ever impressive Lemonheigh-Evans cleared a fierce shot off the line.

On the 60th minute the tiring Kalala was replaced by Dickson and minutes later some lovely passing play saw Janneh’s ferocious shot parried by the keeper, only for Reid to sweep in the rebound at an angle. 2-0 and a resilient performance, rewarded with a deserving score-line.

The combative war-horse Asa Hall – who had a terrific game and received a standing ovation from Bristow’s bench – made way for the Bournemouth loan youngster Frank Vincent on the 80th minute and he immediately got involved in the game, sweeping the ball out of defence, tidying up and showing signs of why Gary Johnson wanted the young player in his squad.

With five minutes added time, United comfortably saw out the last knockings; even finding time for a surging Liam Davis run and cross that evaded Reid. Eventually the referee blew for the end of what was a most satisfying result. A performance full of strength and character and whilst the attendance may have been slightly blighted by the 6 nations rugby, a crowd of almost 2,300 left a soaked and sodden Plainmoor feeling rightly elated. Not even a late, late Woking goal over in the South-East of London to prevent Torquay retaining top spot in the NLS could spoil the mood of what for me was one of the finest performances this season, especially taking into account the strong opposition, the sodden conditions, the poor refereeing and playing with 10 men for 75 minutes. A consummate team performance.

MacDonald 7 – Surprisingly not too many saves to make but he was steady.

Wynter 8 – Played with confidence and assurance.

Davis 7 – Solid and even got in one of his mazy runs in the second half.

Niate 5 – Red card and an early bath for the Frenchman.

Cameron 7 – Solid and dependable as always.

Hall 9 – A typically busy performance and very nearly my MOTM.

Janneh 7 – Difficult for him to get a hold on the game, two wayward shots, but always good movement and finding space.

Lemonheigh-Evans 8 – A driving force in the midfield and a lovely player.

Reid 9 – Lovely first goal and well placed for the second. Never stopped running and his hold-up play was a joy to watch. Terrific game.

Keating 6 – Subbed before he could make an impact..

Kalala 8 – Trickery from the wing-man as usual and always a danger.

Sendles-White 7 – A very good performance from the defender.

Dickson 7 – Looked sharp on his arrival off the bench.

Hard working performance from the Yellow Army. Such a difficult game with so many variables but the 10 men held firm. The promotion push continues!! #tufc pic.twitter.com/tpEwg0xZqB

Man of the Match: Jamie Reid

So many good performances! Solid and tireless Asa Hall, the sweet trickery of Kalvin Kalala, a very impressive Lemonheigh-Evans and a shift and a half from Ben Wynter. But once again my choice is Jamie Reid, showing that my prediction about this being ‘his season’ has been proved correct. He was superb again.

Frank Vincent was only on the pitch for twelve or so minutes, but in that time he showed some lovely touches, broke up Dartford play when they were still pushing to get something out of the game, never misplaced a pass and really does look a promising player for the future. I have thought of him as ‘lightweight’ in previous appearances but he looked assured today.

Going down to 10 men so early in the game, the natural switch bringing off an attacker in Keating and bringing on defender Sendles-White, but the Gary Johnson way is to create rather than sit back, and most importantly push forward at every opportunity.

Dartford looked a compact side with a a physical midfield, but I was surprised after the sending off how they didn’t capitalise more. But then so often 10 men teams are galvanised as was the case today and Torquay didn’t allow them to get a grip of the game at all.

He was poor. Missed a blatant penalty decision and for me, common sense should have prevailed with the weather conditions affecting Niate and the Dartford forward slipping over.

Ironically the sending off of Niate. It seemed to propel Torquay Utd into action, an injection of driving forward passing football.

Niate is most fans preferred choice to partner Cameron at the back but his performance after the red card incident was confident and assured. He settled in quickly and played extremely well.

This was for me proof that Torquay United do have that strength of character when adversity calls. The toughness is there, the team spirit is strong and while Woking may have lady luck on their side, we have Gary Johnson on ours and a collective bunch of players who can rise above and play their way out of this league in some style. Up the Gulls! 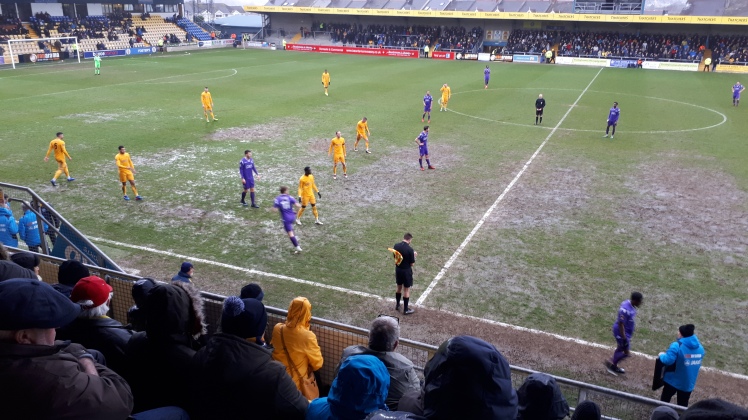 View from the Ed:

This is the stuff that champions are made of. Going down to 10 men so early could have easily seen United wilt under Dartford pressure and suffer defeat at a horribly windswept Plainmoor. Instead ‘the Gulls’ stood up strong, puffed their chests out and made a mockery of being a man light (I thought it was a red card), thoroughly deserving three points for their efforts. This was another day to laud the managerial majesty of Gary Johnson, imploring his charges to go forward rather than retreat – being brave and take the game to the opposition. Our will (along with our ability) was simply stronger than theirs and of course in the form of a razor-sharp Jamie Reid, we have the best striker in the NLS to apply the finishing touches. It also helps having the pace and flexibity of the likes of Janneh, Kalala and Lemonheigh-Evans to stretch the opposition, whilst players like Sendles-White (having his most impressive game in a yellow shirt) and Wynter were rocks at the back. We may have thrashed various teams this season, but this was a result to match any of those and with this squad truly playing for each other, we head into the last eight matches in rude health. COYY Dom

Another important win today, we stick together and keep going, great support as always 💛 @TUFC1899

Dartford fought hard but a Jamie Reid brace ensures the points stay by the seaside.

Safe journey home to all those from Dartford. Your support was brilliant as always ⚫⚪
(2-0)#DartsFC #TORvDAR 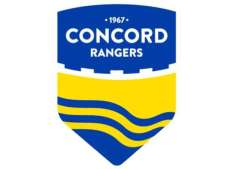 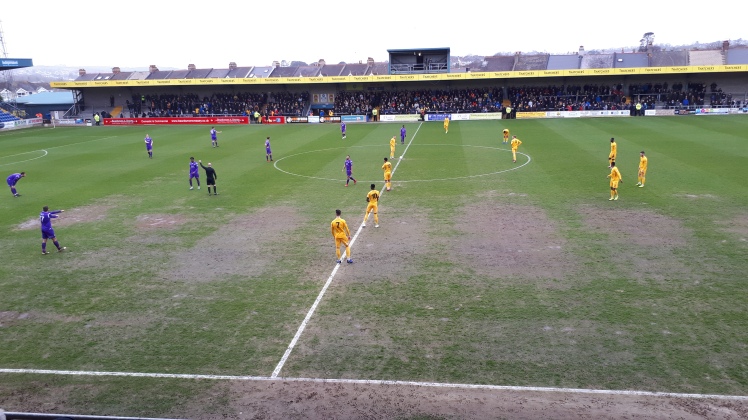