Win games and they will come… When ‘TUFC 2017-18’ whimpered to a pathetic end and the club appeared down on it’s knees with under-achievers Owers and Harrop at the helm, one of the inevitable questions was “will supporters still turn up for regional football?”. Well the answer is emphatically yes! 1400 tickets sold in 8 hours this week for the ‘Battle of Kingfield’ just illustrates how much the Yellow Army are engaged in their football team. The old cliché ‘success breeds success’ has been triggered by the arrival of magic man Gary Johnson and we all want to be part of it as the season builds to a rousing crescendo.

I love to see this type of fever for what’s to come, but the ticket sales this week weren’t exactly the club’s finest moment. There was always going to be high demand for this fixture, anyone who visits social media or the forums could feel the clamour and anticipation weeks in advance of the sale. 1400 would never be enough for the Yellow Army and so it proved. What surprised and disappointed me was the lack of a priority sales period for season ticket holders or at the very least a maximum allocation per purchase. Instead it became a mad scramble/free-for-all on Monday and Tuesday, with inevitably only one chap stationed on the phones.

What was the mad rush to sell these tickets? With most people stationed at work on a Monday, it meant die-hard supporters stuck on the phone for ages trying to connect – whilst others may have missed out altogether. Surely a couple of days could have been allocated to season ticket holder sales and then the rest sold in the days after – that’s usually been the case in years gone by (yes it has been a while!) and is a regular practice utilised throughout the football land. To be clear I don’t want anyone missing out, but this massive match should have demanded more consideration and planning from the club’s hierarchy. Are they concerned about showing their most committed supporters that they are truly valued? By the looks of the sale organisation – No. Just get the money in guys – it doesn’t matter who from. Rant over (and yes I have got a ticket!).

AWAY | Our allocation for our away trip to Woking Tickets has now SOLD OUThttps://t.co/W8iyyyDDB6

When the team is winning, then it does paper over the cracks of the typically unorganised TUFC admin that remains in place – probably for the best with our threadbare staff. And last Saturday was an away day when United stood tall and showed that we are still the team to beat in the NLS. Two delightful finishes from Kalvin and Reidy brought home the bacon from Essex. Two splendid side-footers that were perfectly placed past old foe Alan Julian, into the only area where they would ripple the net. Sighs of relief (and drinks) all round.

Reidy’s cupping of ears in front of an infuriated Ricay crowd has given the Yellow Army much joy this week. In hindsight it was risky (2nd yellows have been shown for less by more sensitive officials), but Jamie clearly couldn’t resist rubbing their noses in it – winding up Julian and an entire Ricay fan base in one celebratory swoop. The legend of Reidy grows by the week and the main man is revelling in it, just make sure you stay on the pitch Jamie!

I said last week about working hard on that defence and it was an afternoon when Kyle Cam and the boys did the business at the back. Keep clean sheets and we will win this league; I know that sounds very simple but it’s true! We will always score goals, GJ’s United just have too many weapons in their armoury not to. Shaun MacDonald must have had a warm Geordie glow after a clean sheet – he’s had some nervy moments along with the rest of the defence in the last few weeks and any goalkeeper takes confidence from keeping the opposition scoreless. It’s a solid platform to build on for the run-in and regaining the same focus in every match should be our aim.

The decision to place Kalvin Kalala on the subs bench did seem a gamble from Gary Johnson and as the minutes ticked by, I have to admit to apprehension at the lack of chances United were creating (Ben Currie will vouch for that!). But I was silly to doubt the gaffer as the subs came on at exactly the right time and made exactly the impact we craved. That’s the skill of a top boss, managing the game for your team and taking the right decisions to exploit the opposition – Gary knows best! The happy scenes from after the match showed just how much 3 points meant to the gaffer (and just how much he loves football!) – the loss at WSM piled some pressure on getting a result and telling the rest of the league we’re still very much at it – mission accomplished.

The other sub Ryan Dickson was mentioned in my blog last week, as I debated his lack of action in a yellow shirt since Sir Gary’s arrival. It was therefore nice to hear from Jonny Jones that RD’s presence made a positive difference. I’d imagine Ryan would walk into any other team in this division, such is his experience and quality. Maybe, just maybe he’ll have a major part to play in the remaining fixtures and finish the season with a  flourish. Any decent team has to rely on a squad of players, and with the likes of Andrews and CLE having difficulties finding top form, Ryan’s sweet peg is a more than useful weapon to turn to.

Going back to Ricay I was surprised to hear about how little threat they offered going forward, especially with Jake Robinson arriving back at the ‘AGP Arena’ with a laughable Bond-type GIF on the Friday. Let’s be honest, who expected Ex-Gull Jake to rifle one past Mac on Saturday right in front of the Yellow Army? No me neither!!!  In the end it was a scrappy and largely forgettable game where United’s extra skill and full-time fitness won the day, and yet another 2-0 away win was etched in the 2018-19 record books. Was it a defining victory in our season, we’ll soon know. 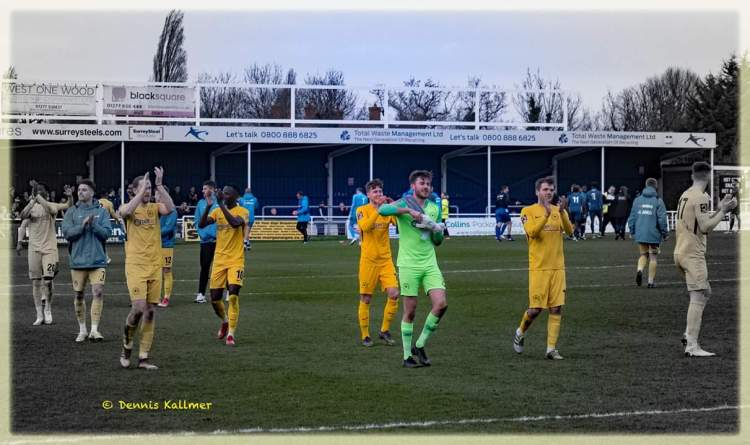 This Saturday we should be back in action at Plainmoor against play-off contenders Dartford FC. I say should, due to this ongoing ropey weather that could threaten our footballing weekend again. Ideally we do not want any more re-scheduled Tuesday nighters clogging up the end of the campaign – it just makes our challenge a little tougher. Darts supporter Steven Kennedy will be answering questions on his team for TT, and they will harbour hopes of causing at upset. With lowly WSM taking home the points two weeks ago, it is clear that slipping standards are punished even at this level and we could do with turning on the old razzle dazzle. Three points is what really matters of course, but a thumping victory would be a proper sign of intent – we are due some fireworks after all.

Stop Press – Ben Gerring and his Woking posse are not going away easy. A controversial looking 96th minute winner at Oxford City gave them a valuable win last night and 1st place in the table. The updates on the second half appeared to be non-existent last night, such was the lack of information filtering back I had thought for a moment that the game had been called off. But no, the Cards dug out something in what can only be described as Fergie-Time – scoring in the 6th minute of 4 minutes of added time. Say what you want about them but this Woking team have character, so the fight for this 1st place could be fought right to wire (I’m still convinced we’ll have the knock-out punch).

This NLS rivalry continues to be played out on social media, with the Woking Twitter guy quick to tweet a post-match GIF aimed squarely at United supporters. It’s been a while since we’ve experienced such regular antagonized banter with opposition supporters. In recent seasons the main response to our situation has been sympathy – a pat on the back and a ‘hope you stay up’ as we trudged depressingly away from Plainmoor after another defeat! From being the hunter to becoming the hunted, we are the biggest fish in this pond and I am sure they would love it Kevin Keegan-style to beat us for the title. This 6th April match-up is bubbling up very nicely isn’t it! I just hope the Chelmsford fixture rearranged for the 2nd April isn’t swallowed up in the build-up. One game at a time boys…

FINAL WORD – You may have noticed some wonderful photos that have been popping up on the TT site recently (no I don’t mean my variable camera-phone snaps from Bristow’s!). Yellow Army Facebooker and keen photographer Dennis Kallmer is a regular at away games and has kindly agreed to let me use his fabulous work. The captured moment of Ben Wynter and Gary Johnson serenading the Yellow Army at Billericay is an absolute beauty (see below) – the master and one of his apprentices savouring a sweet victory = perfect. If we’re allowed to this Saturday, let’s get behind the lads once again and push that attendance close to 3k. The rumours of TUFC’s demise was just that. With the best manager and the best striker in the league leading the charge, plus the Yellow Army fully on board – we will take some stopping.