The Billericay Town game was pretty much everything I expected on Saturday. Goals; incidents; talking points; cards; bad tempers and more. We were coasting it first half and I was surprised at how lame the away team were, as we cut through their defence at will. It looked a case of how many we would win by and we all felt rather pleased at half-time in Bristow’s!

Unfortunately ‘the Ricay’ woke up in the second half and at that point we had to roll our sleeves up and hold onto our lead – it just didn’t happen. Gary is still getting to know these players and he was clearly annoyed at the lack of courage in that horribly disjointed 45 minutes. If we want to be top of the NLS tree come April, then we must react more positively when the wind changes in big matches – dig in and win the battle is the name of the game.

I’ve actually seen worse antics from away teams than Billericay. Steve Evans and Crawley were a very good side around 2009-2012, but they were vile in every respect. Using trick after trick to get under the skin and intimidate United on and off the pitch; usually it worked. Ricay time wasted and tried to influence the referee no doubt, but it’s our job to rise above this behaviour. By the time the return fixture rolls around in March, I expect to see a tougher mind-set from Gary Johnson’s XI and 3 points return to Devon.

Out of the talking points in the clash of the NLS titans, the Reidy booking in the 1st half has been widely debated this week. The Ricay fans have called him a cheat and even laughably asked for a 6 month ban! Now the replay doesn’t look pretty and it’s an ungainly fall by the striker – but Jamie was quick to take to Twitter and make light of it. No dive says TT’s October Player of the Month and that’s good enough for me. Case closed and we move on.

The second booking for the Ricay guy did look soft on Saturday at first glance and the replay agrees. It was a robust challenge but the ball was won. I think the referee had long since lost control of the game; with unnecessary bookings handed out, monumental time wasting left unpunished and both teams blood boiling at his indecision. In the end United just couldn’t get their act together – when we needed cool heads to get the ball down and create chances, only CLE looked the part. It was a day when Gary would have loved a couple of difference-makers on the bench to chuck into the fray. Instead it was only Brett and it was far too physical a game for him to make any impact.

The fall from grace for Brett Williams at United is pretty substantial considering he was only made captain three or four months ago. I think Brett could still prosper at this level, but he requires the team to play to his strengths. Gary Johnson’s ethos is for fast attacking play, with pace and movement the order of the day – that’s why Reidy has prospered in recent weeks and Brett has been….sat on the bench. The striker may be deemed surplus to requirements as GJ rejigs the squad for a promotion push, we shall see.

One guy who was missed big-time on Saturday was Opi Edwards. Opi had a brilliant October and the pace and skill he gives us on the right-hand side could have won us the game. His replacement on the right Ben Wynter actually had one of his better matches in a yellow shirt though and I was glad to see Ben Currie mention this in his match verdict. An injection of aggression, strength and confidence into Wynter’s game could turn him into the proper player. Gary will have to decide whether he is worth persevering with, but Ben’s only a young lad and I think there is potential for him to shine.

The big games keep coming and another of the NLS pace-setters Woking FC visit Plainmoor on Saturday for the cup clash. No time to mope over the dropped points against WSM and Ricay, this is a massive opportunity to advance to the 2nd round proper. With Opi and Jake Andrews both likely to be back in the squad, I’m optimistic of our chances. We bossed much of the last game versus the Cards, but just weren’t clinical enough to put them away. They’ll come wanting to have a go and I’m really looking forward to an open game. Getting in the hat for Monday’s draw would help put United back on the footballing map, and who knows we might even pull out somebody exciting! 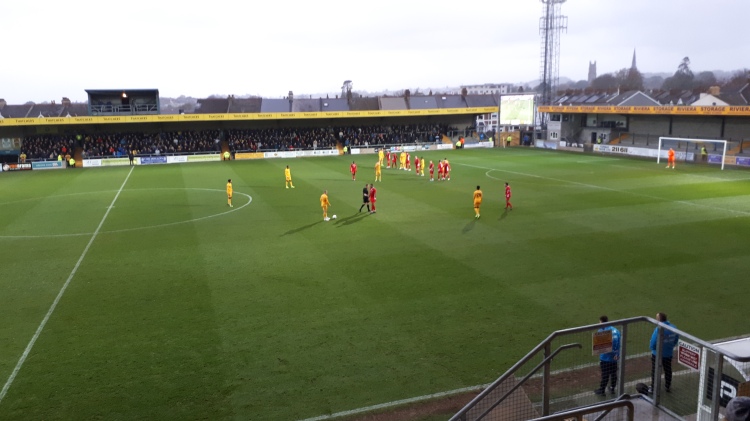 One man who won’t be attending TUFC games any more in an official capacity is of course Geoff Harrop. The announcement of his departure last week was met with more universal cheer than most United goals! He states that United are in a better place than when he joined, which considering we have been relegated to the lowest league in our history must be a joke!

Geoff’s credentials when he arrived were mainly based around youth development and that’s the only area where I’ve seen improvement; how much of that was actually down to him is debatable. His one big job involved hiring a manager last September and as we all know that was an epic fail. Again this decision probably wasn’t totally his, but he was the one making statements about finding the right man and has to shoulder the blame for an appointment that was an unmitigated disaster.

When the spectre of relegation loomed larger and our fate was sealed, where was our General Manager to speak to the fans and tell them how the club would bounce back? Where was our General Manager to support his team’s manager? Nowhere. Instead Gary Owers faced the music mainly on his own, whilst it was left to Clarke Osborne to make fanciful promises of immediate promotion back to the NL. Promises that appeared ridiculous, until he hired us a proper manager!

In the end it seemed like Geoff had been usurped from his main duties by Clarke’s man George Edwards, and his position of GM had become redundant. It was poignant that when the club’s open day was held, Geoff was again nowhere to be seen. This clearly wasn’t a man Clarke trusted to communicate with the fans and more importantly run his football club. I was frankly glad to see his time at the club come to an end.

FINAL WORD: The recent troubles caused by some pesky United fans at WSM were nothing major, but these incidents have become somewhat of a common theme in recent seasons. The stewarding in Somerset was minimal and they definitely weren’t at all ready for 1200 fans, but that doesn’t excuse silly behaviour from a small minority that shames the rest of the brilliant Yellow Army. Unsurprisingly much seems to stem from the frustration of not winning games. We may be the biggest fish in the league, but we have no divine right to take 3 points each time – we’re far better sticking to what we do best and support the team. Let’s get Plainmoor rocking again in the busy couple of weeks ahead and help push this ‘work-in-progress’ team on to bigger and better things.

Three important games coming up at Plainmoor You can buy in advance (but also pay at the turnstile) for our #EmiratesFACup match against Woking by visiting the website. #tufc