Well, into my second season at Torquay Talk, I finally get a competitive win! Torquay go into the 1st round hat for the first time in what seems an eternity. A comprehensive win against Winchester City saw United progress.

Winchester started how I thought they would, 10 men behind the ball and getting as many men back as possible. Torquay had the upper hand from minute one however, coming close on numerous occasions early on. It was tricky working out who was who as I haven’t seen the team as often as I’d have liked recently, but also because the team all wore completely different numbers. I was very confused as to why they had done this, but I have had it confirmed by one of our players it was to confuse Winchester with set-pieces! Clever.

United lining up in a 4-4-2 formation took the lead 37 minutes in as home debutant Kalvin Lumbombo-Kalala’s shot from the edge of the area was deflected into the back of the net. It took only four minutes for number two; a slick passing move saw Saikou Janneh head home to score his first goal for the gaffer. Then right on the stroke of half-time, the Gulls played some quality passing football to give Connor Lemonheigh-Evans the chance to put the yellows into a three goal lead.

Only ten 2nd half minutes passed before Connor Lemonheigh-Evans doubled his tally for the day and put United four goals to the good. A few more opportunities came Torquay’s way, including a curling effort from captain Asa Hall but that was Torquay’s lot. Then on 71 minutes, a moment of madness from United ‘keeper Shaun MacDonald saw him try and beat a Winchester player with the ball, but to end up losing it and taking down his man to concede a penalty. Hayward converted the penalty (not sure if he’s related to ours). Brett managed to send a ball all the way to Babbacombe beach with a wild effort, but the score remained and Torquay are in the 1st round proper. 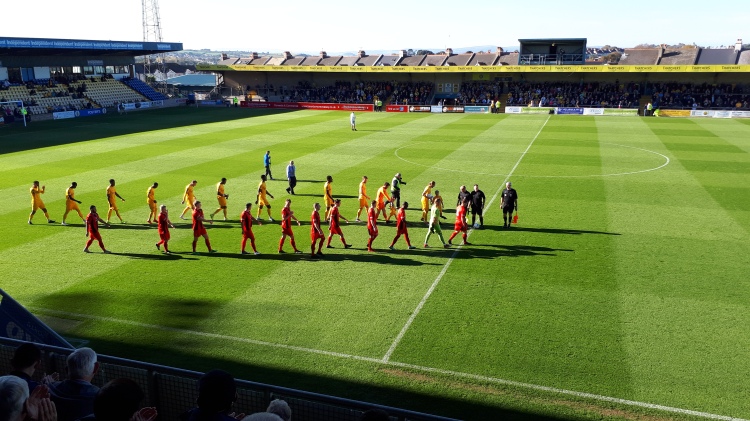 MacDonald – 3 – May seem a bit harsh but a cruel lesson to the youngster, luckily we were in the driving seat, but I don’t want to see him try anything like that again.

Essuman – 7 – Didn’t really put a foot wrong but didn’t look massively comfortable on the right side of a back four. Certainly a position that needs attention for me.

Koue Niate – 8 – Big fan of this man! So solid and doesn’t let much past him. Great partnership with Kyle Cameron at the back, my first choice back two.

Davis – 6.5 – Quiet afternoon for Liam Davis as he didn’t have an awful lot to do defensively but didn’t have a great afternoon going forward. Still, can’t criticise what he did do.

Edwards – 8 – Does he have Velcro on his boots and the ball? The boy has a better touch than any other player I’ve seen this season. Great going forward and offered a lot to the front line.

Hall – 8 – Combative display from the skipper again. I think what makes Hall stand out is the fact that he’s Johnson’s man on the pitch, a senior pro who is the link between the team and the manager. Asa isn’t the finest footballer we have but he does make a lot of difference. I can see why he got the sponsor’s MOTM vote.

Lemonheigh Evans – 9 – Brilliant again, fresh off the back of his Wales U-21 adventure, Connor popped up with two more goals for the yellows today. One of the things I really like about him is the fact that he is always looking forward with the ball.

Kalala – 8 – Would have been a nine but for coming off slightly earlier. Not sure if he’s more of a wide player or a striker but playing from the left he looked a real threat and certainly deserved his goal.

Janneh – 8 – Good goal. Glad he’s off the mark for us and I think he will score more now. Took a shot that went for a throw but played really well and much like Kalala was a constant threat all game.

Reid – 8 – No goal this week for our Jamie, but set up Janneh’s goal. Worked so hard all day and had a few chances to score. Linked up well with Janneh, certainly a player Johnson has turned around. I think I even saw him wave the Popside…!?

Keating – 7 – Worked hard, came close a couple of times and deserved a goal, got an unfair yellow card as well.

Williams – 5 – Oh Brett, oh Brett, what’s going on, mate? Didn’t have a shot on target, spooned an effort out of the ground, can’t get a start, when will it end? I don’t see a place in the squad for him any more I’m afraid.

Wynter – 3 – Not a lot of pitch time but still managed his signature move of wasting every crossing opportunity he had.

Man of the Match: Connor Lemonheigh-Evans

Huge fan of Connor’s, I liked him last season; he was the player everyone wanted Dowling to be. I thought he made the difference again, like I’ve previously said, he is always looking forward and looking at chances to create. Good value for both goals. Both he and Hall complement each other perfectly, with Hall clearing up and doing the dirty work, Evans has the license to get forward with the ball to create and get himself into goal-scoring positions.

Could quite easily mention most of the team today, a proper team effort from start to finish, but I want to mention Kalvin Kalala today. He deserved his goal and was always looking threatening. I’m not sure if he’ll be more of a winger or striker but he certainly did a good job of cutting in today. He worked well with Janneh and Reid. 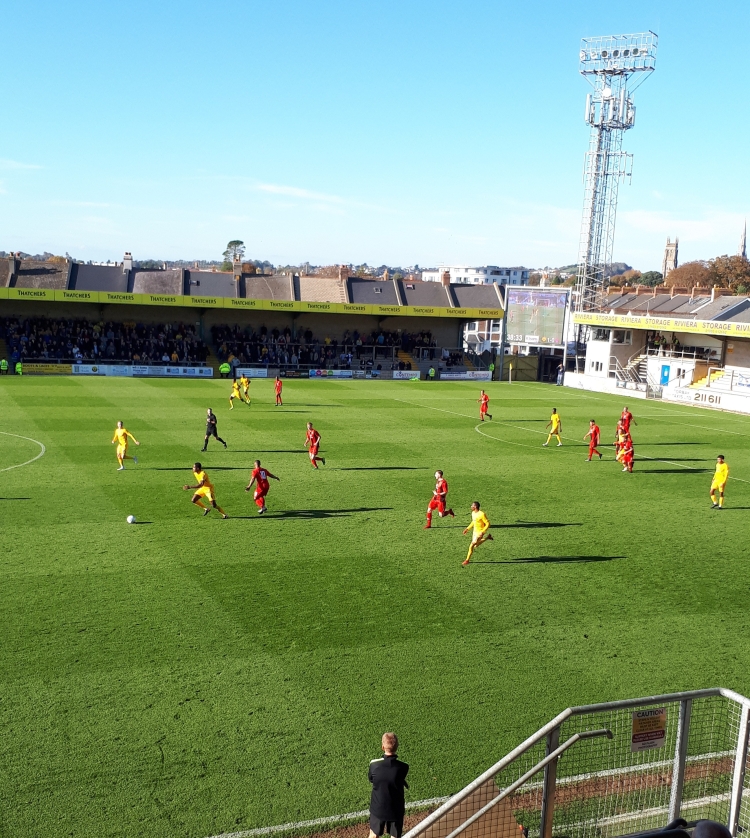 4-4-2, and it worked. I’m not sure about Big George at full back but we have the players for a 4-4-2 line-up. With the wingers pushing forward at times to create a front four. You can see what a change it has made, we can’t stop scoring!

Credit to Winchester for keeping The Gulls out for a good period of the first half but it was men against boys, I’m glad they got a goal for their travels but the poor chap lost his head a bit and managed to get sent off. I was slightly disappointed by a tweet saying it was big time for the club to give them a signed ball.

Pretty poor from the officials today, gave away some really silly free-kicks and the lino on the popside seemed to make a fair few mistakes.

I just keep getting impressed with this lad; I would say he’s the best defender we’ve had since Gus left us. Composed on the ball and leads from the back, if Asa was out I’d have him as my captain. Forming a great partnership with Koue-Niate as well.

You can only beat what’s in front of you, we’re not only doing that, we’re doing it in style. A simple change of formation and a few signings have really changed the mentality of the team. Considering the team had scored fewer than ten goals when Johnson signed on, I think it’s a brilliant run to score so many in recent weeks. A winnable game at Wealdstone next week and then a huge test against Billericay. Hopefully a decent draw in the next round and some more wins in the league! 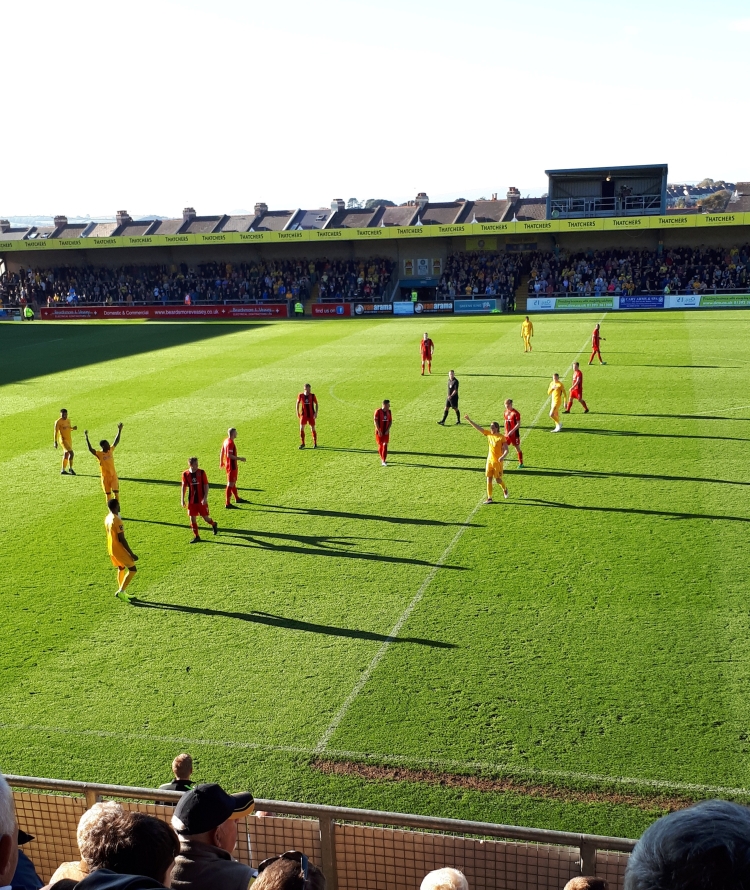 Good teams don’t always play well for 90+ minutes, often they just come alive in short periods and take the sting out of games, that was us this weekend. We didn’t play great and Gary Johnson was quick to say that afterwards. The passing was sloppy at times and Winchester were able to keep us contained reasonably well in the first 35 or so, as they clearly enjoyed the occasion. But once Gary Johnson’s team found it’s cohesion, there were some fireworks. The pace, movement and energy from the likes of Janneh, Opi, Kalala and Reidy is a joy to watch – whilst two-goal hero CLE knits things together nicely in midfield and took his chances well. The main concern? 3 out of those 5 aren’t our players. Gary Johnson may have work to do in the future to ensure his squad has the required quality going forward, but the present XI is a Gulls team to exhilarate and excite. Something we can all enjoy. Dom