TorquayTalk spoke to Brightlingsea Regent captain Matthew Cripps before the FA Cup 3rd qualifying round tie at the Taydal Stadium, and asked him about ‘The Rs’ form, team-mates, life outside football and more… 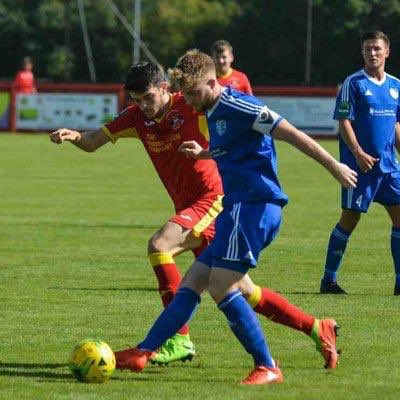 Hi Matthew – many thanks for speaking to TorquayTalk – just how much are you looking forward to this weekend’s big cup tie versus the Gulls?

Hugely! It’s a massive game for the town, club, fans & players. Since the draw was made there’s been a real buzz around the club and everyone is looking forward to it.

What were the 2nd round games like against Egham and did the chance to play Torquay United heap more pressure on the replay?

Personally I wasn’t involved in both games against Egham due to injury which was hard to take but the boys put in a real shift in both games to get the job done. After conceding in the last minute the boys were gutted but they put it right in the replay and were rewarded with a huge draw in the third round.

Tell us a bit about your football career so far and how long have you played for Brightlingsea?

I started playing semi professional football at the age of 16 where I was given my debut at Cornard United. I have had four clubs since then which include FC Clacton, Stanway Rovers, Needham Market, Maldon & Tiptree and most recently Brightlingsea Regent. I am now going into my fifth season with Brightlingsea.

What’s your style of captaincy and tell me your strengths as a player?

This is now my fourth season as club captain having been given the armband by our previous manager James Webster. I was only 22 at the time so for me this was massive as I think you very rarely see someone so young be given this responsibility. I’d like to think that I’m a well thought of skipper amongst players past and present not only on the pitch but off it as well.

What is your professional career outside of football and how difficult is it to juggle both commitments?

I work for a company called AMC Prestige Cars as a car finance broker or many people would say a “car dealer”. My boss used to be a professional footballer so is very understanding with how it all works and the commitment that’s needed at this level.

How’s ‘The R’s’ season been so far in the Bostik Premier and what were your ambitions for 2018-19?

We have had a tough start going into our second season in the Bostik Premier. There has been a few changes to the playing squad since last season so I think it’s taken some of the new players time to settle in. I don’t believe our current league position reflects how we have been playing and I think we’re really close to showing what this squad can do. As I write this we have only lost one in six games which shows we have what it takes to compete at this level.

Which Regent team-mates should we be looking out for this Saturday and why?

It’s never an easy one to answer this and I’m sure there will be plenty of comments thrown around in the changing room but for me personally it has to be Billy Hunt. I don’t think you will see a striker hit the ball as hard as him and he will definitely be a handful for your back four on Saturday.

What’s Brightlingsea like for those who have never visited, and what nearby attractions would you recommend to our travelling Yellow Army (and yes this does include pubs!)?

It’s not a big town but it does have real character. Being so close to the coast the massive attraction for the town is the beach. Along with some very good local pubs a night out in Brightlingsea isn’t a dull one let’s say that!

What’s the Taydal Stadium like as a ground and are you expecting a bumper crowd to support the team on Saturday?

It’s a proper non league ground! With the success of the team on the pitch the club over the past few years have had to keep up off the pitch as well. Six or seven years ago North Road now known as the Taydal Stadium used to be just a local park pitch. We now have over 200 hundred fans walk through the turnstiles every week. It would be great for the club to get a massive crowd on Saturday as they really do deserve it. There’s some good people around the club, so the work they have put in should only be reflected in the numbers we get through the gate Saturday.

United have already an eventful start to the season, but optimism is up with Gary Johnson taking charge – as heavy underdogs what can you do to make life difficult for United?

I think we suit being underdogs. They won’t fancy coming to our ground. It’s a typical non league ground with small changing rooms and a pitch they’re probably not used to playing on. On our day we know we can compete with the very best and I know every one that’s part of the squad and management team is ready for the challenge that faces us Saturday. This is cup football so anything can happen!

So Here It is, It’s actually happening! pic.twitter.com/hk4QEJrJmu

Thanks Matt and I’m expecting a tough game for United on Saturday, all the best for the rest of the season – Dom