(*NOTES – Each position is separated out into 10 games+ and others. Scores shown are the average of the TT Match Verdict ratings out of 10 for all fixtures 17-18)

DR – I feel like the club has let Luke down over the past couple of years. The midfielder signed new contracts obviously believing things would improve, instead they’ve got worse. He played every game of the season meaning his overall rating suffered, but rarely gave less than total commitment for the cause. Young can do it all on his day and banged in a few goals, though with his quality he can do better. If other players had followed his example and were game-ready to scrap then this mess was avoidable. We’re unlikely to see him again; he should be playing at a higher level – no doubt in my mind about that.

SS – Not the player he was before he injures, however, I cannot fault his commitment to this club. A team player, he puts the club before himself. If these Yeovil rumours are true then good luck to him, he will be missed.

DR – Poor Damon. He did ok in the first half of the season, doing his usual thing in front of the back four and trying his best to break up attacks (with varying degrees of success). Those constant injury troubles were never likely to go away though, and the news of his retirement after an injury for Woking was sad to hear. He will be remembered fondly for his first spell at Plainmoor.

DR – Callum was not a terrible signing looking back, nor was he excellent. The midfielder got around the park and worked for team-mates, unfortunately his passing often went awry and he wasn’t likely to score. A utility player who found a space in Macclesfield’s squad, and that shows he was good enough for us!

DR – George arrived on the scene with a bang against Chester and a cracking goal, and followed that up with an excellent game against Wrexham. After that, well his season went pear-shaped as things do at Plainmoor! There was injury, then suspension, then lack of form, a comeback goal and then criticism from the manager and a place on the bench. Character building is what they’ll be thinking at Bristol City! The teenager has promise, but needs to work hard on his game to fulfil it.

SS – My vote for young player of the season. A very talented player, in my opinion, has put in some impressive showings for us this season. If he gets his head down then he can have a good career.

SS – Good player, I liked his attitude. He was tidy on the ball and scored a great goal against Woking. Good luck in the future!

DR – Sam Druiff’s favourite! Mention the name McQuoid to any TUFC fans and there will be look of disgust around the corner. Josh came down from the league to show us how good he was and failed the audition dramatically. The odd decent performance was mixed in with the lacklustre, as he looked lethargic and produced wayward shooting that had fans ducking for cover behind the goals. A player who should have done better.

DR – Ask me who had the most natural talent at Plainmoor last season and I will say Jake. Unfortunately skilful touches didn’t mean much, when a lack of fitness meant a lack of game time – much like Josh G, he’s a player who would have graced our squad brilliantly a few years earlier.

SS – We never gave him a chance. From what I saw he was a talented player who lacked an end product. I believe that a decent run of games and he would have found some great form for us. A missed opportunity this season, it will be interesting to see what he does for his next team.

DR – JMW had a CV that gave cause for optimism, and then he played football. Lightweight and looking uninterested, the winger didn’t give any full-back a difficult time. Another early Owers signing who failed miserably.

SS – He was a better left back than Myles Anderson. Shame he never reached his potential for us, I feel the reason for this lies deeper than ability.

SS – Never got a chance to see him after Nicholson’s departure. I don’t believe this was an issue as I was not impressed by him at all, a nothing player. He couldn’t pass or tackle in Nicholson’s final game.

SS – Well Gary ‘Contacts and Experience’ Owers was in his prime with this acquisition. He looked terrible when he came off the bench before never appearing again.

SS – Very disappointed, really thought he would make an impact, but despite a couple of useful signs, he was mostly ineffective.

DR – Haworth was signed in a rush at the start of the season, and showed glimpses of ability on the wing once his fitness improved. Owers wasn’t impressed though and shipped him out asap.

DR – We waited and waited for a decent forward, and eventually he arrived in the guise of Romain. Elliott’s movement is good (on and off the ball); he’s poached some goals since arriving and also wins his fair share of headers. An all-round player who may lack the pace to frighten players to death, but runs and runs for the team in the hope of making something happen – Elliott has been a welcome breath of fresh air in a stale season at Plainmoor.

SS – He spent his whole career trying to get out of the VNS, doubt he will want to go back there. I loved his work-rate and scored some crucial goals. He will be a good player in the national league next year.

DR – Reidy divides opinion totally amongst the Yellow Army. For all the shouts of derision at a miss-placed touch or pass, there is also encouragement to keep on working hard and running. He is a frustrating player, mainly as you never quite know what’s going to happen when the ball is at his feet and his finishing can be so wasteful. Mentally he’s also up and down depending on how is form is and so often reactive rather than proactive during games. The pace is there, so normally is the work effort – but quality-wise he is just lacking in too many departments.

SS – I am really interested to see how he does next season. He might have been born offside but had a very good spell in the ‘we are not rubbish anymore’ part of the season.

DR – James scored one absolute belter, but apart from that struggled to get going in a United shirt. Not a terrible footballer but lacking the necessary pace or skill to terrify any defence.

DR – We thought we’d seen the end of the Brett conundrum when he left last summer, but back he came for another go to try and inspire another great escape. His return has been mixed; there have been moments of quality at Leyton Orient and at home to Sutton – but also performances where he is not helping the team with his attitude. The guy knows where the back of the net is, but can you count on him all season to enhance the team – it appears not.

SS – Last season, he was one of my favourite Torquay players since the great Tim Sills. I am not going to pretend he has been a success this season as he has been far from it, however, I would still love him next season. If we can get his attitude and concentration fit for purpose then he could be a very key player next season.

SS – A very poor piece of business from Nicho, a 31-year-old way past his best on a 2-year deal at this level is very naive business and seems like desperation. Oh well, could be worse he could have signed an injury prone 35 year-old on a 2-year deal as well.

DR – Ruairi started the season as first choice alongside JPP, but after that (barring a few shoots of promise) it was a season of massive frustration for the striker. Keating will work his socks off, but his end-product when called upon has just not been there. Being in and out of the team hasn’t helped and Owers has never trusted him full since arriving, all that leads to a total lack of confidence. The striker needs encouragement and more importantly decent coaching to mould him, I hope he gets it.

SS – I had high hopes going into this season, and before Owers took over we saw the raw, exciting and hard-working striker we had last season. Sadly Owers hasn’t rated him and he lost all confidence over the course of the season. I am very surprised he was offered a deal, however, he could be an important player next year for us if he stays. 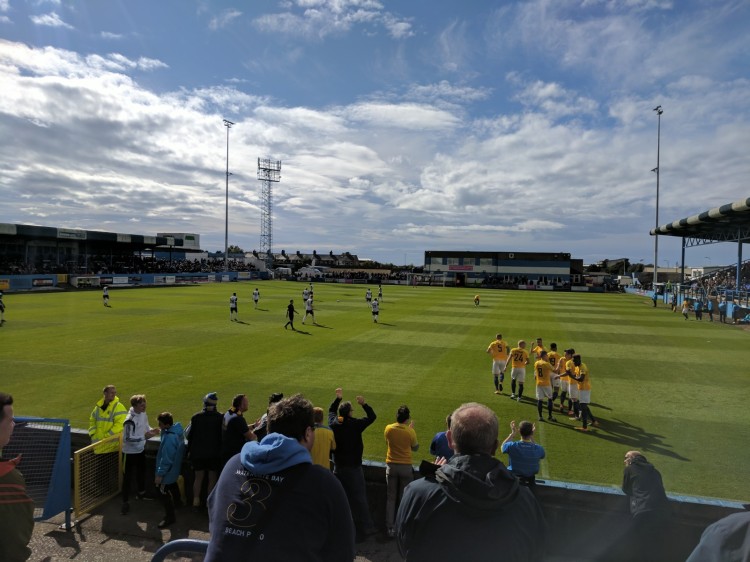 DR – Rhys was a real find at the end of the season, looking every inch a league player and showing the others how it’s done. The firepower we needed all along to sharpen a blunt attack.

SS – A nice gift from Warnock, but all too late. It will be a long time before we see a player with this talent in a Torquay shirt again.

DR – Murphy was a big disappointment. His credentials gave reasons for optimism that goals could flow, but injuries soon caught up him and he never got going in a yellow shirt again.

DR – The signing of ice-cream salesman Fallon was rightly derided. He had nothing to offer for the team and set us up for a season of catastrophe.

DR – Guy took along to time to make an appearance and it wasn’t worth the wait. No impact at all at a time when the team desperately needed a spark from the Frenchman.

DR – Young Alex only played a few games and was not utilised wisely by Owers. He returned to Plymouth sharpish and vowed never to play for Gary again (probably).

TT Player of the Month Roll-Call

DR – “Rhys fully deserved April’s player of the month award. He showed hunger and desire for action, always looking for the ball and had nimble touches to take him past defenders – not to mention becoming our joint leading scorer, despite only joining in March!”

only including players rated in 10 games+ 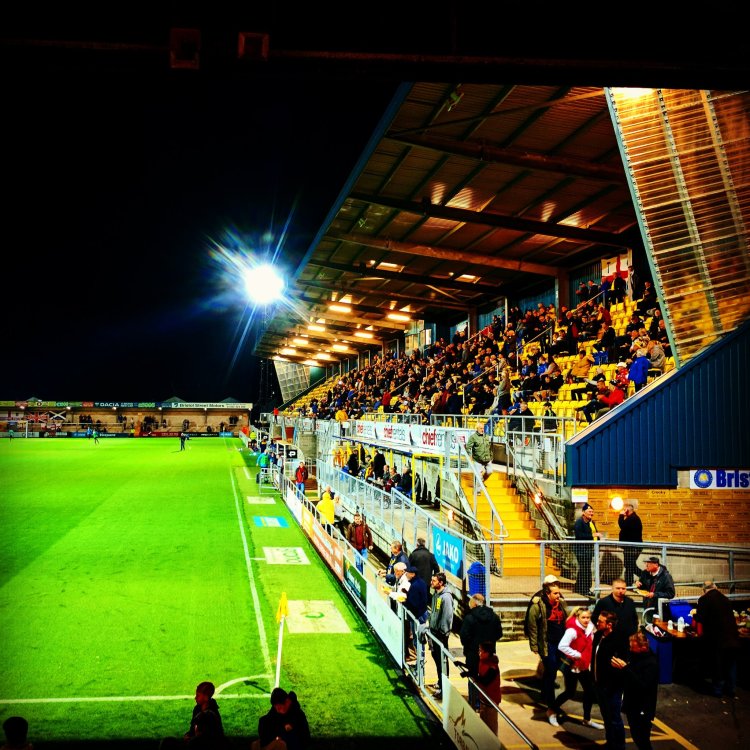 Well done to Elliott, thanks for reading our Match Verdicts this season and thanks to the following people for doing them!