John Jewson is next up on the Opposition Q&A, as he discusses all things Hartlepool in the lead up to Saturday’s match:

Before we talk about your club, tell us a bit about yourself and how long have you supported the Monkey Hangers?

I’m 48 years old, currently employed as a support worker in my hometown of Hartlepool.

Sadly, I can’t recall the date of my first Pools match. My dad would take me and my brother along to the match from an early age, I’d guess 1975 or 1976. They’ve always been part of my life as long as I can remember.

It’s in my blood and I have no intention of walking away from my club, regardless of the league we’re playing in.

You must be fairly happy after beating Orient on Tuesday, how’s your recent form been?

Very pleased to be finally safe from relegation, after beating Orient on Tuesday evening. We were second best for most of the match to be honest. But the players dug in and showed they can grind out a result. Something that’s been very much lacking for most of the season.

There’s been an upturn since Matthew Bates took charge. The 5 match unbeaten run during March, including 3 wins on the bounce proved vital. Although, back to back home defeats to Guiseley and Solihull proved there’s a lot of work to be done and changes to be made before Pools even contemplate a promotion push back to the football league.

Ultimately a big clear out is required during the summer months. And that may extend to Bates himself, despite his best efforts thus far. 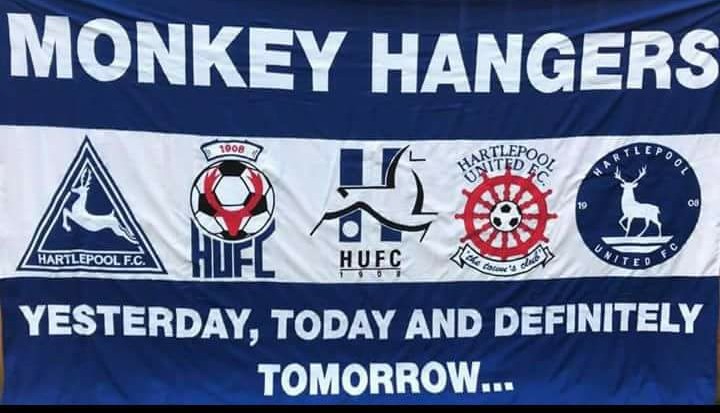 It’s well-known that the club has been in financial crisis, what happened to put you in that situation and how concerned were you about the future until the recent takeover?

At best, the club has been badly run over the past few years. The last owner gained possession of the club by default, he was owed money by the previous chairman, and wanted out long ago.

The owners prior to him, well the less said the better. We had a chairman who was, if I’m being kind, a Walter Mitty character. But, in my opinion was nothing more than a chancer.

There were times, in fact many times, this season when I really thought my club was going to die. It felt like we were on the brink for months.

How did the supporters (including Jeff Stelling of course) rally to help save the club and what part did the Supporters Trust play?

A lot of Poolies rallied around and there was a real determination to save the town’s club. But a special mention must go to Hartlepool fan Rachel Cartwright who raised thousands to help the club by setting up a Just Giving page. £48.000, of which was used to pay off an outstanding HMRC debt.

We also had a Save Pools day which took place on the day of the home match against Wrexham. Supporters from many clubs came along to The Vic that day to lend their support. Special mention must go to the Middlesbrough fans though, who turned up in their hundreds.

As for the Trust, they raised funds as part of a contingency plan, should all else fail. Hoping to keep some grade of football alive within the town. I believe they also took part in negotiations with prospective buyers and the local council too.

Raj Singh is now the owner of the club after his recent £1 takeover, with Craig Hignett ‘Director of Football’ – what are your initial thoughts on both men?

We must put our trust in Raj Singh, after all we have no other option. Mr Singh’s former involvement with rivals Darlington has left many Pools fans with doubts. Things ultimately didn’t end well with his time as Darlo chairman. But with Jeff Stelling alongside him, the hope is Mr Singh will prove himself here at Hartlepool.

Again I think many Poolies are split over the reintroduction of Craig Hignett to the club. Personally I think Hignett has an eye for a player and may be suited to a director of football role. Getting the right manager is paramount though.

What have been your highlights of the season on the pitch?

Few and far between. I’m really struggling. I like visiting new grounds, so our first season outside the football league has been good on that front. Although I was hoping the move was going to be a temporary one. And visiting National North grounds was certainly not part of any future plans.

Which players should we look out for this Saturday and why?

If not injured, Michael Woods is good on his day and can be a match winner. I always say when Woods plays well, Hartlepool play well. He just needs to be more consistent.

Another midfielder to keep an eye on, again if fit, is Josh Hawkes, who just got into the first team and is definitely one for the future.

Not sure, (Matthew) Bates has done well, but I still feel a new man is needed, with a new approach. Someone from outside the club. Someone who is going to shake the place up and ruffle some feathers. It’s long overdue.

What is Victoria Park like and which pubs nearby will welcome the travelling ‘Yellow Army’ this Saturday?

Victoria Park is a decent enough ground, especially at this level. The Torquay fans will be housed in the Rink End stand, behind one of the goals. Providing you don’t sit near one of the supporting pillars, you’ll have a good view of the playing surface.

As for pubs, you could try the Centenary Lounge which is situated under the Cyril Knowles stand. But which can be accessed from outside the ground. It’s about a minute walk from your turnstile too.

Or you could try the supporters club, the Corner flag, which is situated, obviously, in one corner of the ground, at the away end. Behind that is the Millhouse pub which welcomes away fans, but is very popular with home fans too.

Alternatively you could try Hartlepool Marina, which is a good place to both eat and drink and about a 10 minute walk to the ground. Parking close to the tall ship, to the left of the Royal Navy museum, on the far side of the road from the ground, may be a great option. It’s free too. Near the Jacksons Wharf pub.

We can be relegated on Saturday after a disastrous season. What do you make of our ongoing troubles and give us your match prediction?

Obviously I want Pools to win every match they play, but the pressure is off us now after Tuesday night and we can finally relax.

I’ve always had a soft spot for Torquay, despite an evening in Alleycats in the mid 1990’s, and have had some great weekends down there over the years following Pools. I’ve always liked pre and post match drinks in the Boot and Laces. So wish you the best of luck for the future. Score prediction 2-2.

Thanks for taking the time to answer our questions John, I’m always pleasantly surprised at how many people have a soft spot for Torquay United and wish us good luck, we certainly need it at the minute..