Hi Craig before we talk about the team let’s talk about yourself! You are chairman of the AFC Fylde supporters club – how long have you supported the team and what sort of events do you organise?

After being a football coach on weekends it was time to follow a local team and that was from 2012. I am now joint chairman of our supporters club with my football wife Ian French. We love organising fancy dress and for long journeys we set off at 6am from Mill Farm to allow us to stop off at some great places.

Its not just about the football. Quite a few from the Supporters Club are training for our final away game where we cycle to Wrexham which is 120 mile. The majority are amateur cyclists and have never cycled before. This is our 3rd season and we support 2 great charities on this cycle – see link for details http://www.afcfylde.co.uk/fans-show-pedal-power

You are challenging for the play-offs in your first season in the NL, did you expect to do so well after promotion from the NL North?

To be honest I would have been happy with mid table. I can’t believe how well we have done. To be in the play-offs is amazing & we have been spoilt this season.

What have been your highlights of the season so far?

Smashing Tranmere & Macclesfield at home and beating Orient & Hartlepool away are amazing. Eastleigh was one of my favourite away days as I arrived by a shopping trolley.

Can you achieve a second promotion in a row and are you ready to step up to League Two if it happens?

Nothing would surprise me with this club. Going up to League 2 would be the “stuff of dreams”. I’m happy in this league but Chally & our Chairman will have plans no doubt whilst we are in this position.

Danny Rowe has been banging the goals in for you, how do you rate him as a player and can you keep hold of him?

Rowey has been different class for us. Goal after Goal and he knows where the net is. A typical striker. He lives local with his family and is settled I believe. If a club up the ladder comes in for him then he owes us nothing, he’s also under contract but if a biggish offer comes in you never know. Off the pitch he bores you senseless. He could send a glass eye to sleep. He’s also the tightest person with money at Fylde, don’t ask him for a pint.

Which other AFC Fylde players should we be looking out for this Saturday?

This season Zaine Francis-Angol & Jordan Tunnicliffe have been fantastic, they have been consistent all season and seem to be getting better. Jonny Smith is on loan from Bristol City and has been fabulous on the wing for us, he’s only getting better. Our hot property is Serhat Tasdemir who is only 17 and premiership clubs are already looking at him which surprises nobody, he has a huge future no doubt. Sam Finley drives the team on in midfield and loves winding the opposition up.

What’s has been the key ingredients to the club’s meteoric rise in recent years and are your owners ambitious for the future?

Dai Davies our joint chairman & David Haythornthwaite love their football and are the people responsible for where we are now. Moving from Kellemergh Park (pub football ground) to Mill Farm has been amazing.

David has built an empire at Mill Farm and he knows that just having a football club nowadays won’t pay the bills. Mill Farm includes 5 star restaurant, Aldi, KFC, AFC Fylde College etc etc. To get us into the league by 2022 is the idea and what David Haythornthwaite set out to do. The part Chally has played in this on the pitch over the years is also second to none. 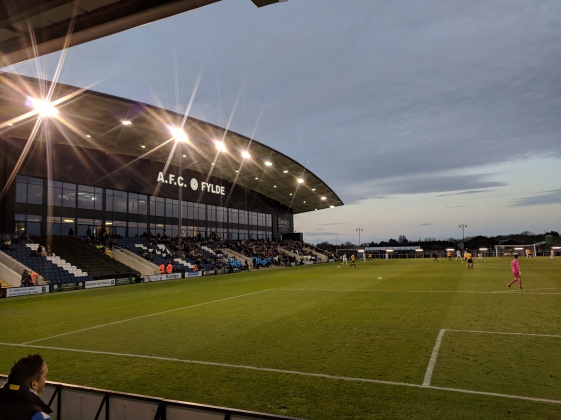 No doubt Chally (Dave Challinor) is the man. The work this man does is amazing. Hardest working person I have ever met, most of our fans have no idea what he does behind the scenes but a few of us are fortunate to know. Gives 110% into everything and is well supported by Colin Woodthorpe. Chally likes to play football and get the ball to the defenders who like to play out. No complaints with our football as we play the right way and can kill games off in 2 minutes with the way we attack.

I noticed on twitter that there will be a fancy dress theme for travelling supporters this Saturday! Will you bring many down and what’s the team’s away support like?

There is about 40 of us on the supporters bus travelling down on the Friday afternoon and around another 60 coming down on top of that. This was always a game we were looking forward to at the start of the season. We have had several fancy dress days this season and Saturday’s theme is “Surfs Up” & “Beach Party”.

This usually goes down well with home fans as we are a friendly bunch as people have found out this season. Our away support is growing but you have to remember how small Kirkham & Wesham is. We have come along way in 15 years since Caroline Bleeks & Rose McGardle used to watch us on a Sunday League pitch.

And finally, prediction time. After two recent losses we are staring relegation in the face, are you surprised to see us down there and what’s your prediction for Saturday’s match?

My Son Kieran & I were really looking forward to coming to Torquay at the start of the season and people like Steve Rossall & Ian French will love coming to a former league ground.

Torquay are a big club for this league so I’m surprised your down here tbh towards the bottom but we struggle against the teams at the bottom. We need to go on a run so I hope for a 3-1 win for Fylde & a good party in the away end.

Thanks Craig, sounds like you are having a cracking time of it in the National League. I’ll look out for you this Saturday! Good luck for the rest of the season.