I’m writing this report whilst travelling home from Ebbsfleet. It’s late, I’m in the middle of nowhere, miles out of London, I won’t be home until the wrong side of 11.30 and I have to be up early for work tomorrow. And I honestly, truly couldn’t care less. 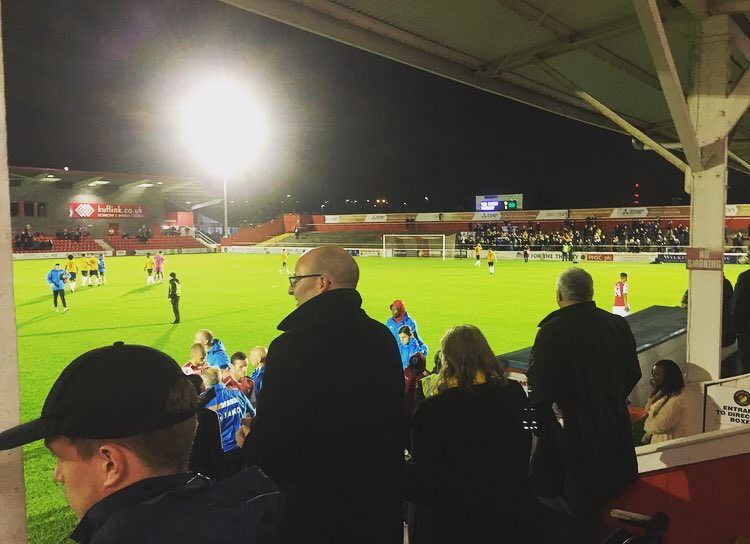 I’ve not stopped grinning for the last hour or so as – such is the life of an exiled Gull – I’ve not seen my football team win since the last game of last season. That’s the end of April. Six months ago. And they’ve just gone to high flying Ebbsfleet and played them off the pitch to pick up their first three points away from home this season. It feels so good.

I always fancied us to get something out of this game. Life under Gary Owers has been encouraging if not statistically rewarding, and it felt like just a matter of time before we began to put a run of results together.

Unchanged in both formation (3-4-1-2) and personnel from Saturday’s draw at Halifax, Torquay started the brighter and just about shaded a compelling first half low on chances. The dangerous Myles Weston flashed a shot wide and Danny Kedwell missed a glorious headed chance for the home side, whilst Luke Young forced the keeper into a smart stop with a vicious, swerving twenty-yard shot, but it was Torquay who were dominant – working hard off the ball and using it well when they got it. You sensed there could be reward for Gary Owers if he decided to twist rather than stick.

Fortune favours the brave and The Gulls attacked the second half with renewed purpose. Almost immediately Rhys Murphy missed a sitter. After a cross was flicked on to him just outside the six yard box, he only needed to place his shot to one side of the keeper or the other. He put it fractions wide of the post; a head in hands moment. Was that the chance?

At the other end Jack Powell came close with a sumptuous right footed curler, before it was Jamie Reid’s turn to go one better. The oft-criticised forward received a loose ball on the left around twenty five yards out and unleashed an unstoppable first-time shot into the top right hand corner. It was a piece of sheer brilliance and the travelling Yellows behind the goal rightly went wild.

Ebbsfleet immediately made their full quota of changes and threw caution to the wind, and only a point blank save from Vincent Dorel stopped a shot from a free kick creeping over the line, despite the home fans’ protestation to the contrary. United kept working hard and never lost their composure as five agonising added on minutes crawled by; a last ditch block from the heroic Josh Gowling keeping out Aaron McLean at the death.

Superb game management helped them soak up all the pressure with ease, and with the final whistle came a tidal wave of relief. Sheer joy. We’ve finally won on the road.

Man of the Match:

He just keeps getting better in my eyes. He didn’t put a foot wrong all evening; strong and precise in the tackle, and quick to surge forward and set up a counter attack on the break. Always seeming to make the right decisions and rarely conceding possession, he was a real threat down the left hand side and kept the dangerous Myles Weston very quiet. He looks far too good for this level.

Jamie Reid has to get a mention for his goal alone but there were strong performances right across the board. The midfield two of Evans and Young, in the second half particularly, won the ball back time and time again and pressed Ebbsfleet into making mistakes. Josh Gowling also deserves huge credit for winning every challenge, particularly as the game wore on and United had to deal with an aerial bombardment. He was immense.

In Darryl McMahon’s programme notes it said Gary Owers had been to watch Ebbsfleet recently and it showed. His tactical nous is absolutely superb and he set Torquay up perfectly to counter Ebbsfleet’s threats. Sticking with 3-4-1-2 again, the wingbacks worked a treat, with three solid centre backs and two dogged central midfielders dealing with the home side very comfortably. Deploying Jamie Reid through the middle as an out and out striker has been a stroke of genius, too.

The home side were incredibly disappointing for a team so high up in the table. One dimensional and predictable, their rigid 4-4-2 was very quickly found out by Owers’ men. Their two old stagers – Danny Kedwell and Aaron McLean – look like a potent striking duo on paper, but last night that’s all they were. Excellent players in their time but both looking devoid of any pace whatsoever and it made life rather easy for United. Ebbsfleet had no ideas and, quite frankly, looked a little complacent. They soon realised they were in a game but had no idea how to get themselves on top.

Neil Hair had a good game and went unnoticed most of the time. He got pretty much every decision right and even had to deal with a couple of unusual scenarios – the side netting coming free of one of the posts and, most unusually of all at this level, a pitch invader. He bizarrely managed to find five minutes to add on at the end but was otherwise excellent. The big call of the night was whether Dorel had carried a shot over the line and it remains to be seen whether he and his assistants were correct not to give it. The fact that none of the Ebbsfleet players seemed particularly incensed perhaps gives one an indication.

It has to be Jamie Reid’s goal. I’ve not been lucky enough to witness many of what are generally accepted to be Torquay’s greatest goals with my own eyes, so to be present for such a moment of brilliance was a real privilege. For it to be such a maligned player silencing his critics so comprehensively made it all the sweeter.

It was in as soon as it left his boot and I have to say I rather lost the plot as I celebrated along with the rest of the Yellow Army. Unfortunately I’d temporarily forgotten that I wasn’t with our own fans on the terrace – I was in fact in the press box in the main stand amongst the Ebbsfleet fans. I kept my head down for the rest of the night.

Rhys Murphy had a very quiet game. He works incredibly hard and doesn’t stop running, but his only two opportunities – a left footed shot from the edge of the box ballooned over the bar and the sitter he missed from a couple of yards – rather summed up his evening.

If he can hit the vein of form he showed initially at Forest Green and at Crawley then we’ll have a hell of a player on our hands. Right now all he can do is keep working and hope it begins to fall for him.

As I was summarising on the radio, this wasn’t really a proper away day for me! The rather amusingly named Kuflink Stadium is a typical non league ground, very similar to Aldershot’s Recreation Ground in that is very traditional (see also: rickety). It’s a little tired but inoffensive. On one side though is a new stand that looks very smart and the plans for further development – including replacing the open terrace at one end – are impressive. They’re a forward thinking club with plenty of potential and good backing, but pleasingly it’s all been achieved in a very sustainable fashion and they certainly aren’t living beyond their means. The close proximity to Ebbsfleet International, meaning fast trains to London and plenty of parking, makes it very convenient.

Entrance prices were very reasonable and, with it being unsegregated, Torquay fans were spread around the ground but the majority were in the open terrace. The driving wind and rain won’t have been pleasant but they won’t care.

It’s hard to overstate the importance of this result. Clearly things were improving under Owers, but without the points to back it up it meant nothing. The combination of four points from two impressive performances have breathed new life into a so far faltering season, and given Torquay fans reason to believe again. They’ve achieved nothing yet of course, and only consistent performances of this level will avoid a third successive relegation battle, but all of a sudden there’s cause for optimism and a little light at the end of the tunnel.

It’s taken time but the fitness levels have improved and the players clearly understand the system. It’s already been a long, hard season so far; this was one for the fans to savour.

John also makes up 50% of our friends at The National Obsession – a dedicated National League podcast, with a large sprinkle of witty humour.

And, as always, were also available on SoundCloud for your delectation: https://t.co/HmOkKQqPwN