Boy, this is going to be hard to write. Once again Torquay United fell to the bottom side in the National League with a performance that failed to deliver. Carvers header midway in the first half sealed the Gulls fate. Medford-Smith failed to head the ball out of play and Carver made no mistake from the cross.

United had a couple of decent chances. Just prior to the goal, Cundy headed over from a free kick and Whitfield had a shot that was easily saved by the hosts keeper.

1-0 Down at half time and stern words you would have expected from Gary Johnson.

A few minutes into the 2nd half Chorley won a penalty. The resulting kick was saved well by super Shaun and United still had life.

Duku & Keating entered the fray at the hour mark and instantly linked up well to win Torquay a corner. Sadly that was about as good as it got. Chorley had chances on the break but weren’t able to kill the game off.

As injury time approached, United almost undeservedly found a equaliser. A move into the box fell to Duku, who at a tight angle from four yards out had his shot tipped round the post by the keeper. McDonald came up for the corner in the final move but to no avail.

It was no more than Chorley deserved and Gary Johnson will have serious decisions to make as we approach the busy December period. It showed how reliant we are on the likes of Reid, Hall, Davis, CLE& Little to be in the squad. Take them out and you’re left with big boots to fill.

Shaun McDonald – 6: Saved the penalty to keep us in the game. His distribution got better as the game went on.

Kyle Cameron – 3:The worst I’ve seen him play. Seemed to be all over the place defensively and was weak in the air. On his day he’s great but he was far from it.

Ben Wynter – 4: Had a difficult day. Lost possession and made some poor decisions with the ball. Didn’t stop running however.

Medford-Smith – 3: At fault for the goal. Failed to head the ball out of play prior to the goal. Difficult day for the Reading loanee.

Robbie Cundy – 3.5: Slightly better than Cameron but both looked scared to make a tackle. Allowed Chorley too much space.

Joe Lewis – 4: Subbed after an hour. Nothing special.

Jake Andrews – 5: Good to see Jake back in the squad. Likes to create opportunities but sadly no one able to deliver. One of the better performers.

Matt Buse – 5: Didn’t really notice him, the ball was often lumped over the midfield. Did ok.

Whitfield – 5: Had a chance towards the end of the first half. Another one who suffered from the ball mostly being lumped forward. Created a few chances for us.

Kalvin Kalala – 4: Such a frustrating performance from him. One week he’s good, the next he’s poor. Didn’t really do anything of note to terrorise the Chorley back line. Subbed on the hour.

Saikou Janneh – 5:Another one to put in the frustrating category. Created a few good moves out wide but seemed frustrated as the game went on.

Keating: 5.5 – You know what you’re going to get with Rory. Works hard, runs his socks off. Gave us some energy towards the end.

Duku: 3.5 – He won a few headers, but boy is he not the answer upfront. Lacking confidence, missed a great chance at the end which looked like it was going wide anyway. He needs a goal (that isn’t at Devon County level!) I’d be surprised to see him in 2020.

Man of the Match: Shaun McDonald

Being dropped is never easy to get over, especially as a goalkeeper, but Shaun did well today returning after some games out of the starting eleven. He kept us in the game with the penalty save, his distribution (albeit not perfect) improved as the game went on and in a game where few players in Yellow impressed , he gets my MOTM.

Looked very defensive. Looked like we want from a 4-5-1, to a 5-3-2 to a 4-4-2 as the game progressed. Once again we lumped the ball forward hoping for the best. The midfield was almost non existent in the second half . Chorley dealt with it comfortably.

Chorley didn’t play like a side who were bottom of the National League. I made a point on my Twitter that if you were a neutral watching you would say we were the bottom side. They looked really up for it and deserved to win. Fans created a good atmosphere when they joined us for the first half although sadly a few supporters who looked very intoxicated decided to take things a bit too far which resulted in police and stewards having to separate supporters prior to the goal. Once they were gone there were no further issues. I liked the ground, very old school and a nice clubhouse and food.

Standard National League affair. Penalty was down the other end although it did look like a correct decision. Few questionable decisions but in the main one of the better ones.

Key Moment: Reid not in squad

As soon as the team was announced, many were concerned about where our goals were going to come from. Reid missing is a big loss for us. Today’s performance highlighted just how poorer we are without him. He may not have the best of games but you can normally rely on him to score a goal. I know we are down to bare bones at the minute but we never looked like scoring today. If you don’t score goals, you don’t win games. If Reid does leave in January we need to invest in a proven goalscorer at this level. Duku simply isn’t the answer.

Oh Manny. I really, really want him to do well here but he is nowhere near Reid’s ability in front of goal . He looks like a man derived of confidence and as mentioned earlier I’d be very surprised to see him still with us in 2020. Gary must see something in him to have brought in him but scoring goals in the Devon Bowl isn’t enough. Even his shot at the end of the game looked to be going wide. You just wonder if Reid was in that position would he have done better? He needs a goal and quickly. At the moment he isn’t the answer upfront

Well, as I type this report on the Supporters Coach back to Devon, it’s clear that we need our key players back fit and ready if we want to focus on promotion. Yes we have been unlucky with injuries recently but we have once again faced a side bottom of the league and come away empty handed. It was an inept performance. I love Gary but I’m not sure he got it right today. Granted we have injuries but Chorley always looked comfortable and it’s a third consecutive Saturday of poor performances. I’m hoping playing Eastleigh so soon will be a good thing. Get this performance out of our heads and show how good we are. We are certainly due a good performance. The National League rollercoaster continues on!! 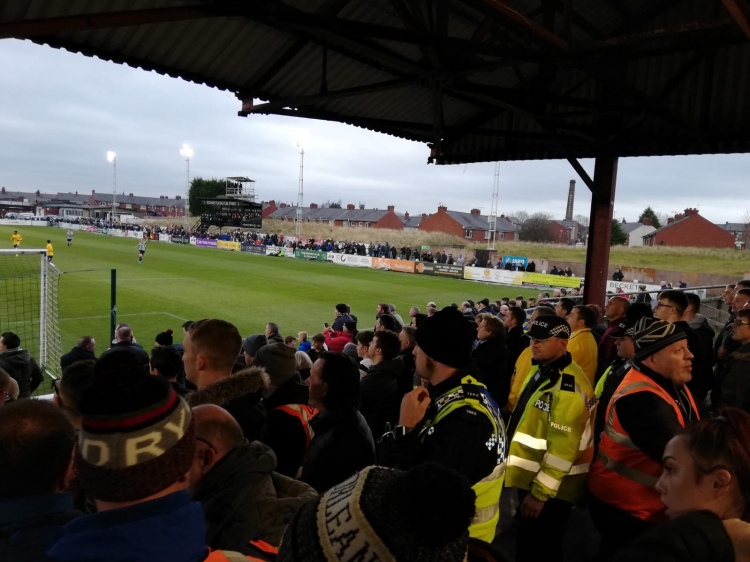 Depleted squad or not, that was another pitiful excuse of a performance. Simply not good enough #tufc

3 defeats on the bounce, Eastleigh away Tuesday night? Oh go on then #tufc