Was the Hemel Hempstead win a turning point in our season? The answer emphatically is NO as United turn in another wretched performance under the stewardship of a wretched manager. Despite a promising start, the ‘defending corners jitters’ (needs a catchier title I know…) return, to hand an organised Chippenham team a 1st half lead they defend with commitment and spirit, as the United side’s confidence deflates and boos ring around Plainmoor once more. Thoroughly depressing in every respect. Are we stooping to new lows I lose track..but anyone who can defend Owers with gusto after that game of football should have their head examined!

The start to the first half seems a lifetime ago, as the team display some much wanted drive and confidence gained from the Hemel win. Reidy, Andrews and Keating get involved and I actually feel like we’re getting somewhere..I’m a fool I know! Once Chippenham take our early sting and settle into the game they attack well, exploiting space in midfield and forcing some saves from Bass. Then a corner is swung into the box and Matt Smith heads in completely (I can’t stress completely enough!) unmarked. United are stunned and retreat back into their shells, players looking around for leadership..none is forthcoming. Ruairi does have a very presentable headed chance, but makes no contact whatsoever. Half-time and a quick drink in the Gulls Nest with TT contributor Rachel Malloch ensues..even the beer is tepid!

The second half is a total non-event. Chippenham sit deep and defend hard, whilst time wasting expertly. They can sense United are a team who can be grinded into submission and are soon proved right as the pain drags on. Two efforts from Opi and Jake find the target but fail to trouble the keeper, who’s only kept busy by numerous goal kicks being given away by wayward Gulls passes over the top. Subs are made but have no impact, the crowd get on the backs of Owers rather than the officials (especially for Keating’s substitution) and we don’t look like scoring in a month of Sundays…against Chippenham. The final whistle is blown on a gutless and pathetic performance, Owers scurries hurriedly back to the comfort of the dressing room and grim faces fill the terraces once more. Rubbish Gary? We’re not that good, it really is time to go chap.

Alex Bass 6 – Bass is not at fault for the goal and handles everything else ok.

Ben Wynter 3 – Wynter desperately needs coaching, the young lad has moments of promise but is wasteful in possession and soft in the tackle.

George Essuman 4 – The big defender struggles to cope at times with their attack and is sloppy with the ball, a shaky display.

Liam Davis 6 – Davis is ok, gives the ball away too easily (common thread alert) but in the main he does his job.

Opi Edwards 4 – After the Hemel game I was hoping for better. He has 2 shots on target, but struggles to do much else on a frustrating afternoon.

Chris Regis 3 – Regis does come alive at times but is just so slow and lethargic, for want of a better phrase he needs a boot up the ass! A very poor man’s Carlton Palmer (for the slightly older reader!!).

Jake Andrews 6 – Early on Jake is right in the action but fades as the game goes on, as Owers moves him around the pitch with no joy.

Jamie Reid 5.5 – First 20 mins is an 8 – after that supply is limited and Reidy slips out of the game without a shot or goal scored in anger.

Ruairi Keating 5 – Keating runs and runs which is good, but misses our best chance and is clearly angry at being substituted once again by his manager. The crowd chant his name soon after.

Brett Williams 1 – Brett only touches the ball once I think and I’m putting that as his rating! A captain should come on and rally the troops, Brett is not that man.

Jason Banton 2 – Is Banton bothered? It doesn’t appear so; no energy, no commitment, no nothing.

Andre Wright n/a – Is Andre that bad he can’t be trusted to play more than 10 mins…puzzling.

Man of the Match: Liam Davis

This year’s default option without Luke! Davis looks like the only permanent player who would command a place in the National League, and is decent up the left hand side – making runs to support the attack, whilst defensively assured. He still can’t cross very well and also gives the ball away (like everyone else), but on afternoons as bad as these Liam is my chosen one! If he takes home 25 TT MOTM awards this season, we’re in even bigger trouble than I thought!

Jake Andrews tries hard to make something happen, flying into more tackles than anyone and getting involved, unfortunately his skills are wasted with our dull and unimaginative tactics.

I’d like to mention Chris Ralph the groundsman. The pitch is impeccable and is something for us to be proud of (unlike the team). The only trouble might be it’s not big enough, as pass after pass is tonked wildly out for a goal kick or throw-in. Sort it out Chris!

Also everybody involved with the FanZone today – the event went very well by all accounts and kept the kids entertained (until the game started anyway!). Well done to all and keep up the good work.

Initially it’s a 4-4-2 as Andrews and Opi start out wide, which does trouble the Chippenham defence. Then the worst tinkerman in the business moves the pieces around to bulk up the midfield, which only serves to confuse the players and give us less width. It’s very poor and I’d to think any manager would make more sense of the TUFC tactics board than Gary. Even tactical deficiencies might be ok if the players looked galvanised and motivated by the manager, this isn’t the case and he looks a beaten man.

Chippenham attack with some verve and vigger in the first half, and their spurt of positivity is rewarded. They pick up loose balls, stick to the battle plan and take every opportunity to wind down the clock. Not pretty but I couldn’t begrudge them their win, they wanted it more and showed up our lack of commitment and disorganization by taking 3 pts home. Also a decent turn out from their supporters to Plainmoor (see below), they celebrated joyously at the final whistle. Remind me lads, what’s it like to be proud of your team and their performance? I am struggling to remember. 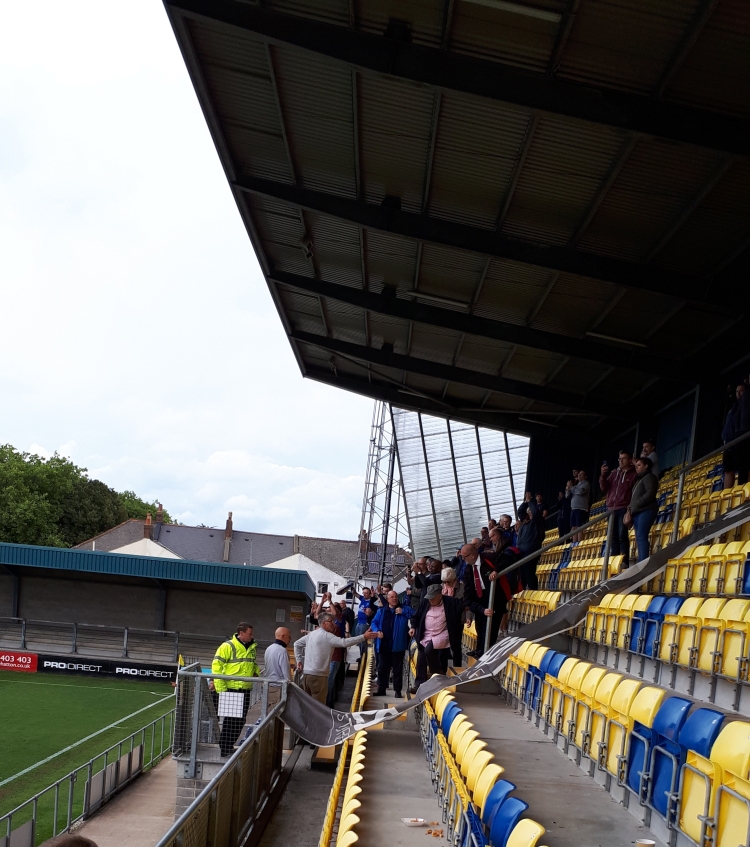 The officials have a mixed game and the Popside really get their claws into them as the torturous game limps on. I don’t think they were that bad really by NLS standards, making the odd wrong decision here or there, but nothing that affected the result – yes sorry that’s right, we can’t even blame them!

Ruairi Keating’s 1st half miss. It isn’t a total sitter but the striker should connect from 8 yards out and a goal before half time would have changed the game..probably! Much like most of Plainmoor I didn’t want the striker sacrificed later on, but if he wants to make it in the football world those chances have to be taken.

The worst player on the pitch (until the subs!). Poor Asa, he just doesn’t look like he’s got the legs for it and is constantly beaten to the ball by quicker Chippenham opponents. On the ball the midfielder struggles to find team-mates and the central combination with Regis is hard to watch. I thought Asa could be a key man this season and maybe that will still be the case, he doesn’t shy from the action I guess (where’s those straws to grasp?!). Unfortunately at the moment the midfielder is looking like a very poor signing. 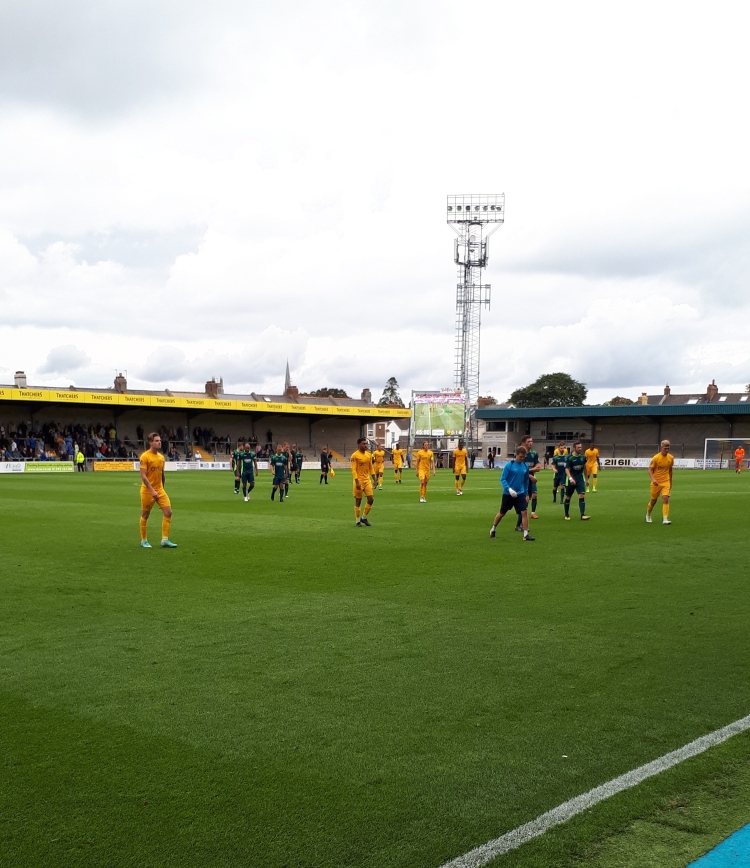 I should start calling this ‘Confessions of a Torquay Fan’! Give me leadership and positive direction off the pitch, give me a decent manager, give me players who can pass the football, give me a captain who looks like he cares…Torquay United give me strength. Will the manager go after this latest woeful showing and the crowd asking for his instant removal yet again? I doubt it – his job seems secure. When part-timers Chippenham Town deserve to beat you it is a shambles state of affairs (no disrespect to them). The ongoing turmoil continues and “We Want Owers Out” will soon become our most popular terrace chant…painful times at Plainmoor.